Lebanese President Michel Aoun said on Friday the cause of the titanic explosion in Beirut on Tuesday “has not been determined yet,” and authorities have not ruled out the “possibility of external interference through a rocket or bomb or other act.”

Aoun added authorities are also investigating negligence by port officials and accidental detonation and conceded that a stockpile of highly dangerous material had been kept at the port for years prior to the blast.

The official explanation for the explosion has undergone several mutations since Tuesday. At first, it was laughably presented as an accidental discharge of fireworks from a warehouse, but later the story of 2,750 tons of ammonium nitrate seized from a foreign ship and stored at the port began to take shape.

Reporters followed up on oblique comments about the seized cargo and determined it must have come from a ship called the MV Rhosus, which was impounded at the Port of Beirut for safety and technical violations in 2013. Lebanese officials theorized that welders working to repair holes in the warehouse walls might have touched off a fire that caused the ammonium nitrate to explode.

That story was called into question by documents uncovered on Wednesday that implied the cargo of ammonium nitrate was still onboard the MV Rhosus, which has been docked at the Port of Beirut for six years.

As recently as 2015, a legal document stated “the vessel and cargo remain to date in port awaiting auctioning and/or proper disposal.” A media report filed the previous year described the ship as a “floating bomb.” 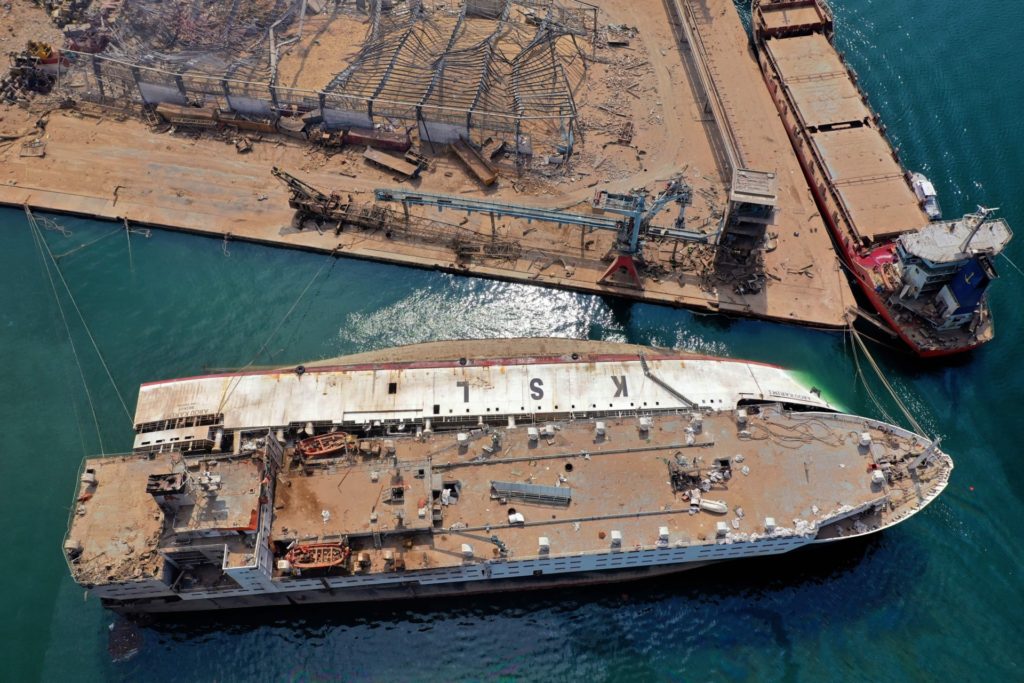 An aerial view shows Abou Karim, a livestock carrier ship, lying on its side next to other damaged vessels in the port of Beirut on August 7, 2020, three days after a colossal explosion of a huge pile of ammonium nitrate that had languished for years in a port warehouse left scores of people dead or injured and caused devastation in the Lebanese capital. (Photo by -/AFP via Getty Images)

On the other hand, a 2017 letter from the director of customs in Beirut warned about the “extreme danger posed by the storage of the goods in the warehouse under inappropriate letter,” and one letter from a team of lawyers in 2015 explicitly stated the cargo was moved into a warehouse at the port.

The Washington Post suggested the murky situation is partly due to various parties in Lebanon attempting to shift blame for the explosion. One of those parties is Hezbollah, the Iran-backed terrorist organization and Lebanese political party, which has good reason to be nervous.

As Jeffrey Lewis of the Middlebury Institute of International Studies pointed out to the Washington Post, the small fireworks-type “popcorning” of flashes and small explosions, clearly visible in numerous videos taken before the giant blast, look more like small-arms munitions cooking off than fireworks.

“Hezbollah is known to exercise control or leverage over the airport and the port, for various reasons having to do with their activities. There’s a pre-existing notion in the psyche of most Lebanese that these facilities are either dominated by Hezbollah directly or through various surrogates,” said Firas Maksad of George Washington University’s Institute for Middle East Studies.

The U.S. government sanctioned Hezbollah has been sanctioned by the U.S. government for using the Port of Beirut to smuggle contraband, including drugs, small arms, and precision-guided missiles. The Jerusalem Post claimed on Thursday that Hezbollah has its own “special terminal” for receiving weapons at the port that bypasses customs inspectors, and the munitions are usually stored in port warehouses until Hezbollah can distribute them to remote bases and arms depots.

As for the ammonium nitrate, Hezbollah has a well-documented interest in using the chemical to make bombs. The Washington Post noted there is not yet any hard evidence that Hezbollah was aware of the ammonium nitrate stockpile or controlled it, but the possibility will surely be investigated. Most countries have strict rules against storing so much ammonium nitrate in one place and mandate strict safety protocols.

The substance remains widely used, and frequently shipped in substantial quantities, because there is high demand around the world for ammonium nitrate fertilizer, but not many sources for obtaining it in bulk. Russia is currently the leading exporter of ammonium nitrate and was reportedly the source of the cargo Lebanon seized in 2013. 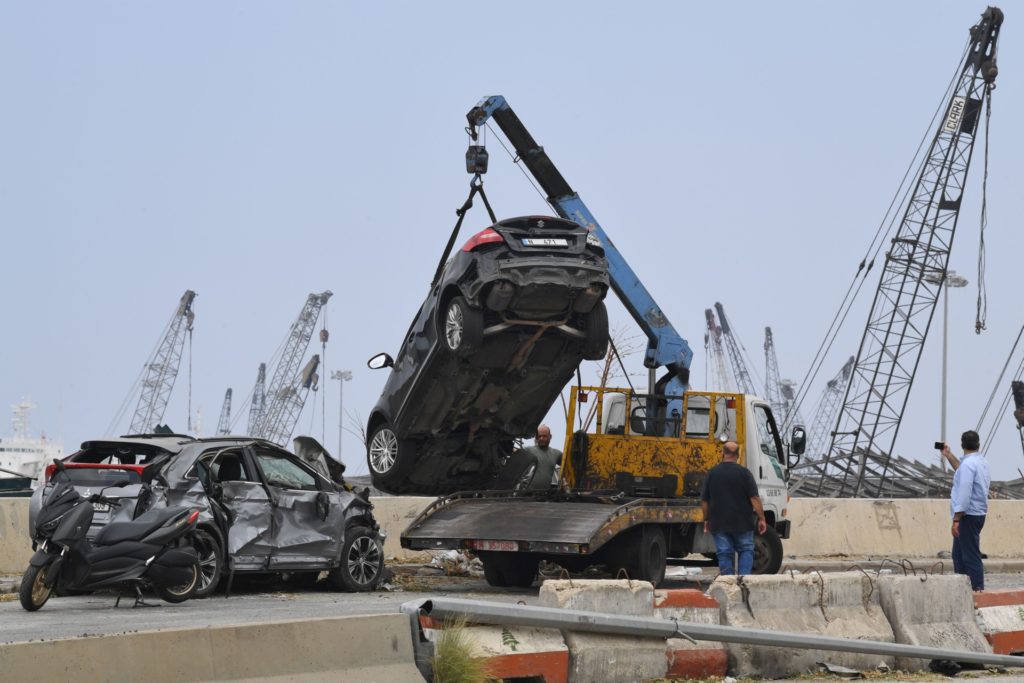 Lebanese people remove a damaged car from an avenue overlooking the port of the Lebanese capital Beirut, on August 7, 2020, in the aftermath of a massive blast in the harbour that shook the city. Three days after the monster explosion that disfigured the city in a matter of seconds, the clock was already ticking down on any potential survivors’ chances, as rescuers from Lebanon, France, Germany, Russia and other countries worked shifts to try to find an entrance to a control room buried under metres (yards) of rubble.  (Photo by -/AFP via Getty Images)

“Hezbollah finds itself uncomfortably positioned as the principal backer of the government presiding over a thoroughgoing collapse of the Lebanese state and society. It will not easily shake off blame for the Beirut blast, or for the Hariri assassination,” Bloomberg News predicted, referring to the assassination of former Lebanese Prime Minister Rafik Hariri in 2005. Experts expect a verdict against four Hezbollah operatives linked to the assassination from a U.N. tribunal soon and could be especially bad news for Hezbollah in the wake of Tuesday’s explosion.

Even if Hezbollah weapons were not involved in the deadly blast, it could still feel the wrath of angry Lebanese who have taken to the streets to protest the incompetence and corruption they blame for the catastrophe.

News that high-level officials had ample reason to know about the danger of the ammonium nitrate stockpile during the six years it remained at the port led to furious demonstrations in the streets on Thursday night. Every faction in Lebanon’s complex and already fragile government will be eager to avoid blame for the explosion. 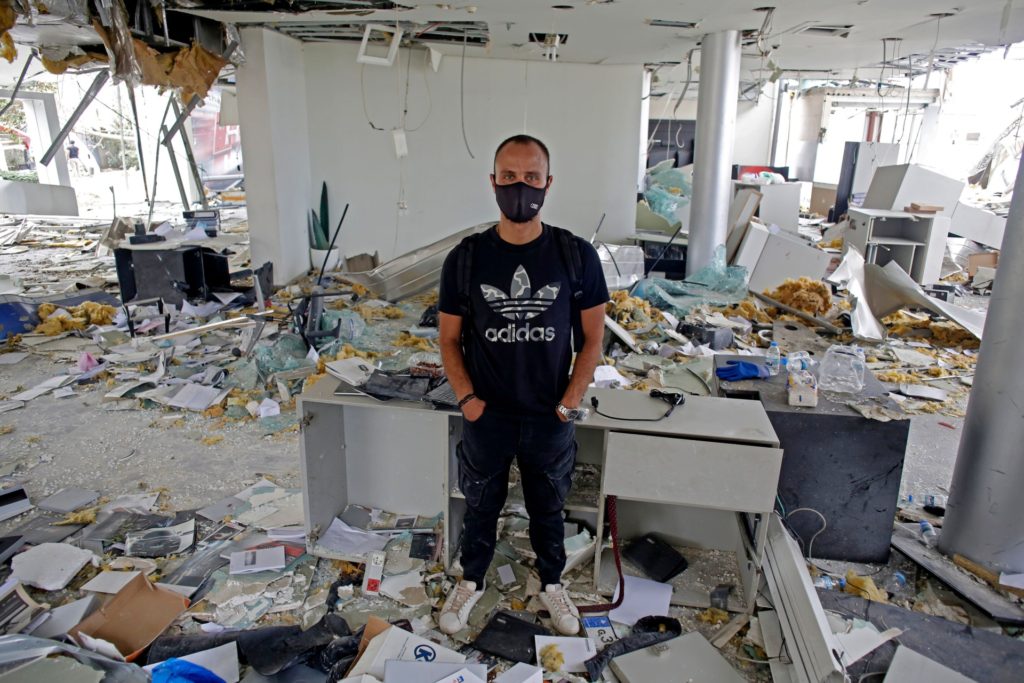 A man stands in the rubble of his damaged office in the Lebanese capital Beirut on August 7, 2020, three days after a massive explosion shook the Lebanese capital. The blast, which appeared to have been caused by a fire igniting 2,750 tonnes of ammonium nitrate left unsecured in a warehouse, was felt as far away as Cyprus, some 150 miles (240 kilometres) to the northwest. The scale of the destruction was such that the Lebanese capital resembled the scene of an earthquake, with thousands of people left homeless and thousands more cramming into overwhelmed hospitals for treatment. (MARWAN TAHTAH/AFP via Getty Images)