CARACAS – The start of Venezuela’s 2020-2021 school year is marred with problems both old and new, and under an ongoing fierce Chinese Coronavirus lockdown that prevents you from leaving the country.

A crumbling infrastructure, lack of public utilities, teacher protests and strikes over their low wages, and other logistic complications have created the most uncertain circumstances surrounding a school year in modern Venezuelan history, depriving many young children and teenagers of proper education.

The question of how and when will schools reopen within the framework of Venezuela’s coronavirus lockdown has been a source of confusion for parents and students throughout the year. All classes were suspended in March 2020 following the start of the country’s quarantine.

The socialist regime of Venezuela ran a poll through their Patria (“fatherland”) system – a Chinese-inspired system that controls from our gasoline rations to government handouts – to let people “decide” what the best course of action should be. 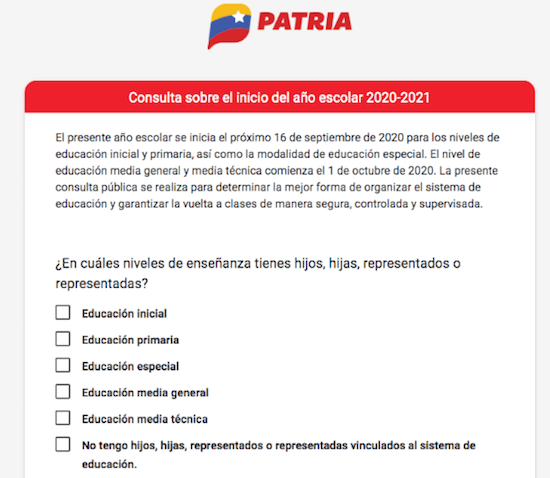 As with many aspects of our life under this regime, the choice was already made for us. Having a voice and say in the country’s affairs is but a cruel illusion here – just take a look at our past and upcoming rigged elections.

Socialist dictator Nicolás Maduro announced September 16 as the start of Venezuela’s 2020-2021 school year for primary, elementary, and college education, with all classes being strictly online or “distanced.” The start of high school is slated for October 1. Schools will only open during the weeks of “flexible” quarantine and only for students and teachers to receive “pedagogical assistance,” which itself does not imply a reopening of classrooms, as all in-person classes are suspended until January 2021 at the earliest.

The nation’s teachers have widely rejected Maduro’s decision, deeming the start of this school year irresponsible as the crumbling infrastructure of our schools, coupled with the lack of access to basic utilities, makes it hard to engage in proper coronavirus prevention measures. At the same time, they are demanding better wages. Currently, a teacher earns an average of Bs. 1,600,000.00 a month — which roughly translates to less than $4.70 using the regime’s official exchange rate.

Such inhumanely low wages make it impossible for teachers to feed their families. Many of them were already working only in good faith to teach others.

It’s worth mentioning that leftist organizations such as the Chicago Teachers Tribune openly advocate and defend this socialist system.

Online education does seem like a viable compromise, and it may very well be the case in other countries. But here, the model of online education has to clash with the reality of socialist Venezuela — where the only winning move is not to play. The state of the country’s infrastructure and economy presents a series of obstacles:

Approximately 30 percent of Caracas has lost telephone and internet connectivity with CANTV, and it was only a matter of time before my street became part of those statistics. As of the time of working on this article I’ve gone through two weeks (and counting) without CANTV internet service, which prevents any student living on this street from engaging in online classes until the matter is resolved.

Mobile data providers such as Movistar and Digitel could perhaps serve as alternatives, but these can rack up pretty high bills. Having spent the past four days trying to work on this article while dealing with Movistar’s shoddy network coverage, I can safely say that this is not fit for e-learning at all.

While not often mentioned, the critical gasoline shortages the country continues to face are another factor to consider if and when classrooms are reopened. Problems such as the ones I’ve mentioned above are what have prompted teachers to protest outside the people’s Ministry for Education and denounce this brand new school year as fraudulent and deceitful.

On a more personal level, I have two young cousins that were in sixth grade when the quarantine hit and classes were suspended nationwide. The public school they attend made them finish their classes through Whatsapp messaging, giving them barely any material beyond a few homework assignments that lacked proper explanation. Their teachers, ideologically aligned with the socialist regime, were more concerned with filling quotas than providing students with quality education. As such, I’ve tried to assist them and teach them to the best of my capacity, retreading sixth-grade material after over two decades. They were slated to start middle school this month, but now they find themselves in limbo, without even internet access to engage in e-learning until their street’s outage is solved.

This school year finds itself in a “damned if you do, damned if you don’t” scenario, as the collapse of Venezuela’s education system is an ongoing problem made only worse by the pandemic. On one hand, reopening our schools will not do much, as the schools themselves are under such dire and precarious conditions — a situation made worse by the fact that schools are not being properly funded by the socialist regime and cannot receive supplies directly via donations, only the government is authorized to do so.

Many parents no longer have the means and resources to send their kids to school (food, study materials such as books or pencils). This situation has led to cases of malnourished kids fainting in classrooms and an alarming number of empty classrooms and massive school absenteeism. During the worst years of socialism-induced shortages and rations, it was common to see children skip school days just so that they could wait in line to be able to purchase their weekly allotments of toilet paper, rice, oil, flour, and other products, something that was determined by the last number of their Venezuelan ID cards.

Another aspect to consider is the ongoing ideologization of Venezuela’s public school curriculum that has ramped up over the past five years, which puts an emphasis on promoting pro-socialist and “anti-imperialist” messages throughout children’s education and twisting Venezuelan history to suit the Socialist Party’s narrative, going as far as to exalt the “achievements” of the Bolivarian Revolution.

The low wages that teachers earn have prompted them to stop leading classes, which leaves schools with a grave deficit in teachers. Some have chosen to flee the country, while others have been victims of workplace harassment for not agreeing with the schools’ ideological changes.

On the other hand, the prospect of engaging in online classes in post-collapse socialist Venezuela is nothing short of a failure.

Irregular academic years and disruptions in schedules became commonplace during these two decades of socialist revolution. I did lose my fair share of high school and college days to protests and times of intense turmoil, but nothing I experienced during those days begins to compare to the current calamities — my education may have been deficient, but at least it was something.