An Indonesian health worker was smeared with fecal matter as he tried to retrieve a coronavirus patient from his home this week for medical treatment in East Java on Tuesday, Coconuts Jakarta reported.

The city of Surabaya organized Chinese coronavirus testing for residents of a local apartment complex on September 23. The results of the swab tests were released on September 28 and “included a possible coronavirus infection for an unnamed male resident who suffers from underlying health conditions,” according to the report.

The following day, city healthcare workers visited the apartment complex to pick up the coronavirus patient, evidently as part of a planned quarantine and treatment process. Upon arrival at the patient’s residence, however, the medics “encountered resistance from his wife and children,” the Indonesian news outlet revealed.

“They kept resisting, and then they did that (smeared excrement) on the healthcare worker’s hazmat suit,” Surabaya city administration spokesman Febriadhitya Prajatara told reporters on Wednesday. 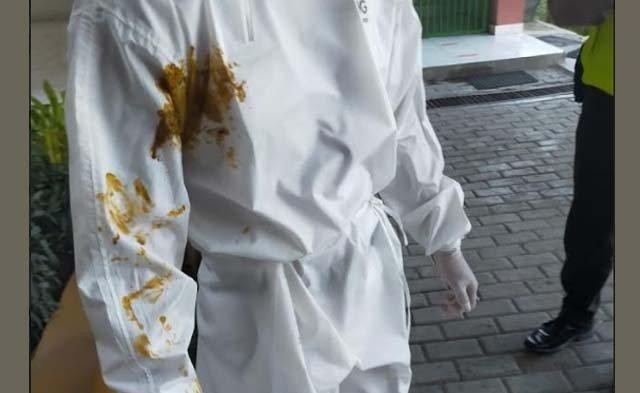 A healthcare worker smeared with excrement when picking up a patient in Surabaya, East Java. Photo: Surabaya City Administration

Despite the foul protest, the patient’s family eventually acquiesced, allowing the medical team to transport their relative to a local hospital. None of the people involved in the incident were criminally charged for their actions, according to the report.

News of the abusive attack on the East Java healthcare worker comes shortly after a report on Monday revealed that at least 123 doctors treating coronavirus patients in Indonesia have died from the virus since the country’s initial outbreak in March.

The association said it had recorded a significant rise in the number of doctors who died from coronavirus over the past two months. The group cited a recent spike in the number of new coronavirus cases nationally as a major contributing factor, explaining that “the high number of patients caused extreme fatigue among health workers, making them more vulnerable to the virus.”

Indonesia currently has the second-highest number of reported coronavirus cases among member states of the Association of Southeast Asian Nations (ASEAN) with 291,182 infections.