The World Health Organization (W.H.O.) announced on Tuesday that its investigation into the origin of the Chinese coronavirus in its home city, the central metropolis of Wuhan, yielded no significant evidence – an unsurprising conclusion given that Chinese officials admitted to destroying early virus samples and other critical evidence last year.

The W.H.O. team, working in conjunction with Communist Party experts, spent much of last week visiting sites of interest in Wuhan, including the Wuhan Institute of Virology (WIV) – the source of much speculation of a potential pathogen leak – and the Huanan seafood market, where Communist Party officials initially claimed the virus had originated. The results of the team’s investigation, as revealed on Tuesday, echoed Chinese government claims that the virus may have originated in a different country and entered China on frozen food products, a theory that most international scientists consider highly unlikely.

W.H.O. experts also claimed to find no evidence of any cases of Chinese coronavirus in Wuhan before December 2019. In March 2020, the South China Morning Post published a report, citing leaked Chinese government data, showing that the first diagnosed case of Chinese coronavirus occurred in Wuhan on November 17, 2019. Beijing has yet to confirm or deny the report and the W.H.O. did not address it on Tuesday.

No evidence exists of any Chinese coronavirus cases in humans anywhere in the world before November 17, 2019. Some research suggests early cases of coronavirus identified in Italy and Brazil in the same month, but not prior to that date.

Liang Wannian, a researcher on the W.H.O.-Communist Party research team, claimed on Tuesday that the first known case of coronavirus in Wuhan was diagnosed on December 8, according to the Global Times state propaganda newspaper. Liang also denied that the Huanan seafood market was the definitive source of the virus and claimed, “there is no evidence showing how the virus was introduced into Huanan seafood market.”

Peter Ben Embarek, the head of the W.H.O. team, told reporters that the virus most likely did not originate from the WIV because researchers found no evidence of the virus there when they visited the laboratory.

“Currently, there is no evidence to suggest that handling food or consuming food is associated with COVID-19 [Chinese coronavirus],” the official page of the U.S. Centers for Disease Control (CDC) reads. It specifies frozen food handling in its description of food transmission probability.

Neither Ben Embarek nor the rest of the investigative team appeared to address the lack of evidence that frozen food can infect individuals – as the CDC noted, there is no evidence in the United States that any food can make a person sick with coronavirus disease, despite no American state shutting down food purchases at major cold-chain distributors like Walmart and major supermarkets. 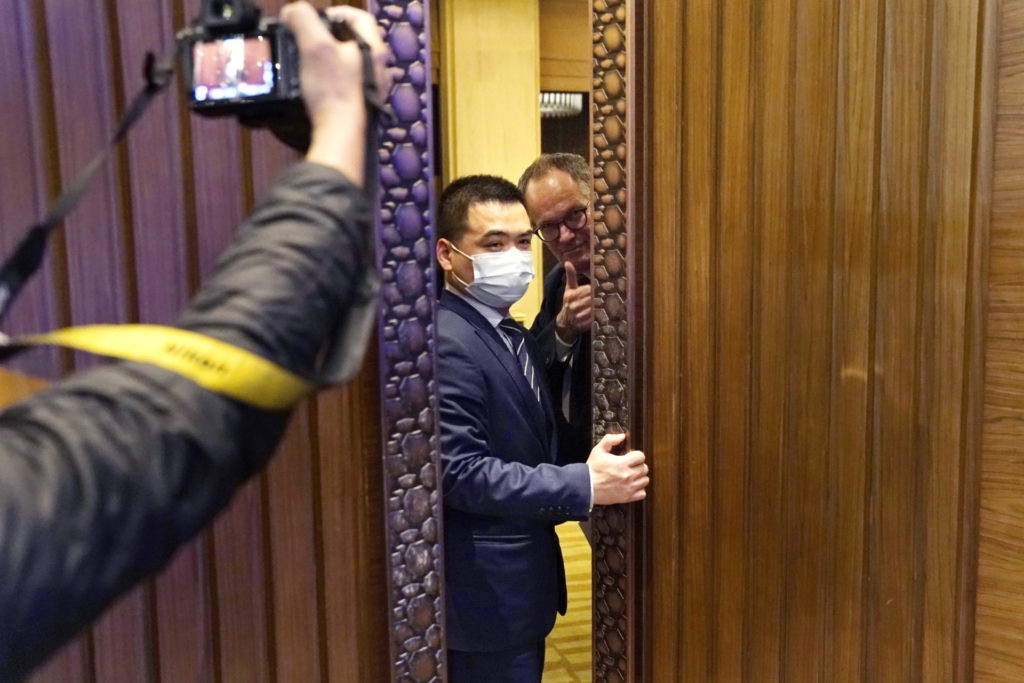 Peter Ben Embarek, of the World Health Organization team, gives a thumbs up as he is led away after a WHO-China Joint Study Press Conference held at the end of the WHO mission in Wuhan, China, Tuesday, Feb. 9, 2021. (AP Photo/Ng Han Guan)

Ben Embarek also told reporters there was “no indication” that the virus originated in the WIV, without addressing the impact that Chinese officials destroying evidence linked to the outbreak could have on the team’s ability to find any such indication. The team did not address Chinese government officials destroying early samples of the virus and “disinfecting” the market, a process that would erase any traces of the virus there.

Prior to the beginning of the study in January, Ben Embarek told reporters he believed it was “still worth” visiting location like the Huanan market despite the widespread destruction of evidence.

“There are information and records everywhere, so it is still worth exploring these places,” he claimed.

“Based on comprehensive research and expert opinion, we decided to temporarily manage the pathogen causing the pneumonia as Class II – highly pathogenic – and imposed biosafety requirements on sample collection, transport and experimental activities, as well as destroying the samples,” Liu Dengfeng, an official at China’s National Health Commission, said in May 2020. Liu said the move was necessary to “prevent the risk to laboratory biological safety and prevent secondary disasters caused by unidentified pathogens.”

Journalists in Wuhan in early 2020 found the Huanan market closed off to visitors and regularly “disinfected.” While Communist Party officials regularly insisted that the market largely sold conventional seafood, reports from the site identified signs advertising exotic animals that may be potential reservoirs for disease, some of which are not legal to sell in the country.

The W.H.O.’s conclusions on Tuesday contradicted Chinese officials in the early days of the pandemic.

“The origin of the new coronavirus is the wildlife sold illegally in a Wuhan seafood market,” Gao Fu, director of China Center for Disease Control and Prevention, said in January 2020, as quoted by Reuters. Gao also claimed an overwhelming number of early cases in Wuhan were directly linked to the Huanan market, which the W.H.O. team did not appear to believe.

The team concluded that the W.H.O., finding no evidence in an area where China admitted to destroying evidence, should look for the origin of the virus in other countries.

“It’s important to make sure we are not geopolitically bound, as the virus passing from animals to the Huanan market could take a long path involving movement cross borders and travels before reaching the Huanan market,” Ben Embarek said, according to the Global Times.

The Chinese Communist Party has repeatedly demanded the W.H.O. seek out the source of the coronavirus in the United States, despite no significant evidence suggesting the virus originated there.