China quickly offered “friendship and cooperation” to the Islamist extremists in official statements on Monday, contrary to the Biden administration’s frequent threats that the Taliban would become international pariahs if they seized control of Afghanistan by force.

The Chinese Foreign Ministry on Monday accepted the Taliban’s conquest as “the choice and will of the Afghan people.”

Foreign Ministry spokeswoman Hua Chunying oddly referred to the Taliban’s military occupation of Kabul as a “truce” – at the same time as Taliban thugs were reportedly going door-to-door in captured cities to hunt down officials of the toppled civilian government, killing women who seek employment and education, and dragging 12-year-old girls off as jihad brides.

“China hopes that the Taliban will implement its previous vows to establish through negotiation an open and inclusive Islamic government and act responsibly to ensure the safety of Afghan citizens and foreign missions in Afghanistan,” she said.

China has always played a constructive role in promoting a political solution to the Afghan issue, and maintained contacts and communications with the Afghan Taliban and other sides, on the basis of full respect for the sovereignty of the Afghan state and the wishes of the various factions in the country.

Hua refused to answer questions on Beijing plans, or lack thereof, to formally recognize the Taliban’s “Islamic Emirate,” saying only that her government has “maintained contact and communication” with the extremists as they marched across Afghanistan. 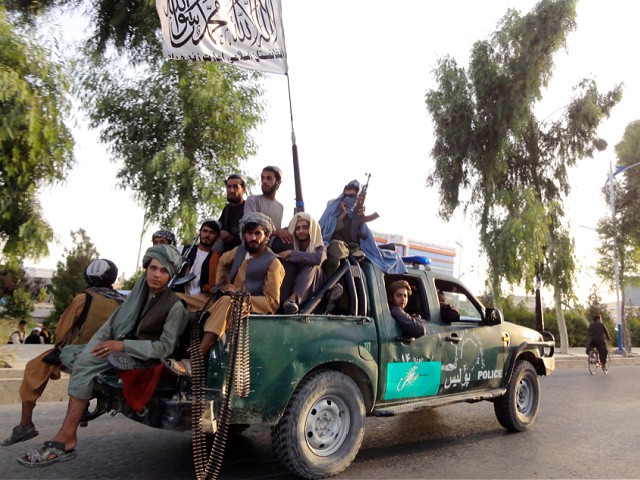 “Afghanistan’s Taliban has expressed many times a desire for good relations with China, with an expectation that China will take part in Afghanistan’s rebuilding and development process, and will not allow any forces to use Afghanistan’s soil to harm China,” she said. “We welcome this.”

The South China Morning Post (SCMP) noted on Monday that China’s embassy in Afghanistan “is continuing to operate as normal, and its ambassador and embassy staff will remain in their posts.” Afghanistan’s ambassador to China remains comfortably stationed in Beijing.

Reporting on Hua’s press conference, China’s state-run Global Times quoted Taliban officials who said they were working to “ensure that the transition process is completed safely and securely, without compromising the lives, property and honor of anyone.”

Wang pointed out, “We hope the Afghan Taliban will make a clean break with all terrorist organizations including ETIM (East Turkestan Islamic Movement) and resolutely and effectively combat them to remove obstacles, play a positive role and create enabling conditions for security, stability, development and cooperation in the region.”

Baradar told Wang that “the Afghan Taliban will never allow any force to use the Afghan territory to engage in acts detrimental to China. The Afghan Taliban believes that Afghanistan should develop friendly relations with neighboring countries and the international community.”

China reportedly secured promises from Taliban leadership that they would not harbor anti-Chinese insurgents, especially those from restless Xinjiang province, home of the oppressed Uyghur Muslims. The Taliban reportedly promised it would also control Afghanistan’s borders to prevent a flood of refugees from pouring into China.

A Taliban spokesman welcomed China to post-conquest Afghanistan as a “friend” in early July.

“We have been to China many times and we have good relations with them. China is a friendly country that we welcome for reconstruction and developing Afghanistan,” the Taliban spokesman said, hoping for big Chinese investments “as soon as possible.”

Chinese state media insisted in July that the Taliban was not a terrorist group and not an “enemy of China’s national interests.”

The situation around Afghanistan is rather complex, but China clearly knows what its national interests are. We should not create enemies for ourselves at this crunch time. In particular, we should not easily reject the goodwill from the Taliban, which is of great significance to our exerting influence in Afghanistan and maintaining stability in Xinjiang.

Other Chinese state media editorials expressed dismay at the departure of U.S. forces under Biden and said China would reluctantly step in to restore order after the “turmoil” caused by American withdrawal.

On Sunday, Hu approvingly and mirthfully quoted Chinese “netizens” who said, “the power transition in Afghanistan is even smoother than the presidential transition in the U.S.”

The U.S. Special Inspector General for Afghanistan Reconstruction (SIGAR) reported in July that China substantially increased its investments in Afghanistan as the date set by President Joe Biden for U.S. troop withdrawal approached, securing a strong interest in Afghanistan’s trillion-dollar minerals industry even as the now-defunct government in Kabul refused to award contracts to the U.S. and other Western companies.

In February, U.S. Central Command (CENTCOM) commander Gen. Joseph Votel told the U.S. Senate that China was using its massive Belt and Road Initiative (BRI) to “provide access and influence” across the Middle East, including Afghanistan.

Votel said BRI, ostensibly an international infrastructure program, “could support and mask longer-term military and political objectives,” which include “trying to displace the U.S. from its position of influence.”

The Taliban announced its approval of China’s huge mining projects in 2016 and said it would not attack Chinese interests in the provinces it was then contesting.

The Biden administration spent the past week frantically warning the advancing Taliban that it would be completely isolated by the international community if they seized power by force. The nadir of this effort was reached on Wednesday with White House Press Secretary Jen Psaki’s widely-mocked admonition that the Taliban should “make an assessment about what they want their role to be in the international community.”

The Taliban clearly knew all along it would have all the support it needed from China, which can provide economic engagement, diplomatic recognition, and cover at the U.N. Security Council. Russia and Turkey are also reportedly preparing to recognize the Islamic Emirate of the Taliban as the official government of Afghanistan.