Indonesian security forces have neutralized the leader of a local affiliate of the Islamic State of Iraq and Syria (ISIS) known for beheading and mutilating Christians, the Jakarta Globe reported Monday.

A joint team of Indonesian police and military personnel killed ISIS leader Ali Kalora on September 18 in a “jungle shootout” in the mountainous Parigi Moutong district of Central Sulawesi, an island located east of Borneo. Parigi Moutong neighbors Poso district, which is considered a jihadist hotbed by Jakarta.

“Ali Kalora was the most wanted terrorist and leader of MIT,” Central Sulawesi’s regional military chief, Brigadier General Farid Makruf, told reporters on Saturday. “MIT” is the Indonesian acronym of the East Indonesia Mujahedeen, a jihadist group that pledged allegiance to ISIS in 2014. 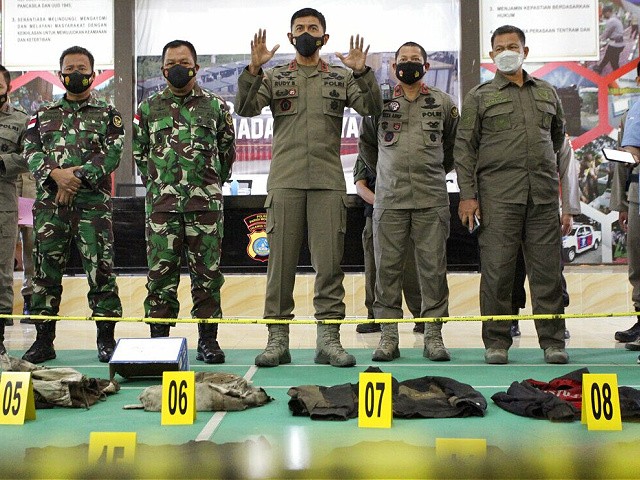 Central Sulawesi Police Chief Rudi Sufariadi, center, speaks to the media as the items confiscated from Ali Kalora and Jaka Ramadan, two militants who were killed during a shootout with security forces, are displayed for the media during a press conference at the Parigi Moutong Police Station in Parigi Moutong district, Central Sulawesi, Indonesia, Sunday, Sept. 19, 2021. (AP Photo/Josua Marunduh)

Indonesian security forces killed Kalora and “another key MIT member identified as Jaka Ramadhan” on Saturday according to the Jakarta Globe.

“Police seized an M-16 rifle and explosive devices from the scene,” the newspaper revealed.

“We had six on the wanted list: two were shot to death, only four remain,” Central Sulawesi Police Chief Insp. Gen. Rudy Sufahriadi said on September 18.

Indonesia is the world’s most populous Muslim-majority country. Roughly 87 percent of Indonesia’s population of 277 million people practice Islam. MIT has claimed responsibility for the murders of several police officers and minority Christians on Central Sulawesi over the past decade. Indonesia’s National Police had, until recently, fought a losing battle against MIT among the island’s remote jungles, losing eight of its members to the militant group in the past ten years.

Kalora took over the leadership of MIT in July 2016 after Indonesian security forces killed its then chief, Abu Wardah Santoso. Kalora had successfully evaded capture or killing by Indonesian forces since then, owing to his innate knowledge of the island’s jungle terrain. The MIT leader was born Ali Ahmad approximately 40 years ago, later assuming the nickname of “Kalora” as a nod to his Central Sulawesi home village of the same name.

Kalora ordered and personally led MIT to attack a Christian family in the Central Sulawesi district of Sigi on November 27, 2020. The Jakarta Globe described the ambush as a series of “gruesome murders.”

“One of the four victims was beheaded and two others were mutilated,” the newspaper recalled.

The barbaric attack prompted the Indonesian National Police to form a “special unit called Madago Raya Task Force in January to hunt down Ali and his men.”