A large mob of unidentified gunmen stormed a crowded bazaar in northern Nigeria on Sunday, killing at least 43 people and wounding many more.

“Forty-three people have been confirmed dead following the attack by bandits in Goronyo village,” Sokoto government spokesman Muhammad Bello said in a statement, while other reports speak of 49 dead.

“It was a market day and there were many traders,” Bello told Agence France-Presse (AFP).

Witnesses said the weekly market was filled with people when the terrorists, riding on over 100 motorcycles, surrounded the area and opened fire on buyers and sellers.

The popular Goronyo market is open every Sunday hosting traders from Sokoto and neighboring Nigerian states as well as from the Niger Republic. 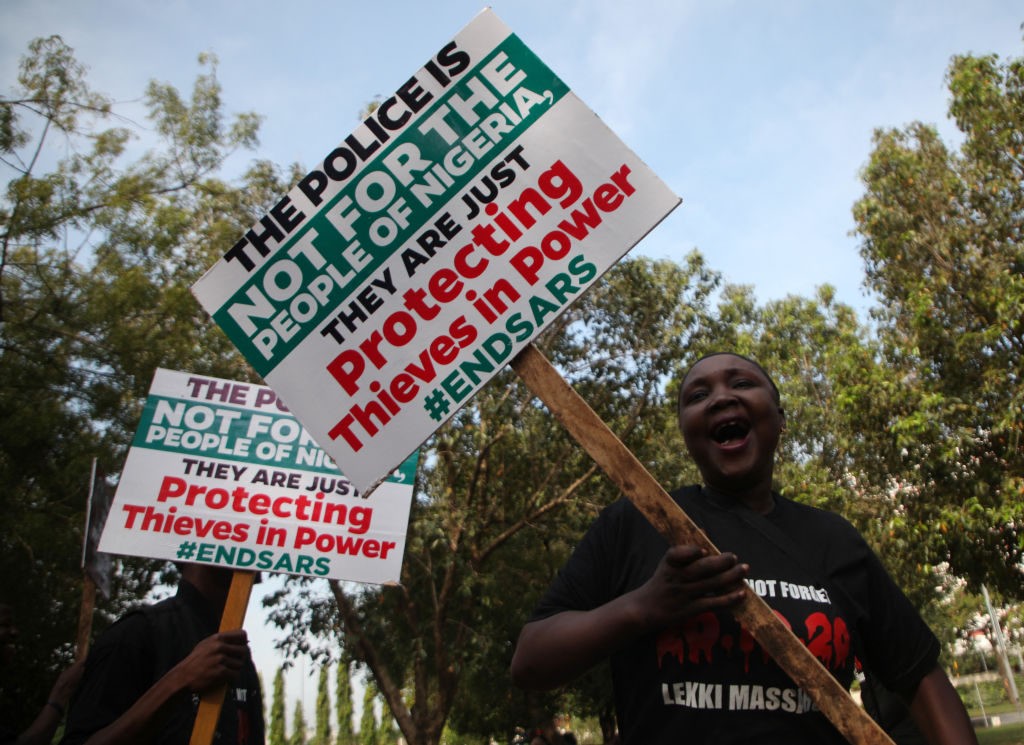 A woman displays a message on a placard during a protest to commemorate one year anniversary of EndSars, a Nigeria protest movement against police brutality at the Unity Fountain in Abuja, on October 20, 2021. (KOLA SULAIMON/AFP via Getty Images)

Eight of the traders killed were from Goronyo while the remaining ones came from the neighboring villages, reported Abdulwahab Yahaya, the chairman of Goronyo LGA.

Some of those present claimed that the attack was carried out by different bandit groups working together as a team.

One witness, who gave his name as Salihu, said the assailants raided the village market from the neighboring Gundumi forest which is few miles away.

“I believe it was a joint attack by bandits from different groups because of the way it was perpetrated. One group cannot carry out such attack; it must have been carried out by groups of bandits in the area,” Salihu said.

Police spokesman Sanusi Abubakar said that security operatives are present at the scene to conduct investigations.

For his part, Nigerian President Muhammadu Buhari, who has been accused of negligence in reining in violence in the country, said the bandits are “currently under desperate pressure because of the intense and sustained air and ground operations against them in their hideouts by our security forces,” in a statement by his spokesman, Garba Shehu.

“The cowardly attacks on innocent people by the bandits show a rearguard action of criminals under pressure,” Buhari said. “But they will have no place to hide and our gallant security forces will not relent in the current offensive to defeat these callous enemies of humanity.”