A mob of hundreds of Muslim men lynched a Sri Lankan factory manager in eastern Pakistan’s Sialkot district on Friday by beating him to death and then burning his body after a rumor emerged in Sialkot the man had allegedly committed “blasphemy” against Islam, Agence France-Presse (AFP) reported this weekend.

The incident took place in Sialkot, a district within Pakistan’s Punjab province, on the morning of December 3. Punjab police told AFP “rumors spread” on Friday that the manager of a local factory, Priyantha Diyawadana, had “torn down a religious poster and thrown it in the dustbin” in recent days.

A mob of Sialkot factory workers and other local residents gathered outside the factory managed by Diyawadana around 11:00 am local time on December 3 and located Diyawadana at his place of work. Gondal told the AP Diyawadana “was lynched inside the factory.” 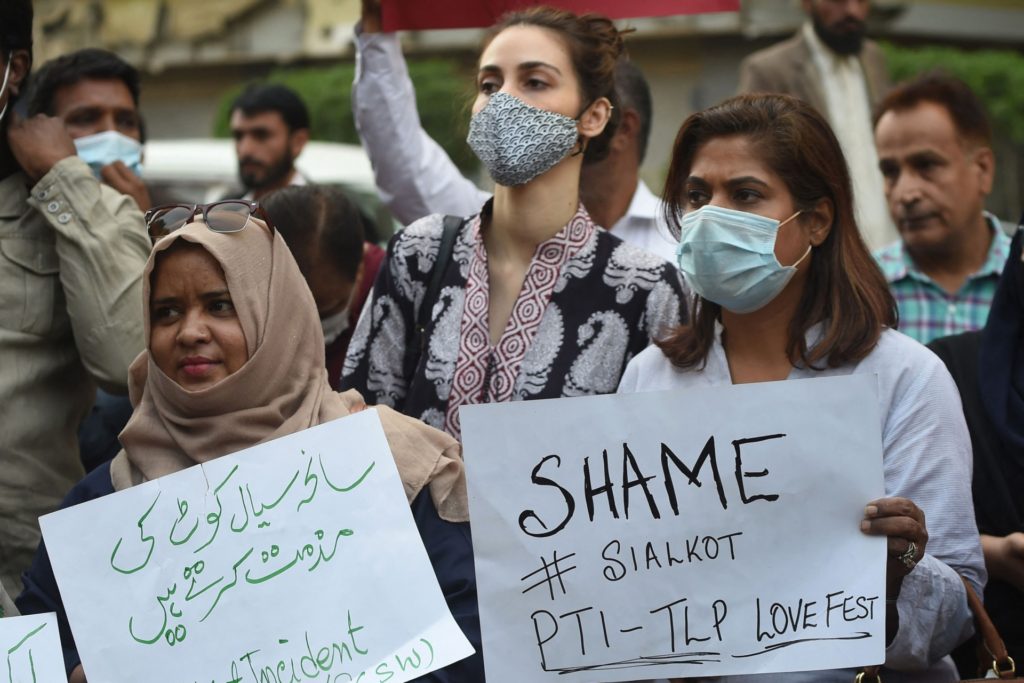 Members of Joint Action Committee carry placards during a protest in Karachi on December 4, 2021 against the killing of a Sri Lankan factory manager in Sialkot after he was beaten to death and set ablaze by a mob who accused him of blasphemy, officials said. (Photo by RIZWAN TABASSUM/AFP via Getty Images)

“Videos circulating on social media showed the mob dragging his heavily bruised body outside, where they burned it, surrounded by hundreds of others who cheered on the killers,” according to the AP.

Punjab government spokesman Hasaan Khawar told reporters on December 4 roughly “800 to 900 people — some of them armed with sticks — had dragged the body of the manager,” AFP relayed.

Sialkot District Police Officer Umar Saeed Malik said the man, identified as Priyantha Kumara, was a Sri Lankan national and was employed at the factoryhttps://t.co/aHD7OOEuJp

Khawar said local health officials had conducted a post-mortem examination of what remained of Diyawadana’s corpse, adding that the man’s remains “would be handed over to the Sri Lankan Embassy in Islamabad.”

Joint Action Committee and its coalescing alliances organised a protest rally in Lahore condemning religious militancy and its supporters and sialkot incident of lynching of a Sri Lankan by religious phenatics under a false blasphemy charge..we demand end to religious extremism pic.twitter.com/ovBMlZRl5R

In a preliminary statement issued December 3, Khan described Diyawadana as having been burned “alive” by the mob.

“The horrific vigilante attack on factory in Sialkot & the burning alive of Sri Lankan manager is a day of shame for Pakistan,” the prime minister wrote.

“I am overseeing the investigations & let there be no mistake all those responsible will be punished with full severity of the law,” he stated. “Arrests are in progress.”

In a statement posted December 4, Prime Minister Khan said Punjab police had arrested more than 100 people in connection with the killing.

Police collected videos of the torture from social media. They also claimed to have arrested over 145 suspects and transferred them to an unidentified locationhttps://t.co/mLfn8NCtVb

“I informed him 100+ ppl arrested & assured him they would be prosecuted with full severity of the law,” the head of state updated.

AFP noted on December 4 that “accusations of blasphemy” within Pakistan are “often be wielded to settle personal vendettas, with minorities largely the target,” implying that the blasphemy accusation against Diyawadana may have been false.

Tahir Ashrafi, a special representative of Pakistan Prime Minister Imran Khan on the subject of “religious harmony,” told AFP on Sunday Sialkot factory workers “had complained” of Diyawadana being a “very strict” manager.

“Police experts are investigating this case from various angles, including that some factory workers played a religious card to take revenge on the manager,” Ashrafi revealed.