Australia’s federal treasurer, Josh Frydenberg, confirmed in an interview on Monday that tennis star Novak Djokovic received a valid entry visa in early January, but claimed a “computer” was responsible for the error.

Australian Border Force deported Djokovic on Sunday Melbourne time after Immigration Minister Alex Hawke proclaimed him a public health threat for not having agreed to ingest a Chinese coronavirus vaccine product. Hawke expelled Djokovic after a federal court ruled his visa valid and Djokovic spent much of last week practicing to play in the Australian Open tennis tournament, which began on Monday.

Authorities had initially detained Djokovic upon his arrival on the grounds that the medical exemption he had received to play in the tournament was mysteriously invalid. Djokovic later admitted to giving the Australian government false information regarding previous travel on the plane to Melbourne, but Hawke did not mention that fact in the government’s order for Djokovic to leave.

Djokovic arrived in Belgrade, Serbia, on Monday. He is the reigning Australian Open champion and has won the tournament more than any other player. He also, for now, maintains his number-one ranking in the Association of Tennis Professionals (ATP).

Djokovic’s family – who held protests in Belgrade throughout the immigration saga – has maintained the tennis player did not invade Australia and would not have boarded a flight to the country if he had not received documentation guaranteeing his entry, like a valid visa. During an interview on Monday with David Koch of the Australian morning show Sunrise on 7, Frydenberg confirmed that Djokovic received a visa.

“As you know, we get a lot of visas, it’s a computer-generated process,” Frydenberg said. “It relies on the applicant putting in what they believe their conditions [are]. He said that he had a legitimate exemption, but that wasn’t the case.”

"How did he get on a plane?" – @Kochie_Online questions Treasurer @JoshFrydenberg over the Novak Djokovic debacle after the tennis star was deported from Australia. pic.twitter.com/pLeL5sFrbj

Koch repeatedly pressed Frydenberg to explain how Australian authorities permitted Djokovic to get on a flight to Melbourne in the first place, receiving little clarification before the “computer” answer.

“When you get a visa, he filled it in, he said that he had the exemption, and when he gets to the border, the veracity of that exemption that he claims that he had is tested,” Frydenberg had initially explained. “And it did not meet the ATAGI guidelines as to what somebody needs to do to get to Australia if they’re unvaccinated.”

ATAGI is the “Australian Technical Advisory Group on Immunization,” a bureaucratic entity that proscribes policy towards coronavirus vaccination. 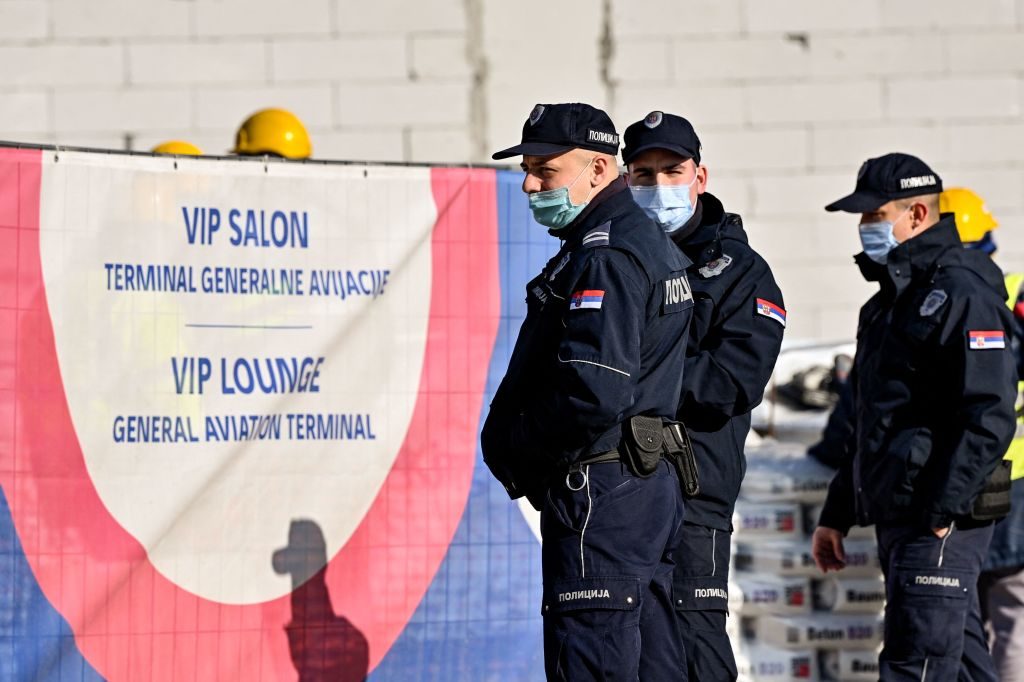 Serbian police stand outside the VIP exit of Belgrade’s international airport on January 17, 2022, ahead of Tennis world number one Novak Djokovic’s arrival after his deportation from Australia over his coronavirus vaccination status. (ANDREJ ISAKOVIC/AFP via Getty Images)

“Now, of course, they could go through a two-week quarantine,” Frydenberg noted. “He didn’t do that, and otherwise he didn’t have the required medical exemptions, so that’s why he wasn’t ultimately allowed to stay in Australia because the final decision was left to the immigration minister and he made that decision that it wasn’t in the public interest.”

Koch lamented the situation as “embarrassing” and appeared frustrated at the lack of clarity regarding who in the government told Djokovic he had a valid exemption, repeatedly asking, “how did he get on a plane?”

“Well, we have very clear rules,” Frydenberg offered, to which an exasperated Koch replied, “they’re not clear!”

Frydenberg at one point also appeared to take a bizarre swipe at Americans, asserting, “it doesn’t matter if you’re Novak Djokovic, the number one tennis player in the world, or you’re Betty from Utah – if you’re unvaccinated, the same rules apply.”

Frydenberg’s assertion that a “computer-generated process” granted Djokovic permission to enter the country followed repeated dodging from Australian officials regarding any clarity as to how Djokovic possessed a visa.

The deputy premier of Victoria, the state that hosts the Australian Open, simply replied “it’s a fair question” when asked who gave Djokovic the documentation that made his flight to Melbourne possible. 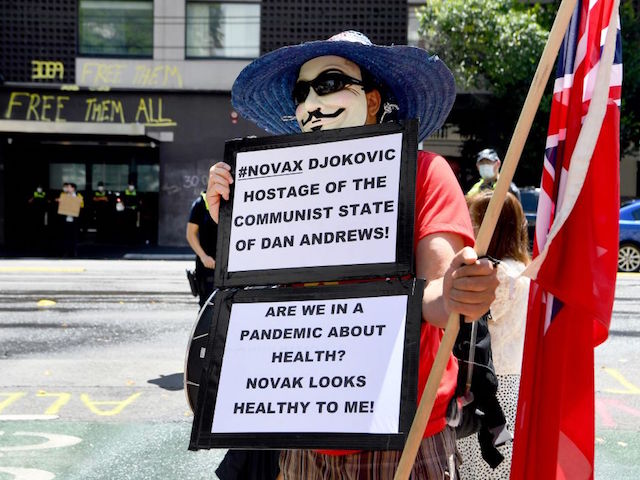 An anti-vax protester holds placards at a government detention centre where Serbia’s tennis champion Novak Djokovic is reported to be staying in Melbourne on January 7, 2022. (WILLIAM WEST/AFP via Getty Images)

That confusing followed a solid month of finger-pointing and confusion in December regarding whether Australia would allow Djokovic to play. At the time, Djokovic had not made public his vaccination status, though he had vocally supported allowing individuals to choose what medical products to put in their bodies – a controversial opinion in Australia.

The bickering between Tennis Australia officials and the government resulted in Prime Minister Scott Morrison weighing in, declaring, “decisions are being made by medical officials and other officials, not by politicians.”

The country’s immigration minister used his political power to deport Djokovic this week after a federal court ruled he was legally allowed to remain in the country. The government offered no medical argument to expel the tennis player.

“We invited him over here, we told him he had a medical exemption, we gave him a visa, then when he gets here … we strongarm him at the airport,” attorney Justin Quill, who also appeared on Sunrise at 7 on Monday, lamented, concluding, “we have mucked it up badly.”

"We invited him over here, we told him he had a medical exemption, we gave him a visa"

“We made him the poster boy for anti-vaccination sentiment and now we’ve made him a martyr,” Quill asserted, noting that Djokovic had not made public his vaccination status before the Australian government forced him to do so.

Quill also explained that a likely reason that the Australian government argued that Djokovic should not be allowed to stay on the opinion that his presence inflames anti-vaccination sentiment was likely a tactical decision, as only finding of legal error can overturn the immigration minister’s orders, and finding legal error in an opinion is extremely difficult.