The “makeshift” facilities, as the Communist Party refers to them, are meant to contain individuals who test positive for Chinese coronavirus but do not require critical medical care. China does not allow individuals with mild or asymptomatic coronavirus cases to handle their illness at home, necessitating the use of massive confinement spaces.

The emergency construction of new facilities to treat coronavirus patients is at odds with the repeated assurances in Chinese state media that the current outbreak largely consists of mild and asymptomatic cases and that Beijing has the disease entirely under control.

The Chinese coronavirus pandemic began in Wuhan, central China, in late 2019. The Communist Party declared victory against the virus in March 2020, just as the rest of the world began tallying up millions of cases of the disease and facing extreme strain to its healthcare systems.

The outbreak in Wuhan became a pandemic because of the Chinese Communist Party’s poor handling of the situation, including letting 5 million people leave the city and hosting a family-style banquet for 130,000 residents indoors at the peak of the outbreak there. 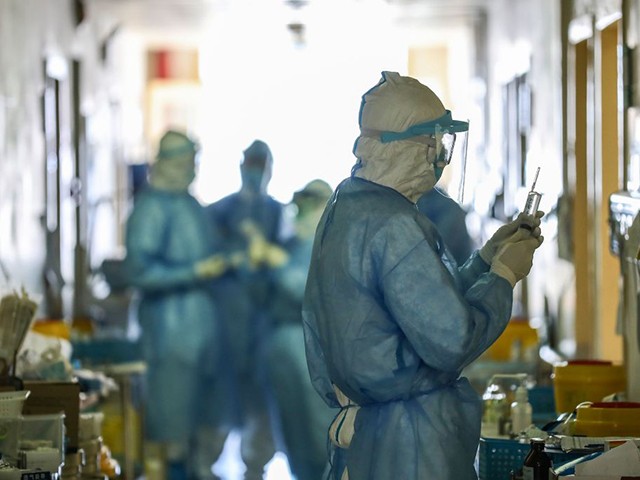 This photo taken on February 16, 2020 shows medical staff members working at the isolation ward of the Wuhan Red Cross Hospital in Wuhan in China’s central Hubei province. (STR/AFP via Getty)

Despite essentially announcing it had contained the virus two years ago, China has faced a near-ceaseless barrage of outbreaks prompting lockdowns throughout much of 2021 and early this year in some of its largest cities.

Communist Party authorities locked down much of Jilin in response to the latest outbreak, which has suddenly made headlines in corporate media outlets in the West greater than those made by the late 2021 lockdown of Xi’an, a city whose metro area is larger than New York City, and the coronavirus outbreak centered in Beijing during the 2022 Winter Olympics. China’s Global Times government newspaper applauded Jilin Communist Party officials on Wednesday for allegedly ordering the construction of more makeshift hospitals and quarantine facilities to intern citizens who test positive with the disease.

“Northeast China’s Jilin Province has built eight makeshift hospitals and two quarantine centers to cope with the surge of [Chinese coronavirus] cases,” the Global Times claimed. A top medical official explained to the newspaper that “patients with severe symptoms will be sent to designated hospitals, while those who are asymptomatic or have mild symptoms will be sent to makeshift hospitals.”

The Global Times claimed that Jilin would soon crush its coronavirus outbreak despite the rapid constructions signaling significant concern among local officials.

“A Beijing-based immunologist who requested anonymity told the Global Times that prospects are promising to cut off community transmission in Jilin Province soon if a more decisive and strict policy is adopted,” the newspaper claimed, “noting that the main challenge for the province is how to mobilize and coordinate all resources in the anti-epidemic work.”

Jing Junhai, Party chief of Jilin, is nonetheless quoted in the story as saying that every citizen of the province is in a “race against time” and the situation was so dire that it required the region to “concentrate all resources so as to control the spike as soon as possible.”

Chinese state media outlets published photos of the allegedly new hospital facilities in Jilin and published a “live cam” of the construction.

Eight makeshift #hospitals with more than 11,000 beds have been built in #Jilin Province to thwart the outbreak of #COVID19. pic.twitter.com/QaVH7cTI3W

The propaganda images recall those the Communist Party published from Wuhan at the height of the pandemic there in early 2020, showing an alleged “hospital” that officials claimed was built in ten days.

China claimed in April 2020 that its makeshift hospitals in Wuhan were no longer needed.

Chinese officials have confirmed coronavirus outbreaks in 28 provinces throughout the country, including regions as far from Jilin – where one of the most severe outbreaks is currently being documented – as Shenzhen, a technology and manufacturing hub on the country’s southern border with Hong Kong. Chinese officials have insisted that “mild” and “asymptomatic” cases are driving the high diagnosis numbers.

“Wu Zunyou, chief epidemiologist with the Chinese Center for Disease Control and Prevention, revealed that imported infections, transmission of the Omicron variant and a high proportion of asymptomatic and mild cases are three major causes to the expanded clustered outbreak across the country,” the Global Times reported on Tuesday.

Wu insisted, the propaganda outlet reported, that the fact that cases were not causing significant health damage did not negate the need for “the dynamic zero-COVID policy,” China’s euphemism for its extreme lockdown methods.

The Global Times proclaimed in an article on Wednesday that the outbreak of mild cases called for China to “even more firmly adhere to … the general policy of dynamic zero-COVID.”

Wu’s description of a high number of mild and asymptomatic cases appeared to contradict the bleak update on Tuesday from China’s National Health Commission (NHC), which described the country’s situation as “grim.”

“[T]he current epidemic situation is grim and complex, making it difficult to prevent and control,” deputy head of the NHC Lei Zhenglng said at a press conference.

Chinese dictator Xi Jinping has yet to comment on the Chinese coronavirus crisis in his country at press time. He is scheduled to discuss the Russia-Ukraine war with President Joe Biden on Friday.