Beijing announced on Tuesday that it had detected 629 infections of the Chinese coronavirus in Tibet since the Chinese autonomous region’s latest epidemic of the disease began in recent days, prompting China’s ruling Communist Party to lock down Tibet’s prefecture-level city of Shigatse last week.

China’s central government administers Tibet and officially refers to it as the Tibet Autonomous Region or “Xizang,” a Mandarin name for the region. China Daily, which is owned by the Chinese Communist Party’s publicity department, reported on August 10 that “[a]ll counties and districts in the city [of Shigatse] were placed under strict control for three days on Monday [August 8], and people were not allowed to enter or exit, unless necessary.”

Shigatse health officials detected 13 new, locally transmitted cases of the Chinese coronavirus on August 10, though just two of the cases were designated as “symptomatic.”

“[A] 2-year-old child and a 56-year-old man” comprised Shigatse’s symptomatic cases of the disease that day, according to a statement issued by the city’s epidemic prevention and control authority. Municipal health officials forcibly transferred the two patients to public hospitals for treatment of their symptoms and forcibly quarantined an unspecified number of their “close and secondary close contacts,” according to the statement. 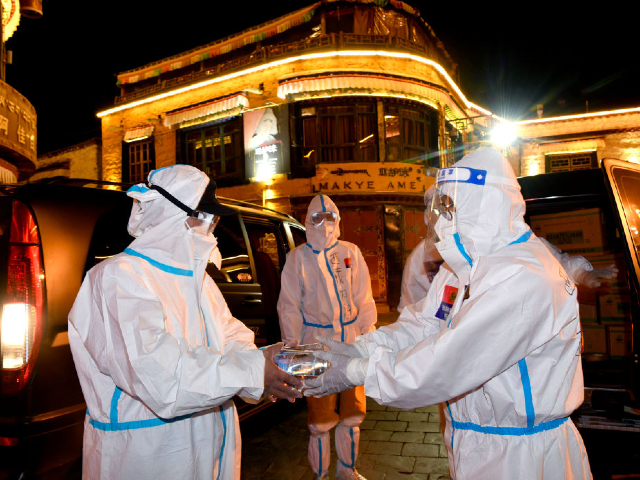 LHASA, CHINA – AUGUST 14: A volunteer gives out anti-epidemic supplies to an epidemic prevention worker on August 14, 2022 in Lhasa, Tibet Autonomous Region of China. Lhasa will extend disinfection work in its main urban areas until 3 a.m. on Thursday. (Photo by Li Lin/China News Service via Getty Images)

Shigatse recently designated 12 high-risk areas distributed throughout Gyirong, Drongba and Nyanang counties and Samdrubtse district. It added four new medium-risk areas in five counties, including Gamba, Nyanang, Dingri, Gyirong and Drongba. The rest of the city has been designated as low risk. […]

All indoor cultural, sports and entertainment venues, such as bars, cinemas and libraries, have closed. The city has also halted activities including mass gatherings, celebrations, forums, training sessions, religious activities and the operation of kindergartens and nursing homes during the three-day period.

To assist Tibet’s fight against the epidemic, a medical team from Shandong province arrived in Lhasa, the regional capital, on Tuesday afternoon. The team will work on epidemic prevention and treatment next, Tibet Daily reported. 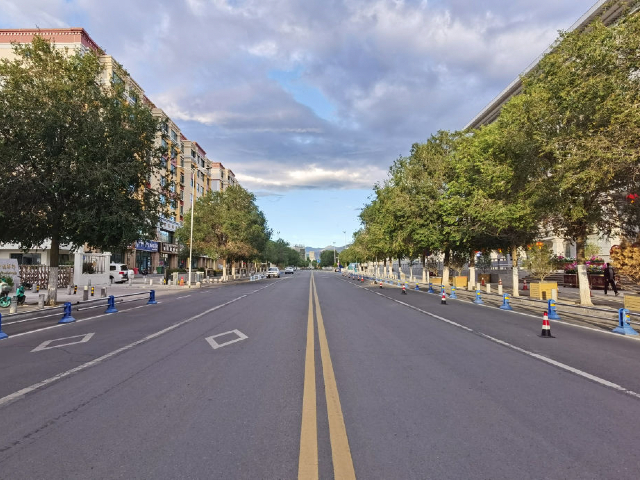 Chinese government workers may have sprayed disinfectant solution on sections of Shigatse around August 14, according to unverified video footage circulating online that appears to show the alleged process.

More anti-Covid street-spraying from Tibet, this time in Shigatse, captioned “Let’s tide over difficulties together, wait for the flowers to bloom & the epidemic to disperse.” (The music is from the 1960 Hollywood epic Exodus, about the founding of the state of Israel). pic.twitter.com/QVIusHo5CQ

Screenshots of alleged public notices circulated on Twitter on August 14 indicating that Chinese government workers also sprayed disinfectant in the Tibetan capital of Lhasa, which is located 170 miles northeast of Shigatse, around August 16. Breitbart News could not independently verify the authenticity of the alleged video footage nor of the alleged screenshots at press time on Monday.

Anti-Covid disinfection – spraying by trucks & teams – is to continue in Lhasa, Tibet Radio & TV has announced. "Disinfection in Lhasa has been extended for 3 days… No going out, no visiting, no gathering." People can leave Lhasa "if they have a negative test within 48hrs." pic.twitter.com/9DnTK7gLE1

The disinfecting campaigns in Tibet are the latest in a series of similar policies that began in Wuhan in 2020. At the time, given the little information available about the Chinese coronavirus, it remains unclear to scientists exactly how contagious the pathogen was when encountered on surfaces. Currently, however, the World Health Organization (W.H.O.) does not recommend mass sprayings of streets to prevent the spread of coronavirus.

“In outdoor spaces, large-scale spraying or fumigation in areas such as streets or open market places for the COVID-19 virus or other pathogens is not recommended,” the W.H.O.’s website currently reads. “Streets and sidewalks are not considered as routes of infection for COVID-19. Spraying disinfectants, even outdoors, can be noxious for people’s health and cause eye, respiratory or skin irritation or damage.”