Multiple nations that maintain diplomatic ties with the nation of Taiwan – which precludes them from establishing a relationship with communist China, as per Beijing’s protocol – have used the United Nations General Assembly this week to demand the U.N. include Taiwan as a full member.

In reality, Taiwan is a sovereign state with its own government apparatus, military, infrastructure, and democratic society. No government based in Beijing has governed Taiwan in its history.

Only 14 countries in the world recognize Taiwan’s sovereignty and maintain diplomatic relations with Taipei. The United States does not. Washington adheres to something it calls the “One China policy,” which states that Taiwan is not a country, but does not explicitly recognize that Taiwan is a province of China, allowing the United States to engage with Taipei through arms sales and other trade.

Taiwan was once a member of the United Nations but was expelled over 50 years ago at Beijing’s behest. Washington has since endorsed allowing Taiwan to participate at the U.N. even as it fails to recognize the country’s sovereignty. 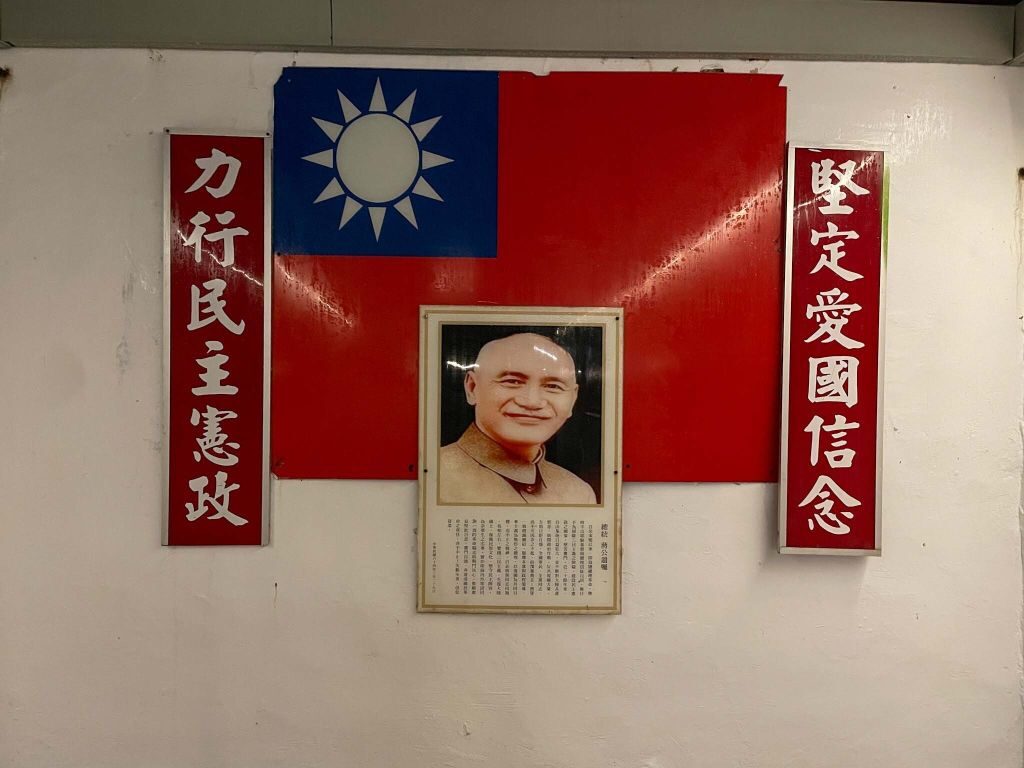 Portrait of Chiang Kai-shek, Former President of the Republic of China, Taiwan, under the Taiwanese flag on display in a military tunnel transformed into a museum in Nangan, Matsu archipelago, Taiwan, August 30, 2022. (Walid Berrazeg/Anadolu Agency via Getty Images)

Countries that do acknowledge Taiwan is a country used their platforms this week at the ongoing General Assembly to advocate for Taipei’s participation in the global forum.

On Tuesday, a day featuring a large number of Latin American states, the presidents of Paraguay and Guatemala made their cases in defense of Taiwan.

“The difficult crossroads we are currently facing demand addressing global problems jointly, without exclusive. Given this, my country emphatically reiterates its support for the request by the Republic of China (Taiwan) to be a full member of the United Nations system,” Paraguayan President Mario Abdo asserted. “We are convinced of the valuable contributions that its participation would bring to the multilateral system.”

Guatemalan President Alejandro Giammattei similarly urged the United Nations to reconsider its exclusion of a free, democratic government such as Taiwan’s.

“Guatemala is ready to collaborate with an open spirit with the efforts for the transformation of this organ … so that they include within their reforms the right of Taiwan to belong to this organization and be recognized as a nation,” Giammattei offered in his speech, “because this has been denied by one of the Security Council’s permanent members [communist China].”

Also on Tuesday, another Taiwanese ally, President David Kabua of the Marshall Islands, condemned China for its ongoing military harassment of Taiwan and urged the United Nations to “welcome Taiwan and its people into our global family.”

“How long will the U.N. persist in closing its doors and thereby denying access to the people of Taiwan?” Kabua asked. “Taiwan is a vibrant democracy and responsible and contributing member of our global family, and the United Nations circle of unity is incomplete without Taiwan and its people.”

“Now, that the world is facing escalated tension in and around our islands region, we as the world cannot be silent. With the ability for meaningful participation in the UN system, and to make greater contributions, Taiwan can better join all of us to make a collective difference,” the president asserted. “The UN system should revert to its original policy of consideration of widely-accepted passports for basic public access to the UN itself, and make good on its goal of broader participation, including registration procedures for civil society access.”

On Wednesday, King Mswati III of Eswatini, Taiwan’s only African ally, noted that China’s insistence on pressuring the United Nations into excluding Taiwan resulted in Taipei failing to have access to the World Health Organization (W.H.O.)’s knowledge and resources – and vice versa. 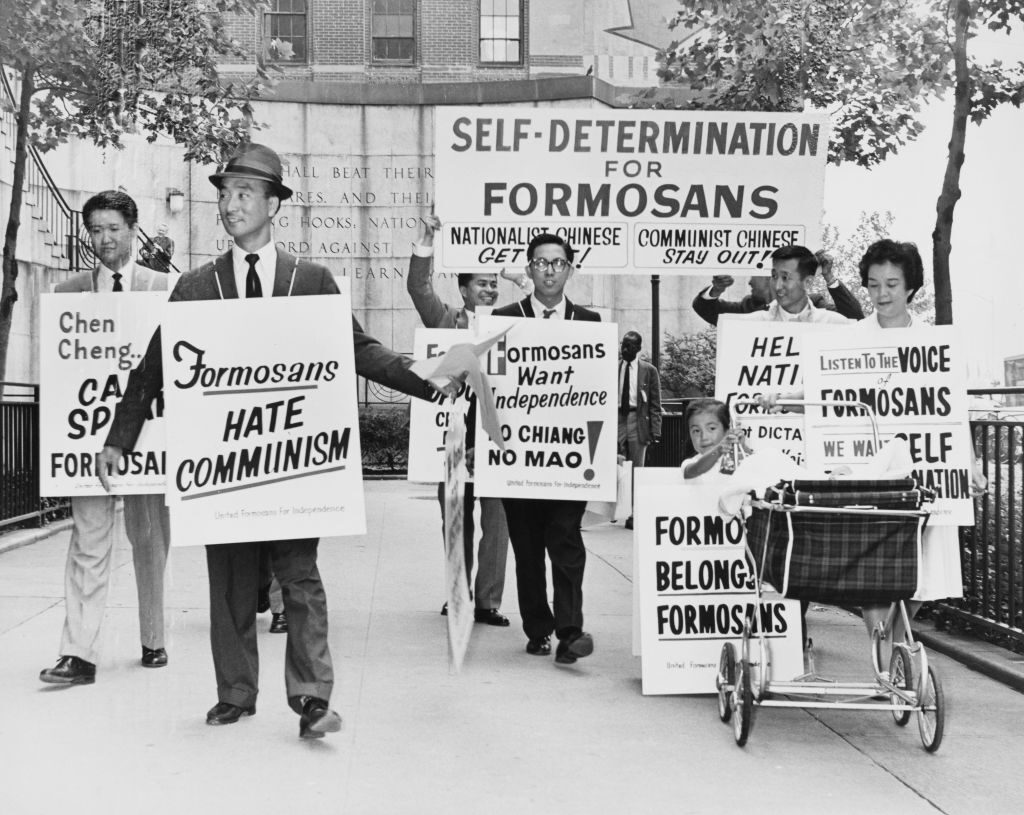 Taiwanese demonstrators carrying anti-Communist and pro-independence placards during a demonstration near the United Nations building in New York City, New York, circa 1955. Visible in the background is part of the Bible verse inscription, taken from Isaiah 2:4, on a wall at United Nations Plaza which is across the street from the organization. (Keystone/Hulton Archive/Getty Images)

“When the world faced the [Chinese coronavirus] pandemic, it must be noted that no country was spared, which means we all needed to come together to find solutions. Unfortunately, Taiwan was unable to access some of the World Health Organization’s (W.H.O.) programmes and thus implement the remedies that required their approval,” the king noted. “We continue to appeal for Taiwan to be considered for full participation in the un agencies. We are confident that the global village would benefit substantially from Taiwan’s meaningful participation in the U.N. system.”

“The Kingdom of Eswatini calls upon the United Nations to make the necessary arrangements for Taiwan to significantly participate in relevant unspecialized agencies and mechanisms,” he concluded.

Taiwan was the first nation to alert the W.H.O. to the spread of a novel contagious disease in Wuhan, China, in December 2019. The Taiwanese government sent an email to W.H.O. officials, despite not being allowed into the organization, stating that its intelligence arms had observed evidence of the spread of a respiratory disease in the origin city of the Chinese coronavirus. As Taiwan’s representative office in the United States told Breitbart News in 2020, the W.H.O. “mostly ignored” that warning and, nearly a month later, was still issuing statements claiming the Chinese coronavirus was not transmissible from person to person.

Similarly, the foreign minister of Palau, Gustav Aitaro, demanded a place for Taiwan at the United Nations, noting that most countries accept Taiwanese passports even while not officially accepting Taiwan’s statehood.

Watch #Palau🇵🇼 Minister of State Gustav Aitaro invoke @UN's🇺🇳 founding principles as he speaks up for #Taiwan🇹🇼. All nations, Taiwan included, deserve an equal say in the political arena, as enshrined in the UN Charter. We thank our wise & loyal #IndoPacific ally for the support! pic.twitter.com/OFyWV1Dyz3

“I reiterate in the strongest terms that this body can demonstrate leadership through accepting Taiwan into the U.N. system as a valuable contributor to our collective efforts at promoting peace and collaborating on international matters,” Aitaro said. “Just most U.N. member states accept Taiwan passports, so too should the U.N. system recognize and incorporate the Taiwanese people and enrich this body with the benefits of their participation.”

“The Taiwanese people are part of the global community and a valuable partner in combating climate change and the [Chinese coronavirus] pandemic,” the top diplomat affirmed. “With the many challenges facing our planet and people, we need every person – including the 23 million people of Taiwan – to be part of the solutions.”