CARACAS — The Biden administration, through the Department of the Treasury’s Office of Foreign Assets Control (OFAC), issued a license to California-based Chevron on Saturday that allows the company to produce and export oil from Venezuela.

OFAC specifically states that Chevron is allowed to engage in the “sale to, exportation to, or importation into the United States of petroleum or petroleum products produced by the Chevron JVs,” meaning Chevron’s joint ventures in Venezuela.

The renewable license, initially valid for a period of six months and revocable at any time, prohibits any kind of taxes or royalty payments from Chevron to the Maduro regime. It also prohibits the payment of dividends of any kind to Venezuela’s state-oil company Petroleos de Venezuela (PDVSA) or any entity in which PDVSA has a majority stake.

The license also bans Chevron from engaging “in any transaction or dealing in or related to goods or services of Iranian origin” as well as any transaction involving entities in Venezuela owned or controlled by Russia. In the case of Iran, the Islamic nation has provided continuous aid to the Maduro regime in the repairing of Venezuela’s rundown oil refineries after years of socialist management brought them to the brink of complete ruin Iran has begun to refine upwards of 100,000 barrels of its own oil per day in Venezuela’s El Palito refinery, located in Carabobo State.

The move provides sanctions relief to Nicolás Maduro’s socialist regime while once again permitting the placement of Venezuelan oil in U.S. markets after the Biden administration failed to convince Saudi Arabia to increase its production and urge other OPEC+ member nations to do the same. Following a visit by leftist President Joe Biden to Saudi Arabia in July and reported private requests to increase oil production, OPEC+ announced a dramatic, 2-million-barrel-a-day production cut in October. Saudi Energy Minister Prince Abdulaziz bin Salman suggested more production cuts may occur in the future in remarks last week. 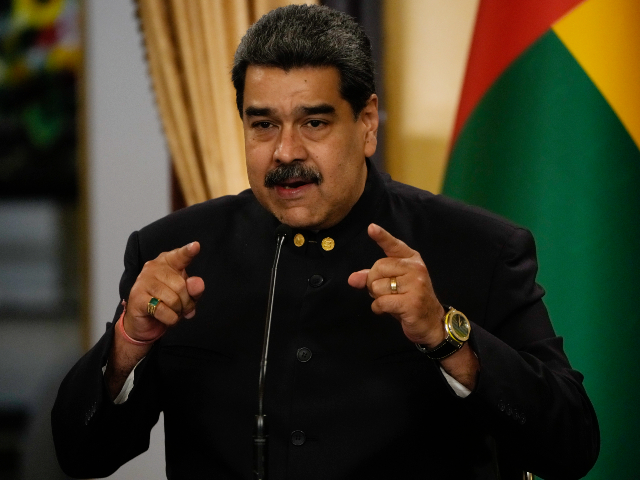 As confirmed by the White House in October, the Biden administration had attempted to convince Saudi Arabia to postpone any OPEC+ production cut until after the November midterm elections. A report in the left-wing New York Times last month suggested that Saudi Crown Prince Mohammed bin Salman had “duped” Biden into thinking Riyadh would increase its production, but that never came to pass.

During the administration of former President Donald Trump, the United States imposed strict oil sanctions on Venezuela, prohibiting the purchase of Venezuelan oil by United States companies in 2019.

Chevron received the license undoing those sanctions this week, known as Venezuela General License (GL) 41, hours after representatives of the Maduro regime and Venezuela’s “opposition” Unitary Platform resumed negotiations over the weekend on several topics, including sanctions relief for the rogue socialist regime and preparations towards holding “free and fair” presidential elections in 2024.

For the past two decades Venezuela’s socialist regime and Venezuela’s “opposition” — which has taken on different names through time but has largely consisted of self-identified socialists, as well — have engaged in unpopular negotiations with one another that have yielded no fruitful results towards ending Venezuela’s ongoing political crisis, let alone putting an end to the socialist rule in the South American nation.

The latest attempt at negotiations took place in 2021, ending when representatives of Maduro abruptly left in October of that year, in protest over the extradition of Alex Saab. Saab, a key ally of the Maduro regime, has been described as the socialist dictator’s “financial brain” and is currently detained in the United States facing trial on money laundering charges. The Maduro regime claims that Saab is a diplomat of the regime, often portraying him as a heroic figure against U.S. sanctions.

Reports of an upcoming license to Chevron and its sanction-relief effects on Venezuelan oil had surfaced in October, one month before it was issued, and followed continued negotiations between the Biden administration and the Maduro regime that began in March.

In a press release on Saturday, the U.S. Department of Treasury said, “this action reflects longstanding U.S. policy to provide targeted sanctions relief based on concrete steps that alleviate the suffering of the Venezuelan people and support the restoration of democracy.” U.S. Secretary of State Anthony Blinken stated that the negotiations between the Maduro regime and “opposition” are “an important step toward restoring democracy for Venezuelans.”

In contrast, members of the “opposition”-led National Assembly, elected in 2015 and ousted via a sham election in 2020, have expressed concern that Maduro will use the negotiations as a means to perpetuate himself in power.

“On this occasion, the dialogue process cannot become a new stratagem of the Nicolás Maduro regime to remain in power, avoid sanctions and criminal liability for human rights violations and crimes against humanity,” the “opposition”-led National Assembly said in a statement.

Molly de la Sotta, president of the Non-Goverment Organization Relatives of Military Political Prisoners in Venezuela (FPPMVE), said on Saturday that the victims of the Maduro regime are not being heard during the negotiation process.

“The Unitary Platform [Venezuelan ‘opposition’] has not even met with the families of the political prisoners of the regime, which are more than 300,” de la Sotta said. “The international community supporting this dialogue has tossed the victims aside. The freedom of political prisoners and the closure of the Torture Centers maintained by the Maduro regime must be demanded.”

The oil sanctions relief is the latest in a series of concessions granted by the Biden administration to Maduro and his family during the course of 2022. Prior to the latest announcement, the White House had removed sanctions on Maduro’s nephew and former treasurer Carlos Erik Malpica Flores and released the convicted “narco-nephews,” Maduro’s drug trafficking nephews who had been caught by DEA officials in 2015 attempting to move 800 kilograms of cocaine into the United States.

The Maduro regime has not publicly commented on Chevron’s license at press time. It has, however, demanded the United States drop the narco-terrorism and drug trafficking indictments and bounties imposed upon Nicolás Maduro and members of his socialist regime.