A report released by Peking University this week found that China is at least five years behind its ostensible goal of reaching “peak carbon emissions” by 2030. In other words, it will be at least 2035 before China’s emissions stop increasing.

This should not come as surprising news to anyone watching China litter the Third World with carbon-spewing power plants, import record amounts of coal, open new domestic coal mines that will take years to reach profitable operation, and build expensive new railroads to haul all that coal across the country.

China agreed to reach peak emissions by 2030 as part of its commitment to the Paris Climate Accords. The climate change movement has occasionally fantasized about China achieving its peak and declining many years ahead of schedule when, in reality, Beijing keeps increasing its emissions and burning ever-greater quantities of coal.

According to the South China Morning Post (SCMP) on Monday, the Chinese Communist Party has no intention of giving up on petrochemicals any time soon, either:

Petrochemicals are used in millions of everyday products, from plastics, detergents, rubbers and fertilizers, to packaging, clothing and insulating materials.

The sector is a key economic pillar and accounts for about 4 per cent of China’s total carbon dioxide emissions. Moreover, unlike other high energy-consuming sectors such as steel and cement where emissions are expected to fall in the coming years, those for petrochemicals are likely to increase over the next two decades due to rising demand.

The sector, therefore, plays a key role in China’s energy transition drive. However, while China’s goal is peak carbon by 2030, current emission trends as well as related policy indicate petrochemicals will achieve this only in 2035, according to a report by the Institute of Energy at Peking University.

The Peking University researchers wistfully suggested China could reach “peak carbon” five years ahead of the original 2030 schedule if it really wanted. 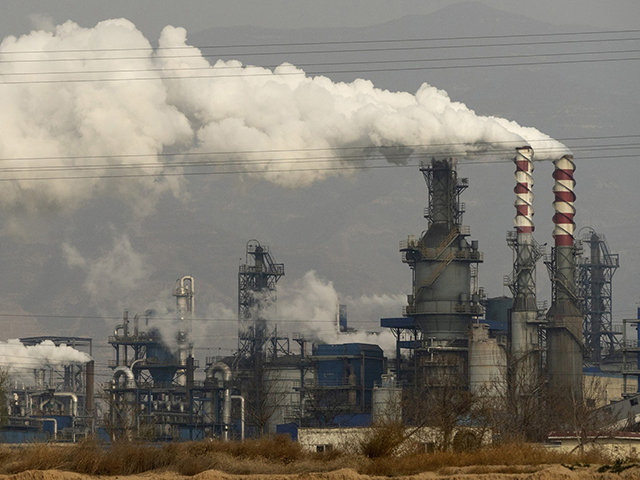 “A decarbonization push for petrochemicals would be based on industrial restructuring, energy conservation, increased electrification, as well as green hydrogen and carbon capture, utilization and storage,” the university paper said.

The only somewhat positive note in the report is that China’s energy demand and skyrocketing plastics consumption have been slowed by endless coronavirus lockdowns, a trend that could theoretically bring “peak carbon” closer to the original timetable if it continues. The massive anti-lockdown riots currently gripping Chinese cities suggest the trend might not continue much longer, however.

Another study published last week by the Center for Research on Energy and Clean Air (CREA) in Helsinki also found China’s industrial policies are “not fully aligned” with its peak emissions timetable.

The CREA study also noted reduced energy demand due to coronavirus lockdowns and looked past the mountains of coal China has been harvesting to suggest Beijing might take the opportunity presented by artificially suppressed demand to transition to green energy.

Reuters confusingly reported the CREA study by claiming, “China is expected to meet its own 2030 peak emissions target with relative ease,” but then admitting “the overall volume could still rise significantly over the decade as Beijing builds new coal plants and other carbon-intensive infrastructure to address concerns about energy security and economic stability.”

China will not be meeting peak emissions targets, with relative ease or otherwise, if emissions are still increasing at the end of this decade. Despite all of China’s broken promises, climate activists continue to believe the authoritarian government can snap its fingers and go “carbon-neutral” at the drop of a hat, no matter how worrisome today’s trends might be.