President Obama’s Department of Labor just ended disclosure of the lavish perks enjoyed by his Big Labor Boss supporters. But this should come as little surprise as Obama’s Labor Secretary Hilda Solis in a recent speech to the AFL-CIO tacitly acknowledged that she has turned the U.S. Labor Department over to them. 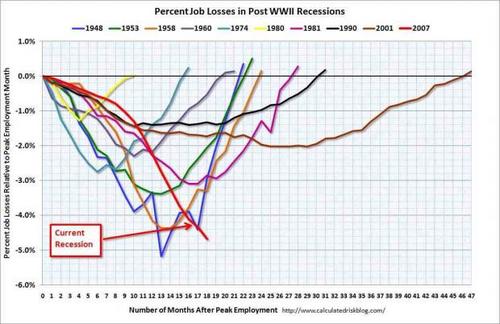 The Obama Labor Department has been positioning themselves to rollback recent changes to the congressionally mandated union financial disclosure reports for unions with receipts of $250,000 plus.

And now they have announced that they are eliminating disclosure designed to protect millions of workers who are forced to pay dues as a condition of employment. The specific disclosures being rescinded, among other things, exposed labor boss perks like John Sweeney’s alleged million dollar payment in 2000. Now, Big Labor Union Bosses who receive special payments can continue to hide these payments from workers who are forced to subsidize them.

According to the Bureau of National Affairs, Inc. (BNA), the Obama Administration’s so-called “reasoning” for rescinding the rule is that it imposes a burden on recalcitrant union officers who have failed to file union disclosure reports. BNA’s headline, “DOL Rescinds LM-2/LM-3 Rule, Citing Burden On Small Unions and Need for More Review” captures the spin.

The Department completely ignored the federal privilege which grants union officials the power to have workers fired for failure to pay union dues as a condition of getting and keeping a job. That’s the real burden, being forced to pay for union bosses’ perks and not even having the opportunity to see where your money goes.

Here is the Labor Department’s rescission argument in a nutshell: a few unions may be burdened by enforcing this rule’s consequences on unions that fail to follow reporting rules. Big Labor apologists at the Labor Department are not telling you that only unions that continuously neglect filing financial reports will be required to file more detailed reports. If unions file reports on time (a requirement since 1960), then there will likely be zero new burden – making the Department’s excuse a complete red herring. Only non-compliant unions will be forced to deal with the so-called burden, an outcome that is the result of its own irresponsible behavior.

In 2005, there were 1,275 labor unions that were over a year late in filing financial reports. Part of the rule being rescinded by Secretary Solis was an effort to reduce this problem.

It is pure politics to rescind a disclosure rule designed to protect workers from irresponsible union bosses when only bad actors would have been required to provide more disclosure. Shouldn’t union bosses who fail to file simple disclosures be required to provide more information? Why would the Labor Department not want to bring these bad actors into compliance? Solis provides no reasons.

The Department chose to kill the entire rule because of this red herring, and now forced-dues funded perks enjoyed by many Big Labor Bosses will be obscured. Hardly an example of a more transparent government that President Obama has promised; rather it is insider Washington as usual.

In fact, The National Right To Work Legal Defense Foundation’s believes that that the repeal of this rule exceeds the Secretary’s authority. The Foundation states that the authority granted in the Labor-Management Disclosure Act only permits the Secretary to make rules that aid in the prevention of the evasion of Act; and clearly allowing less disclosure cannot aid in the prevention of evasion of disclosure.

The next union disclosure target will likely be the remaining LM-2 report that has exposed hundreds of thousands dollars of forced teacher union dues going to ACORN and millions more going to other radical organizations. Prior to 2005, these kinds of details were unseen. If Obama’s Big Labor Department continues to focus on protecting union bosses rather than workers, then the meaningful information about union officials use of forced dues will be obscured in the Department’s darkening windows of disclosure.

This is just the first of several Labor Department planned steps to repeal and rewrite important regulations designed to protect individual workers rather than union bosses. If the Department’s handling of this rescission is any example, then more abuses of the regulatory process lay ahead.