Verizon Communications has become the first of what many expect to be many, to sue the Federal Communications Commission (FCC) to undo its voting themselves Internet Overlords on December 21st. 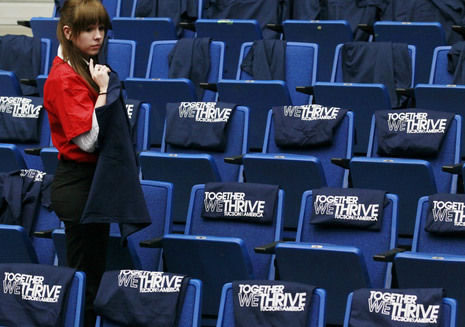 This is an FCC self-inflicted wound; they flung wide open the door to lawsuits aplenty with their dictatorial vote – and the sloppy, self-contradicting and unauthorized order on which they voted.

The FCC decided to again usurp authority over the Internet – so as to then impose Network Neutrality – in a manner similar to the one it attempted in 2007 with the Comcast-BitTorrent situation.

A manner which the D.C. Circuit Court last April unanimously said the FCC is not statutorily authorized to execute.

A manner which FCC Chairman Julius Genachowski himself – just two months before calling for the vote and casting an “Aye” – readily acknowledges he and the FCC don’t have the juice to execute.

For their outrageously outsized part – completely unqualified “Public Interest” Group (PIG) Free Press was cited in the FCC order a ridiculous 53 times – the Media Marxists were livid with the order, somehow asserting that the FCC didn’t go nearly far enough outside its clearly demarcated legal bounds.

Leftists, after all, never allow facts to get in the way of a good beating.

And these PIGish Media Marxists were caught utterly unawares by Verizon’s lawsuit, which (as an admitted non-attorney) I find to be some of the best lawyering we’re likely to see for quite some time.

In layman’s terms, Verizon claims in their suit that the FCC order alters wireless licenses (which it certainly appears to do). A clause in the 1996 Telecommunications Act stipulates that if the FCC alters someone’s wireless license and that someone sues, they are guaranteed an expedited hearing in – the D.C. Circuit.

The venue which, as we just mentioned, unanimously dismissed the last FCC attempt to power grab Internet and Net Neutrality-imposition authority.

The completely unqualified PIGish Media Marxists were dumbfounded (shocking, I know). They were most likely under the assumption that no one would sue until the FCC finally filed their order in the federal registry – which it – as of this writing – still has not yet done.

Verizon’s brilliant legal wrinkle needed to be executed within thirty days of the order’s passage – or else they would have lost the ability to file the claim. (Exactly how the pertinent 1996 Act clauses will be interpreted and applied is unclear – so Verizon rightly erred on the side of calendar caution.)

The woefully unprepared PIGish Media Marxists responded in two ways – neither of which made any sense whatsoever.

Verizon is schizophrenic because they are suing to undo their own Verizon-Google Waxman legislation deal.

But Verizon objects to the FCC’s process – its product is obnoxious, but irrelevant. It is (rightly) asserting that the FCC didn’t have the authority to do anything – and are citing particulars of the unlawful order only as a way to tether it to the 1996 Act and thusly see that the order is vacated.

To what they agreed in their deal with Google was what became Congressman Waxman’s legislation. They were seeking the rightful path to any sort of FCC rules change – via laws passed by the People’s Congress.

The FCC acted unilaterally – without benefit of and in the face of opposition from Congress. Thus, Verizon sues.

The aforementioned lame misunderstanding of a fundamental and fundamentally simple aspect of this story was actually asserted by – an alleged journalist, the Washington Post’s Rob Pegoraro.

In our Leftist-Captive Media world, the Tech Sphere press is a particularly pernicious wing – often openly serving as a Media Marxist open channel. Pegoraro’s senseless contention demonstrates he either doesn’t comprehend what he’s covering – or does and intentionally misreports it. Either way, he shouldn’t be on the beat.

Verizon is just “forum shopping” – trying to get their case heard specifically and solely in the D.C. Circuit.

This is fallacious in multiple directions.

“Forum shopping” refers to lawyers looking to place their cases in the most favorable courtroom – the one most likely to deliver them their desired decision.

Verizon is not doing this. They are in fact doing nothing more than adhering to the 1996 Act – which calls for an expedited hearing specifically in the D.C. Circuit.

I know why the PIGish Media Marxists find this confusing – Verizon actually obeying the relevant law is throwing them.

But look who is “forum shopping.” Why, it’s the FCC.

In an unusual step last week, the Federal Communications Commission released public guidance in an effort to encourage “forum shopping” for lawsuits challenging the FCC’s order to regulate the Internet….

The FCC’s “Public Notice” provides a virtual road map for groups that might want to file suit over the so-called “Net Neutrality” order that the regulatory body approved in late December. The FCC doesn’t even hide the fact that it is encouraging groups to jump-start the “judicial lottery procedure,” which would ensure that the FCC has a shot at a more friendly venue to hear its defense for regulating the Internet.

For example, if three different entities or individuals file three separate lawsuits in three different federal court districts involving the same issue, in this case the FCC net neutrality order, the cases are essentially placed together and a lottery takes place to determine which federal district court will hear the case.

“Look, this isn’t anything new; the Department of Justice has at times forum shopped,” says the New York attorney. “You saw it with some terrorism cases. But I can’t think of a time when a federal agency sent out a kind of ‘wink, wink, nod nod’ press release that encouraged others to file with different federal courts so the agency can rig the system for a friendlier legal venue. I wouldn’t go so far to say it’s unethical, but it’s highly unusual. If I were in Congress, I’d be demanding an explanation, and if I were a federal judge I’d sure be annoyed at the agency for gamesmanship.”

The next Media Marxist “forum shopping” charge levied against the FCC – will be the first. For the recently and routinely raucous PIGs, this has been a Simon & Garfunkel moment.

So Verizon executes a shimmering legal move, and it leaves the PIGs at once flustered, flummoxed and fumbling for an adequate response.

Thus far, the Mighty Marxists have struck out. There is as yet no joy in Luddville.