Once the light bulb represented ideas; today, its shoddy, government-mandated replacement, the compact fluorescent lamp (CFL), has come to represent everything that is wrong with the GOP leadership in Congress. It’s time to get rid of the dim bulbs, figuratively and literally.

The problem is not just one more idiotic, nanny state proclamation from a Congress that generates almost as many idiotic, nanny state proclamations as it does creepy texted self-portraits. The bigger problem is the conservative base’s crisis of confidence in our pseudoconservative Congressional leadership brought on by its utter failure to get the message from the base and act on it as it promised. And the symbol of this bait-and-switch Republican Congress is the light bulb. 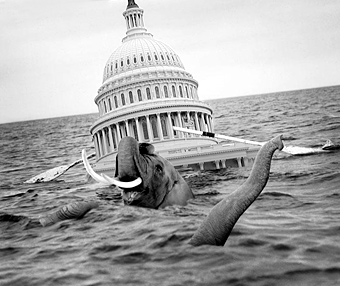 As reported by Michael Patrick Leahy (with a hat tip to the incomparable Instapundit), Congressman Fred Upton really, really wanted to be the Chairman of the House Energy and Commerce Committee after the 2010 turnover, but there was a problem. Upton had been part of the cadre of nimrods who introduced the ban on incandescent light bulbs back in 2007; they are to be completely banned effective January 1, 2012, in favor of CFLs.

Now, for a truly conservative party, this unbelievable misjudgment would disqualify Upton from any position of responsibility above that requiring the operation of a mop and pail. It demonstrates an arrogant, petty fascist commitment to telling fellow Americans what is best for them. Strike One. It demonstrates a belief in the voodoo religion of global warming. Strike two. And it’s just plain obnoxious – what kind of half-wit thinks it’s a bright idea to force all Americans to abandon safe, cheap incandescent bulbs in favor of overpriced, toxic mercury-harboring devices whose dank glow brightens nothing but the hearts of hair-shirted enviro-wackos, crony capitalist CFL manufacturers, and gloom-adoring emo kids. Strike three.

If the Republican Party can’t make a stand at the government telling us what kind of light bulbs to use, what good is it?

Evidently none, because it won’t take that stand. Against all common sense – a continuing theme – Speaker John Boehner let Upton have the chairmanship despite his unblemished track record of failure, buying Upton’s solemn promise to get right onto undoing the incandescent light bulb ban. Which, of course, he did not do – in fact, he has blocked the efforts of real conservatives to try and lift this noxious decree.

So, there are three possible conclusions to be drawn about Boehner and about the entire Republican House leadership. None of them are good.

The first is that they are suckers – that they actually believed Upton when he said he would do what he had no intention of doing. If so, this is unforgivable and the leadership needs to be replaced. We don’t need the Washington GOP lead by naïfs; if some obscure congressman from Michigan can roll them that thoroughly, the Democrats are going to ransack their lunch money and leave them hanging from the Capitol flagpole by their wedgies.

The second possible conclusion is that the leadership always knew that Upton was lying worse than Clinton in a deposition but thought it was A-OK. If so, this is unforgivable and the leadership needs to be replaced. It means that what is actually happening is exactly what it looks like is happening – that a bunch of conservafraud Republican congressmen rode the right-wing wave back into a majority with absolutely no intention of doing what they promised those Tea Party rubes. It means that their rationale for a new Republican majority was not the ability to do the things necessary to bring our country out of the ditch they helped put it into but to regain their lost perks, privileges and positions.

Let me clarify: Perhaps a team of renowned scientists, philosophers and theologians could identify something I and the rest of the conservative base care less about than the prestige, comfort and career trajectory of Republican politicians, but I doubt it. We didn’t vote for them so they could cash in on government; we voted for them so they could keep the cash out of government.

Now, the third possibility is that this is some sort of cunning plan to keep this issue alive to use against the Democrats next year, as postulated by Virginia Postrel. Except that notion presumes a level of savvy, aggressiveness and bare-knuckle competitiveness that these guys couldn’t muster with a shot of testosterone and a personal tag-team tutorial by Machiavelli and Sun Tzu. This gang couldn’t organize an Anthony Weiner House gym photo shoot. But even if this is some kind of clever scheme, this is still unforgivable and the leadership needs to be replaced.

This is not the time for fiascos, or betrayals, or sneaky plans. It is the time for integrity, and the Republican leadership lost that when the true amount of its promised $100 billion in cuts went into a freefall justified by some of the lamest excuses ever uttered outside of a Los Angeles courtroom.

We in the base did not vote for Republicans so they could get their big offices back. We told them what we wanted. The leadership nodded its collective head, promised to do it, and has “fulfilled” that promise with a bunch of meaningless show votes that ensure nothing but the status quo.

That a nanny stater like Upton was ever seriously considered for the post – much less allowed to assume it – is just a symptom of the disease infecting the GOP leadership. Similarly, Boehner’s astonishing decision to go play golf with the President shows the same utter tonedeafness that is making the leadership the Democrat’s figurative blowup love doll. Not only does it help the President neutralize the well-deserved image of detached neglect illustrated by his never-ending series of trips to the links but it provides no benefit to our side. Boehner’s not going to talk Obama into rejecting his neo-socialist government fetish; hell, Boehner will be lucky if he leaves the course and still has his pants.

Why is he doing this? To show some sort of kumbaya-esque unity? We don’t want unity. We want to draw stark contrasts between the free market and free individuals vision of the conservative Republicans and the collectivist failure of our liberal opponents. We don’t want leaders who put some goody-goody notion of civility above a clear assertion of our values. We want winners, not losers left with their high fives hanging as their liberal buddies take them to the cleaners once again.

Gentlemen, this is UNSAT. And you better understand – if we are to be governed by irresponsible, lying, big government nanny-staters, we’d much rather that their names be followed by a “D” than an “R.” That way, not only does the Republican brand avoid dilution but the pseudo-cons who sold us out get screwed in the bargain.

If we’re going down, you’re going with us. Short-sighted? Yeah. Unreasonable? Perhaps. Your problem in 2012? Oh, hell yes.

The House Republican leadership is clearly not up to the task. It has failed to perform to even the most minimal standards of what was promised and what was expected. Boehner is a nice guy. He obviously loves his family and his country. I’d be happy to let him water my lawn while I’m on vacation if I was his neighbor. And I don’t care. Those are necessary qualities, but not sufficient ones. He and his cabal have demonstrated a total inability to perform to the standard required. They need to go.

And their fellow Republicans in the House need to say it – they need to say, “John, time to go.” Because if this nonsense doesn’t change but quick, it won’t be long before a figurative incandescent light bulb flicks on over the heads of millions of conservative voters as they realize that if the failed House leadership won’t go away, us conservative, for-now-GOP, voters sure as hell will.