Two weeks ago, Andrew Breitbart called me and laughingly told me that he had just boarded a plane and wanted me to guess who he had passed in first class as he made his way to his coach seat.

I immediately guessed that it was someone who publicly stands in “solidarity” with “the 99%” as he or she sips chardonnay in seats only the 1% can typically afford. It turned out to be Jodie Evans, co-founder of Code Pink, enjoying the good life. 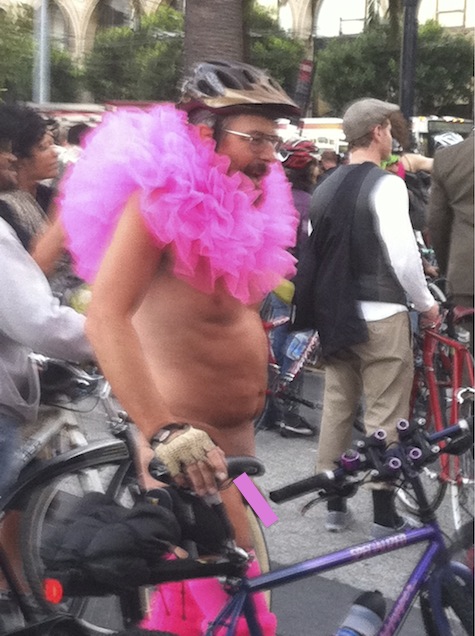 Andrew and I shared a laugh as we agreed that the ironic pattern of wealthy liberals critiquing “the rich” while simultaneously living high on the hog was just too rich in itself.

And Andrew wondered aloud how someone who flies coach, as he travels multiple times a week, gets attacked as a rich and uncaring capitalist, while someone like Jodie Evans can fly first class and still relish her undying support from lefties.

Sadly, I both comprehend the answer and have experienced such moments of clear contradiction-with Jodie Evans herself.

Years ago, I was asked by anarchist Lisa Fithian to help her shut down the 2004 Halliburton shareholders’ meeting. She dispatched me and another young activist to go to the intended site of the meeting, specifically the Four Seasons Hotel in Houston. We followed our directions and scoped out the entrances and exits. We mapped out every possible way to shut the program down and to prevent access to the building or meeting room.

A room had been rented for several of us in the hotel the day before the meeting. Though nice, our room was very crowded and on the lower levels. The organizers had only rented one room for all of the activists involved. Though I knew Fithian was directing the operation, I still didn’t know who else was behind the scenes.

Fithian called me late that night and told me to come up to a penthouse suite on the upper levels of the hotel. She asked me to come alone, and I did. I didn’t seem to raise any suspicion from hotel staff as I made my way up to the top floors. I knocked, the door opened, and lo and behold–there sat Lisa Fithian next to the famed Jodie Evans. A woman named Andrea Buffa who worked for Medea Benjamin’s Global Exchange was also present. They instructed me on what I was to do during the shareholders’ meeting in the morning and what they wanted the other embedded activists to do. I agreed and told them I’d make sure it happened. They said the other embedded activists and I would be arrested, and that “everything would be okay.”

I left the room feeling a bit strange that those of us facing arrest were crowded in a small lower floor room while our “leaders” were in a penthouse. The fancy room service with chocolate covered strawberries, champagne, and other delicacies didn’t really bother me until I got hungry later that night and realized our “officers” hadn’t thought to organize any food or beverage for us “soldiers” even though we had been strictly commanded not to leave the room they had provided.

Most of us in the crowded room didn’t sleep that night. The next morning we began to get dressed as I went over the plans with everyone. We left the room in pairs, dressed in suits. Each of us had a single handcuff on each wrist and had a third handcuff bracelet in our shirt pocket. The locks had been epoxied so that police couldn’t use a master key and get them off easily. As we walked past the final layer of security for the meeting, I looked at my watch, and it was just the time I had been instructed to lock on to the banister. I did it. The others did. There wasn’t any turning back at that point.

At that exact moment, several hundred protesters outside were told to lie down in the entrances to the hotel. They did so, and it took the police over half an hour to clear the entrances and exits. This was significant because since the police couldn’t cut us off the banisters, the fire department had to do so. But the fire department couldn’t pass the protesters until the police cleared them out. That resulted in approximately thirty-seven minutes of me and the others saying what we wanted and had been told to say. We talked about Halliburton sending empty supply trucks across Iraq just to charge our government for the “load.” We talked about the contracted truck drivers whose lives were being needlessly put at risk for increased profits. We were finally removed and arrested.

We were all immediately placed in a large cell. The toilets had overflowed and there wasn’t anywhere to sit or lie down. I didn’t really mind the situation because I felt I was “doing it for the shared struggle.”

Well, I started to mind it shortly thereafter. We got word that we hadn’t been provided the attorneys our “leaders” had promised. We also got word that our “leaders” had decided not to “lock down” as we had all agreed to do. Jodie Evans had decided to drop a banner out of her window instead and had walked away after the banner had been removed. Our leaders didn’t go to jail.

The worst part of it all was when I got word that our penthouse-dwelling, chocolate-covered-strawberries-room-service-ordering, champagne-drinking “leaders” had never provided our bail money. So much for “solidarity.”

Various activists raised our bail money and we were released that night. A local attorney agreed to represent all of us and told us that it wasn’t cool to put attorneys on the spot like that. We explained that we had been told attorneys would be provided.

We basically all paid five hundred dollars each and got a trespassing charge on our records. Our action was covered in the business sections of newspapers in several countries. Afterwards, our government investigated our accusations against Halliburton and ordered it to repay something like eighty million dollars for empty loads it had billed and for which it had been paid.

Needless to say, I wasn’t surprised to hear Jodie Evans was traveling in first class on Andrew’s flight.

To be fair, not all of the “elite” leftist leadership is as stingy as Evans.

Take Michael Moore, for instance. In the immediate aftermath of Hurricane Katrina, as one former Black Panther, one radical eco- and animal-rights-terrorism supporter, and I were close to an armed standoff with police and a racist militia, Michael Moore put his money where his mouth is.

The Black Panther was Malik Rahim. He was famous for his shootout with the New Orleans police in the 1970s. After earning a long and lengthy rap sheet, he changed his name from Donald Guiton to Malik Rahim and has been adored by the left every since. The eco- and animal-rights-terrorism advocate was Scott Crow. Crow openly gave a speech which the group’s pirate radio station aired over and over again for months. Crow stated clearly that we were a “paramilitary organization,” armed and in “solidarity” with foreign armed movements, including the people of Chiapas. Such talk of being armed and working with foreign armed movements didn’t deter Michael Moore from sending $200,000 through Veterans for Peace to help fund what we were doing. I guess as the closest thing to an armed resistance movement the U.S. had since the 1960s and 1970s, Moore couldn’t pass up drowning us in money.

Thankfully, we never had to find out whether or not Moore would have followed through with bail money if we had been busted for our almost-revolutionary struggle.

If subsequent history is any indicator, Jodie Evans would have left us high and dry–while she flew away in first class.