The Greater Wisconsin Political Fund is a 527 political organization, but it is stridently anti-Scott Walker and over the past couple of days Wisconsin residents have been receiving very disturbing mailings that not only attempt to shame you and your neighbors into voting, but also threaten to publicly shame you if you don’t vote in the June 5 recall election. [click the image below to enlarge] 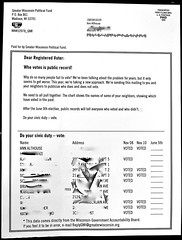 Wisconsin blogger Ann Althouse received this, what she called “the most disgusting thing I have ever received in the mail”:

Who votes is public record!

Why do so many people fail to vote? We’ve been talking about the problem for years and it only seems to get worse. This year, we’re taking a new approach. We’re sending this mailing to you and your neighbors to publicize who does and doesn’t vote.

We need to pull together. The chart shows the names of some of your neighbors, showing which voted in the past.

After the June 5th election, public records will tell everyone who voted and who didn’t.

Do your civic duty — vote.

[B]e assured, this was a list of real names and addresses of people who live near me, with the information about whether they voted in the last 2 elections. This is an effort to shame and pressure people about voting, and it is truly despicable.

According to the Janesville Gazette (Janesville is a fair-sized city in southern Wisconsin), there was a similar mailer sent out by the same organization with the same veiled threat:

The mailing includes a note to “Dear Registered Voter” which says, in part: “Look at the list below: Are there neighbors on this list you know? Call them or knock on their door before Election Day, and ask them to go vote on Tuesday, June 5. After the June 5th election, public records will tell everyone who voted and who didn’t. Do your civic duty–vote and remind your neighbors to vote.”

The mailing goes on to list the recipient’s name, address and whether he or she voted in November 2008 and November 2010. The same information is provided for 12 neighbors.

More proof that the left gets more ridiculous, fascist, and repugnant as their desperation increases.