Over the weekend I wrote about Barack Obama’s involvement in the New Party as a dues-paying member. I followed up with an article on Noam Chomsky’s take(circa 1997) on where the New Party belonged on the politicalcontinuum. Chomsky said the New Party was aimed at creating “some kindof social democratic version of state capitalism.” As I explained,Europe, though it has been on the decline in recent years.

Further evidence that Obama fit right in with this brand ofEuro-socialism can be found in another endorsement he received back in2000. The Democratic Socialists of America endorsed Obama whenhe ran against Bobby Rush. Actually, the DSA endorsed Obama and Rush,but the basis of the Obama endorsement is interesting:

Barak [sic] Obama is serving only his second term in the IllinoisState Senate so he might be fairly charged with ambition, butthe same might have be said of Bobby Rush when he ran againstCongressman Charles Hayes. Obama also has put in time at the grassroots, working for five years as a community organizer in Harlemand in Chicago. When Obama participated in a 1996 UofC YDS TownhallMeeting on Economic Insecurity, much of what he had to say waswell within the mainstream of European social democracy. To volunteer,call… [emphasis added]

The 1996 meeting on Economic Insecurity is something we’ve knownabout for a while. Last month Buzzfeed’s Andrew Kaczynski uncovered anad from the local Hyde Park paper advertising the talk. 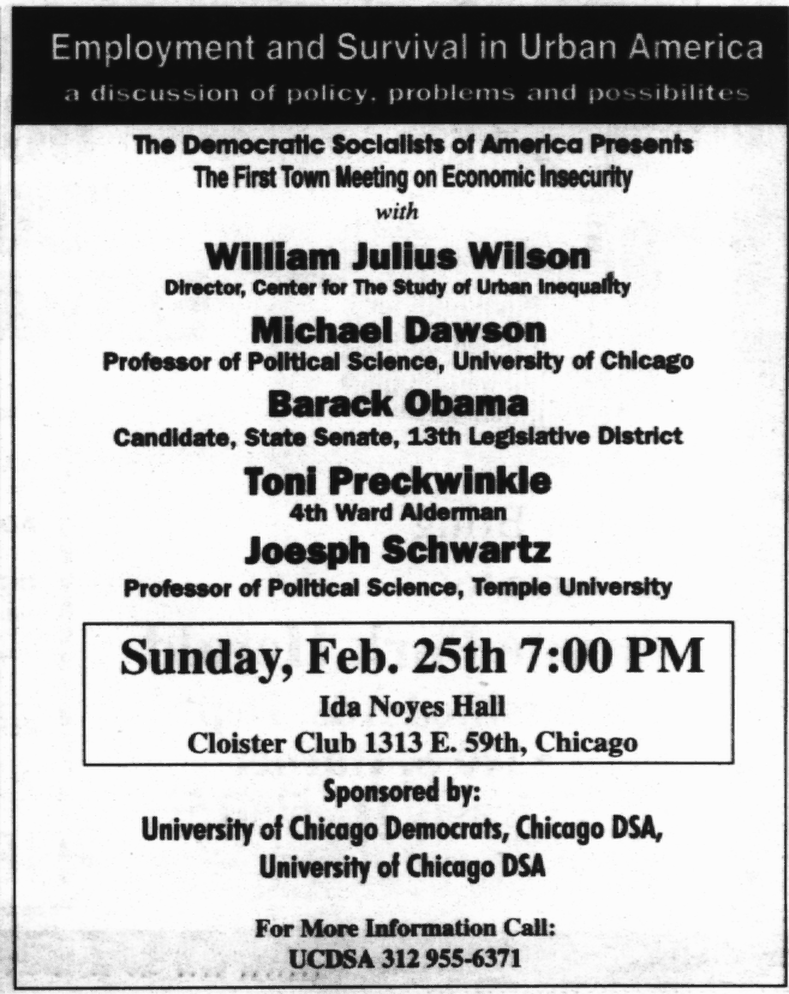 But notice that the Democratic Socialists of America suggestedObama’s talk was right in line with “European social democracy.” Again,that’s exactly where Noam Chomsky placed the New Party in hiscontemporaneous description. So if Obama talks like a social democratand joined a social democratic party, it’s probably safe to conclude hewas a social democrat at this time.

Now if you’re paying very close attention, you may notice that the NewParty (and Obama) are described as social democrats, while the DGAbills itself as democratic socialists. What’s the difference? A fewweeks ago, I came across a video by a member of the DemocraticSocialists of America. His name is Joseph Schwartz, and he’s a professorof political science at Temple University. He’s also one of the peoplewho was part of the 1996 “Economic Insecurity” event with Barack Obamamentioned above. Here’s what Professor Schwartz had to say aboutsocial democracy and democratic socialism in a recent lecture:

Professor Schwartz puts on an entertaining and interesting presentation. You can view the entire unedited clip here.I think the takeaway with regard to the President is that socialdemocrats, like the New Party, are not anti-capitalist per se, but theydo believe in government driving the engine of capitalism. This is arguably consistent with much of what Obama has done and said as President in the last three years, from government control of private health insurance to aggressive new EPA regulations to the failed attempt at “Cap and Trade.”

Obviously, there is a continuum of political views which makes it difficult to define where one view begins and another ends. That said, the evidence suggests that, at one pointnot so very long ago, Obama identified himself with (and was identifiedby other socialists as being in line with) Euro-style social democracy.