**UPDATE: Without so much as a notification, the Obama campaign has removed the “lady parts.”

The screen cap below can currently be found on the “Obama 2012 campaign’s official home on Tumblr,” where you have to submit whatever you would like to post on the official page prior to approval.

In other words, the Obama campaign approved this: 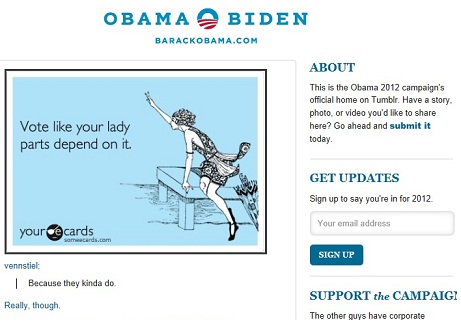 In this classless White House, between desecrating the American flag with Obama’s ego, campaign t-shirts with the F-bomb on them, and the President’s willingness to fundraise in Vegas the same day we learned our Libyan ambassador had been assassinated — this sort of tackiness is becoming the norm, not the exception.

Is “patronizing” one of the weapons in this manufactured War on Women?