Mitt Romney closed his campaign in the state where it began — New Hampshire — in front of a raucous, energetic, and enthusiastic crowd of over 10,000 at the Verizon Center. Thousands more people were outside of the arena, unable to get into the event.

“This is a special moment for Ann and for me because this is where our campaign began,” Romney said, noting that his victory in New Hampshire’s primary put him “on the path to win the Republican nomination.”

Rock Star Kid Rock performed at the event, which Romney used to contrast his hopeful message for America with Obama’s campaign.

Romney predicted, “Tomorrow, your votes and work here in New Hampshire will help me become the next president of the United States.”

Obama won New Hampshire by 10 points in 2008 but is essentially tied with Romney heading into Election Day, with momentum on Romney’s side.

Romney claimed Obama was “offering excuses” while he offered an alternative plan — that Obama wants “to settle” while he could not wait to get started.

Romney maintained Obama “says it has to be this way, I say it can’t stay this way.”

“Tomorrow, we get to work rebuilding our country,” Romney said.

Romney said Election Day would be a moment of “renewal, purpose, and optimism” for America once he is elected.

Romney and Ryan have been drawing massive crowds in Ohio, Pennsylvania, Wisconsin, and Minnesota in the closing days of the campaign. The Republican challengers have expanded the electoral map while Democrats have played defense in states Obama won by ten points in 2008.

On Tuesday, Romney will make stops in Cleveland, Ohio and Pittsburgh, Pennsylvania on Election Day.

Romney’s stops in Obama’s turf is reminiscent of Obama’s stop in Indiana on Election Day in 2008 when he tried to win a red state from Republicans and expand the map.

In 2008, Obama won Indiana, and Romney is hoping his stops in Ohio and Pennsylvania in 2012 will help him carry those states.

Another photo, from Romney adviser Ted Newton, shows the rafters of the Verizon Center filled to capacity: 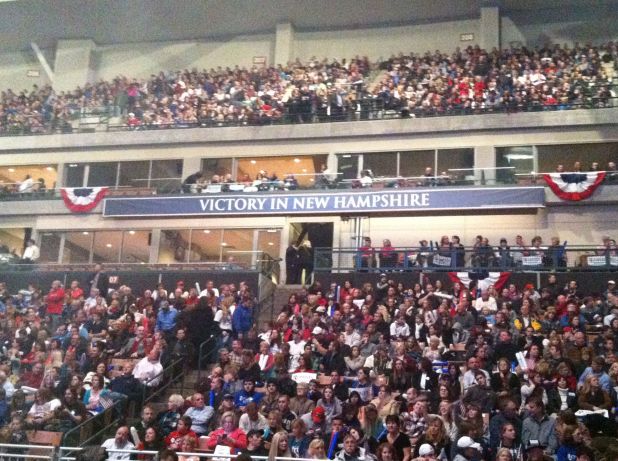