Here is an image of the first man, from the front: 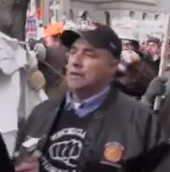 Both should be prosecuted; Crowder also would likely be able to pursue civil claims against both for assault and battery.

Obama traveled to Michigan yesterday to support the unions’ protest against the laws, which would allow most workers to decline union membership. Currently, many workers in Michigan are forced to join unions as a condition of employment. Republicans sought to change the law to make the state more competitive. Right-to-work states typically enjoy faster economic growth, higher job creation and lower unemployment rates.

Fellow Democrat Doug Geiss, a state legislator, had vowed earlier that “there will be blood” if the legislation passed; he failed to apologize, merely stating that he supported “nonviolence” in union protests. No Democrat or union representative, as of this writing, has apologized for the violence that took place today in Lansing.

In the past, conservatives have been held to account for random acts of violence that were entirely unrelated to anything they had said or done. In January 2011, for example, Gov. Sarah Palin was held responsible by media commentators for Jared Loughner’s crazed shooting spree in Arizona, merely because she previously used a political map with targets on it, indicating places where she focused her efforts in the 2010 elections.

In this case, the connection with Obama is direct. He went to Michigan to encourage the unions and oppose the state government; the unions turned out to protest and attacked those who had come to support the right-to-work legislation. In addition to the assault on Crowder, union members tore down a tent that had been pitched by Americans for Prosperity; Breitbart News’ Lee Stranahan captured the union members’ attack as the tent collapsed, with people inside, as union marshals looked on.

It is time for President Obama to live up to the commitment to “civility” he promised after Tucson, admonish his union allies, and apologize.