Port Washington, New York is one the most liberal areas in the country. And high school students at the local Paul Schreiber High School are being subjected to left-wing propaganda: as they walk through one of the main corridors, they see a giant mural of President Obama’s face.

Conservative students believe the mural has created tension, and an uneasy learning environment. A group of Schreiber students, led by sophomore Jacob Bloch, have begun to take a stand against the mural.

“There is no denying that the Republican minority of students feels intimidation while walking down Schreiber hallways.” Jacob said in an email interview. “We feel, quite frankly, that we are in a hostile environment in Schreiber, politically speaking. We do not see a free learning environment, where students can develop their own political ideas. What we do see, are students walking down the hallways, and seeing liberal ideas as right, and conservative ideas as wrong.”

The students are beginning the process of collecting signatures to petition for the mural to be taken down. “We want to make clear that this isn’t a partisan issue; this is an issue of fairness.” said Ryan Capps, a Schreiber sophomore. “We want the best, most balanced learning environment for all.”

Fellow sophomore Noah Hirsch added: “I feel that our conservative views have been lost in our largely liberal high school, and this is manifested in the mural.” 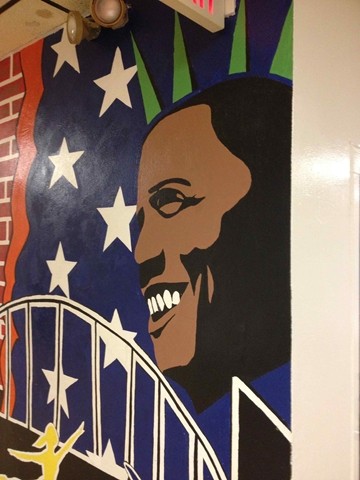 The late Andrew Breitbart supported similar campaigns against blatant left-wing indoctrination in public schools through the use of murals.