In the highly-publicized race to face up against Senate Minority Leader Mitch McConnell (R-KY), Kentucky Secretary of State Alison Lundergan Grimes has thrown her hat into the ring – though if her campaign launch is any indicator, there is significantly less enthusiasm for her than there was for prospective Democrat nominee Ashley Judd. Grimes’ announcement led off with the wrong backdrop (it was a campaign backdrop from her run for Secretary of State – her staff announced it was the only backdrop they had). 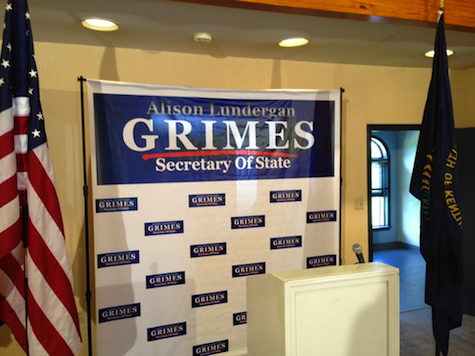 The podium carried one microphone stuck in a toilet paper roll. 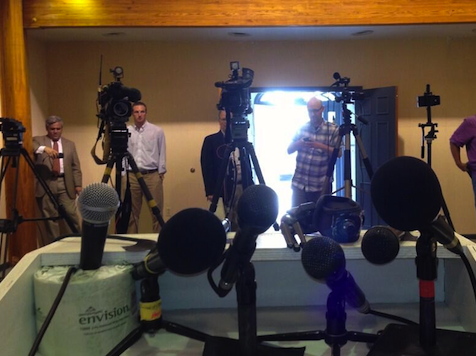 And the media presence was less than inspiring.

Her press conference was “halting,” in the words of Grimes-friendly Time. Joe Gerth of The Courier-Journal (who tweeted the pictures above) complained, “Sweating. You’d think Jerry Lundergan could pay to keep the AC on.”

Grimes is widely perceived in the state as a wooden politician with little charisma, and a family legacy of Democratic Party politics (her father was former Democratic Party state chairman Jerry Lundergan). She has taken money from the lawyers’ lobby, as well as the tobacco lobby, and banking and gas interests. She has also refused to condemn the illegal recording of McConnell’s office by Progress Kentucky executives.