As many of the texts had already been made public, much of the information in the new documents is not new, though it now has a name to it. It has now been revealed that Wildstein made the “they are the children of Buono voters” quip, which he said in response to concerns that the four-hour traffic jam was making it impossible for children to get to school on the first week of classes.

But there is new information revealed highlighting the demeanor and general attitude towards the law that Wildstein and those around him assumed when making decisions that could affect thousands. The most salacious exchange of texts occurred between Wildstein and former Christie Deputy Chief of Staff Bridget Kelly about Rabbi Mendy Carlebach.

Carlebach is a prominent member of his community and had traveled with Governor Christie in the past, but he is otherwise seemingly completely unrelated to Wildstein’s operation. Wildstein sent Kelly a picture of Rabbi Carlebach and insisted that the Rabbi had “officially pissed me off.” He does not explain why, but Kelly jokes that “we cannot cause traffic problems in front of his house,” to which Wildstein replies, “Flights to Tel Aviv all mysteriously delayed.”

From the transcripts (Wildstein’s texts appear on the right.): 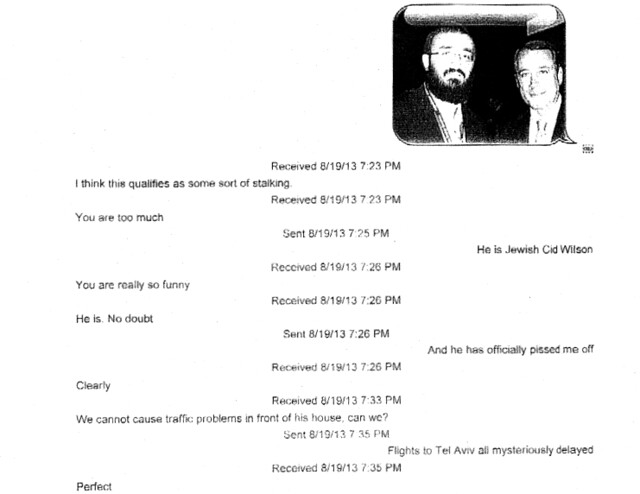 The closest to an explanation Wildstein gives Kelly for being so angry at Rabbi Carlebach is that he is a “Jewish Cid Wilson,” referring to a Bergen County financial analyst who told the Bergen Record that he had never met Wildstein and was “deeply appalled and offended” to have been roped into Wildstein’s schemes in any way. “The guy is clearly troubled, and I think he’s a psychopath,” Wilson later added about Wildstein.

Speaking to the Bergen Record himself, Rabbi Carlebach appeared equally confused as to how he ended up on the receiving end of Wildstein’s wrath. Unlike Wilson, Rabbi Carlebach told the paper that he did know Kelly and Wildstein but only “in passing” and had “no knowledge nor understanding of why my name was mentioned in these exchanges.” He added, “My work has always been apolitical.”

In discussing the new material, the head of the legislature’s investigation John Wisniewski (who also makes some appearances in texts, though only mentioned as a person present at BridgeGate hearings), called Wildstein’s display a “juvenile, cavalier attitude” towards government.

Wildstein, who personally orchestrated the closing of lanes on the George Washington Bridge, has repeatedly asked for prosecutorial immunity, requests that have been denied. He was held in contempt during the first round of BridgeGate hearings for pleading the Fifth Amendment on every single question.

Read all of the new documents published online Thursday here.