A study of donations that corporations have made to political candidates in the last 25 years finds that most of the groups at the top of the list either exclusively fund Democrats or are mostly left-leaning.

The study, from OpenSecrets.org, places Democratic funding organization ActBlue at the top of a list that only includes groups that donate individually to candidates or to organizations that make public the money they receive. They are also all “organizations that have historically qualified as ‘heavy hitters’–groups that lobby and spend big.” OpenSecrets explains that the advent of super PACs has made it easier for individuals to donate large sums of money in a way historically reserved for corporations, and the data is too new to reflect this. The group uses casino magnate Sheldon Adelson, who alone would make it to second place on the list, as an example of someone who does not fit their definition of “heavy hitter” and has too little history to be placed on the list, as well as former New York City Mayor Michael Bloomberg.

With that caveat, the group released a list of the donors who have contributed the most in American politics since the beginning of the first Bush administration. Every organization in the top ten, with the exceptions of AT&T and the National Association of Realtors, either leans left or exclusively donates to Democrats: 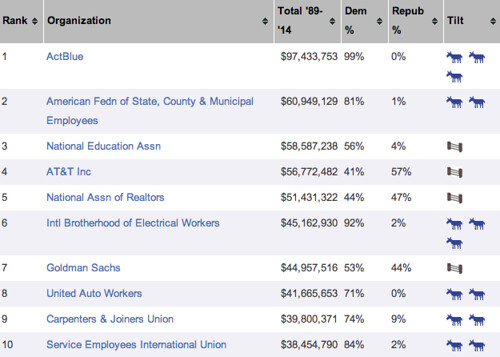 Notable organizations that donate heavily to Democrats are the Teamsters Union (#13), the pro-abortion group EMILY’s List (#21), and the AFL-CIO (#23). Read the full list here.

As noted above, the Supreme Court’s Citizens United ruling is expected to have a significant impact on the dynamics of this list of donors, including tipping the balance of power out of the hands of Democratic recipients of donations. Upon its passage, many on the left and some on the moderate right objected that the ruling would put too much political power in the hands of a wealthy few by allowing greater freedom of association for political groups in the form of super PACs. The apocalyptic predictions in the aftermath of the ruling–which included President Obama berating the Supreme Court over it during a State of the Union speech–have yet to come to fruition. Even including such changes in the law that expand the scope of freedom of expression, Democratic donor groups have a stranglehold on the top tier of campaign donation groups, and, the statistics show, are unlikely to lose it in the near future.