House Minority Leader Nancy Pelosi sent a letter to House Speaker John Boehner Friday reiterating a request from a previous letter for a “minimum standard” for Democrats to proceed with a bipartisan investigation into the 2012 terrorist attack on the U.S. Consulate and CIA annex in Benghazi, Libya.

“In that letter, we asked that Democrats have a real voice on the committee, including on (1) the issuance of subpoenas, (2) the manner in which witnesses would be questioned and deposed, and (3) the specific protocols governing how documents and other information would be obtained, used, and potentially released by the committee,” Pelosi wrote.

Pelosi noted in her letter to Boehner that while he suggested Wednesday that both meet “to find a path forward” and that their staffs meet in advance to work out preliminary issues, the proposed Memorandum of Understanding from Boehner’s staff was not acceptable to House Leadership after it was reviewed Thursday.

“Regrettably, the proposal does not prevent the unacceptable and repeated abuses committed by Chairman Issa in any meaningful way, and we find it fundamentally unfair,” Pelosi wrote.

Breitbart News sent an inquiry to Boehner’s office as well as called for a response to Pelosi’s letter and did not receive a statement.

Boehner has already appointed seven Republicans to the Benghazi Select Committee. Democrats have made it clear if their conditions are not met, their members may boycott the select committee all together.

Breitbart News acquired a copy of the letter, below: 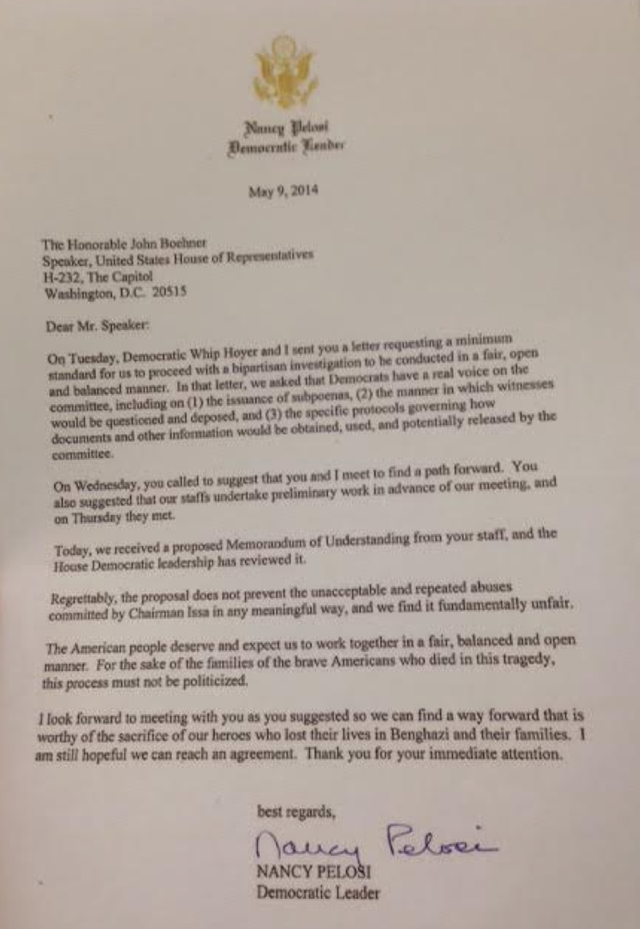