A McKinley Middle School teacher in Washington, D.C., has announced that he or she will apologize for assigning a controversial homework assignment to students–asking them to find comparisons between Adolf Hitler and George W. Bush and record them on a Venn diagram.

The teacher’s assignment dictated to students that “both men abused their powers” and asked them to find common ground between the Nazi dictator and our former president. As a result, parents complained that the teacher had displayed gross disrespect for the office of the President of the United States. 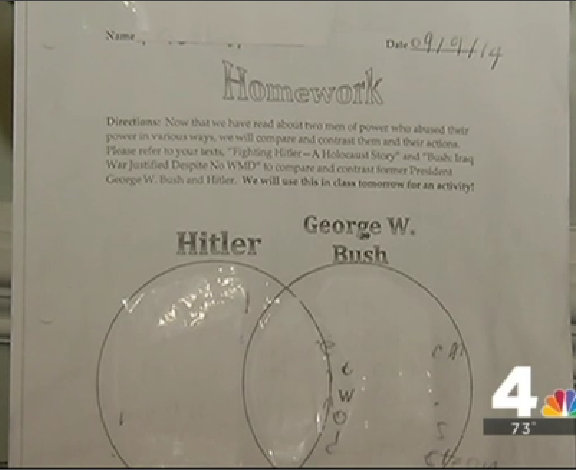 Directions: Now that we have read about two men of power who abused their power in various ways, we will compare and contrast them and their actions. Please refer to your texts, “Fighting Hitler — A Holocaust Story” and “Bush: Iraq War Justified Despite No WMD” to compare and contrast former President George W. Bush and Hitler. We will use this in class tomorrow for an activity!

The D.C. Public Schools system released an official statement Wednesday, not mentioning any punishment for the misconduct, instead stating that the teacher will “apologize to students.” The statement explained that the school allows its teachers “to be flexible” and that the Hitler-Bush homework the sixth-grade teacher assigned was an overreach of the school’s versatile curriculum.

The complete statement from the District of Columbia Public Schools read:

The District of Columbia Public Schools provides teachers with an English-Language Arts curriculum that outlines the topics, texts, and standards to be taught within instructional units, while allowing teachers the flexibility to decide the best approach and day-to-day lessons for their students. One of the units at the beginning of the year is about War and Peace, allowing students to explore different perspectives and determine when conflict is warranted, and when peace should prevail. This week, a DCPS teacher created a worksheet to assign as homework which asked students to compare and contrast President George W. Bush and Adolf Hitler, after reading two texts. No DCPS curriculum materials suggest in any way that teachers should compare the texts in this manner or compare Hitler to any other individual. One text, “Fighting Hitler – A Holocaust Story,” is part of the current suggested materials. The text about President Bush is not suggested as part of the current year’s curriculum, but was included last year in a separate unit. The teacher deeply regrets this mistake, and any suggestion to malign the presidency or make any comparison in this egregious way.

The teacher admits to extremely poor judgment and short sightedness and will apologize to students. The school will also send a letter home to families explaining the incident and offering to address any additional questions should they arise.

District spokeswoman Melissa Salmanowitz refused to tell multiple media outlets if the teacher will be disciplined.