Just 37% of Americans support Obamacare, while a full 56% disapprove. 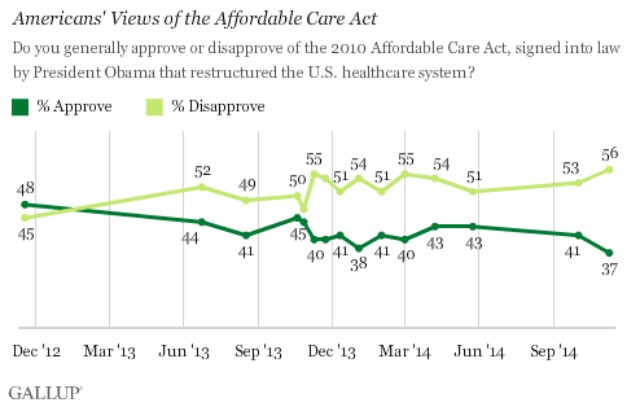 Nonwhite support for Obamacare has fallen below 60% for the first time, reports Gallup. Fifty-six percent of nonwhites back Obamacare, a figure nearly double that of white support (29%).

Indeed, support across all demographics may continue to fall. As former Health and Human Services Secretary Tevi Troy notes in Monday’s Wall Street Journal, the Obamacare “tax’s creeping reach is reminiscent of the Alternative Minimum Tax, which was originally designed to hit only the wealthiest taxpayers but now nails the middle class.”

Most troubling of all for Obama is the fact that the Gallup poll was taken Nov. 6-9, before the recent eruption of new Obamacare controversy involving the law’s key architect Jonathan Gruber. Gruber said Obamacare only passed due to the “stupidity of the American voter” and that a “lack of transparency is a huge political advantage” in ramming Obamacare through and was “really, really critical to get the thing to pass.”