Donald Trump, the real estate/reality TV mogul and current Republican frontrunner in the 2016 presidential primary, is holding a campaign rally Friday evening in Mobile, Alabama to a crowd of tens of thousands. Check out live updates from Breitbart News from this event. 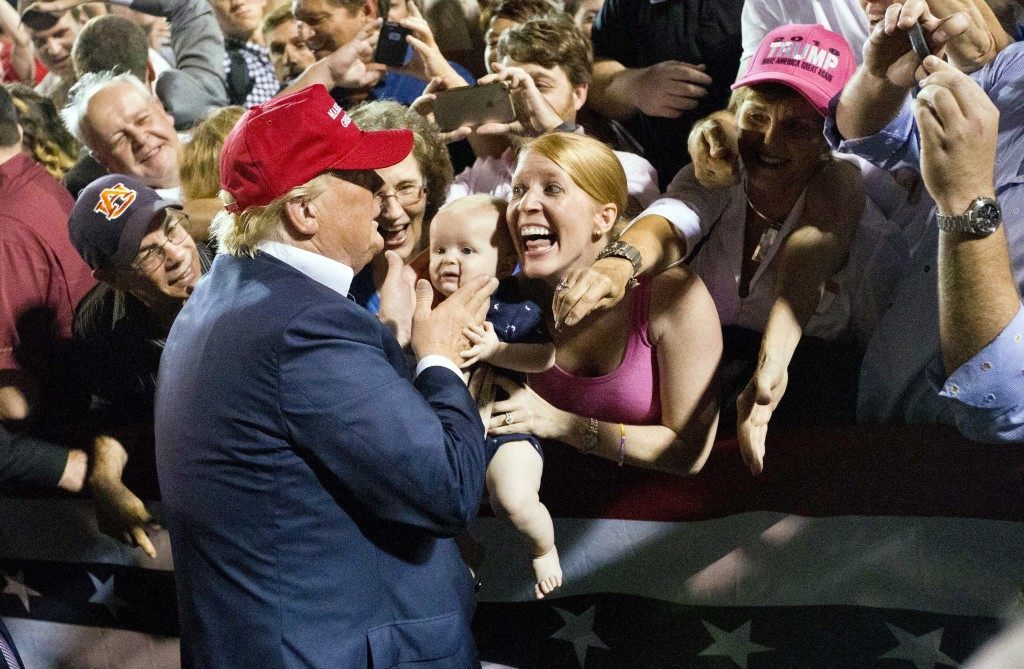 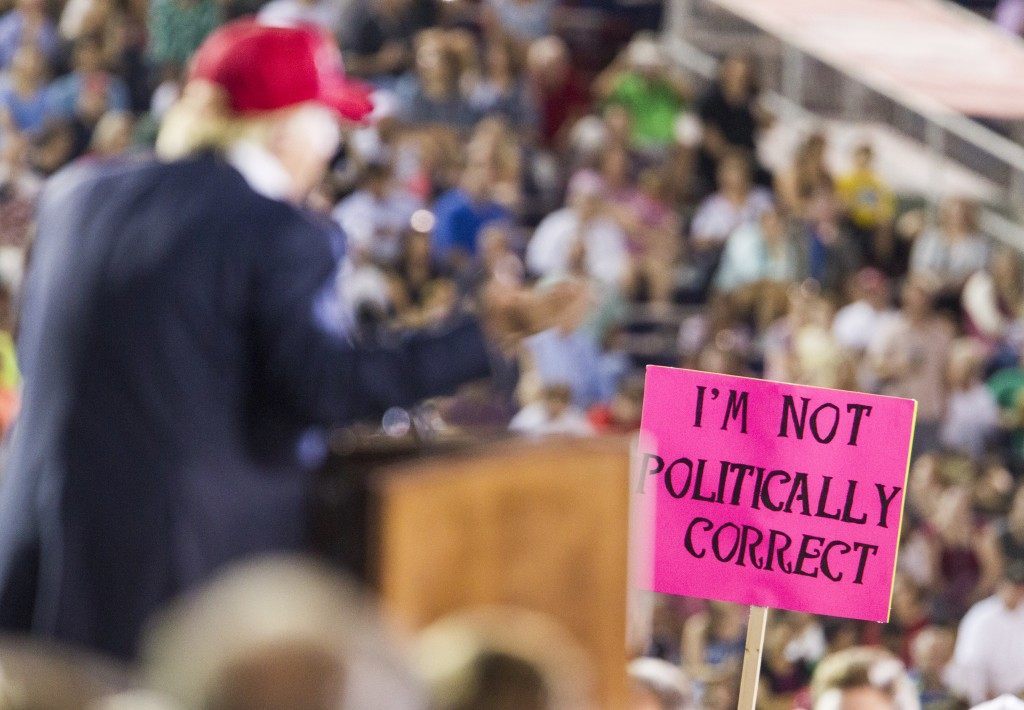 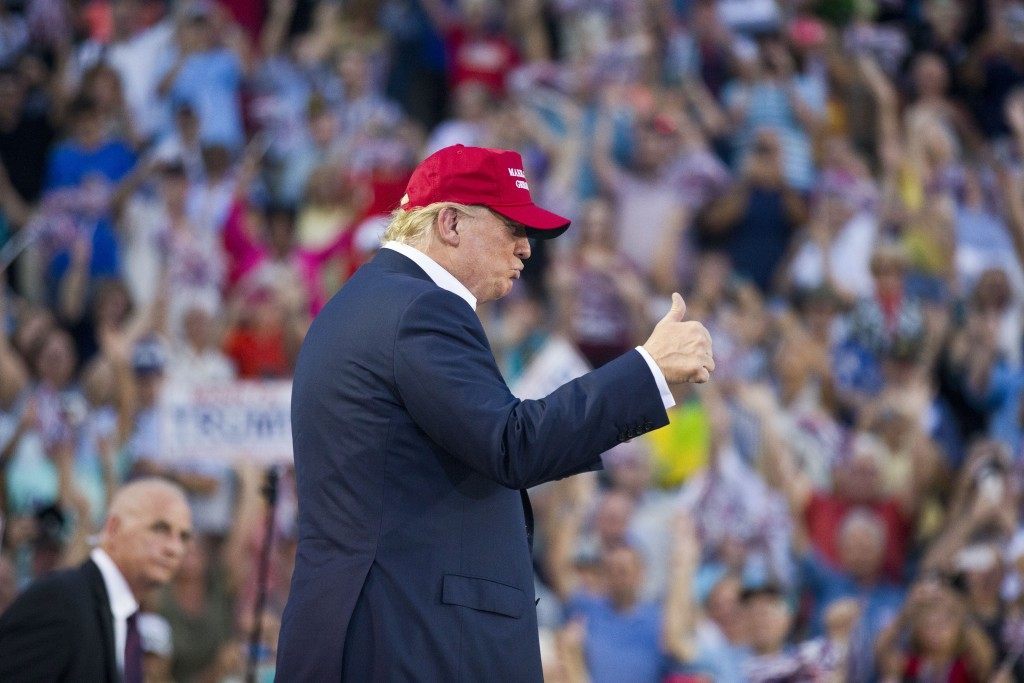 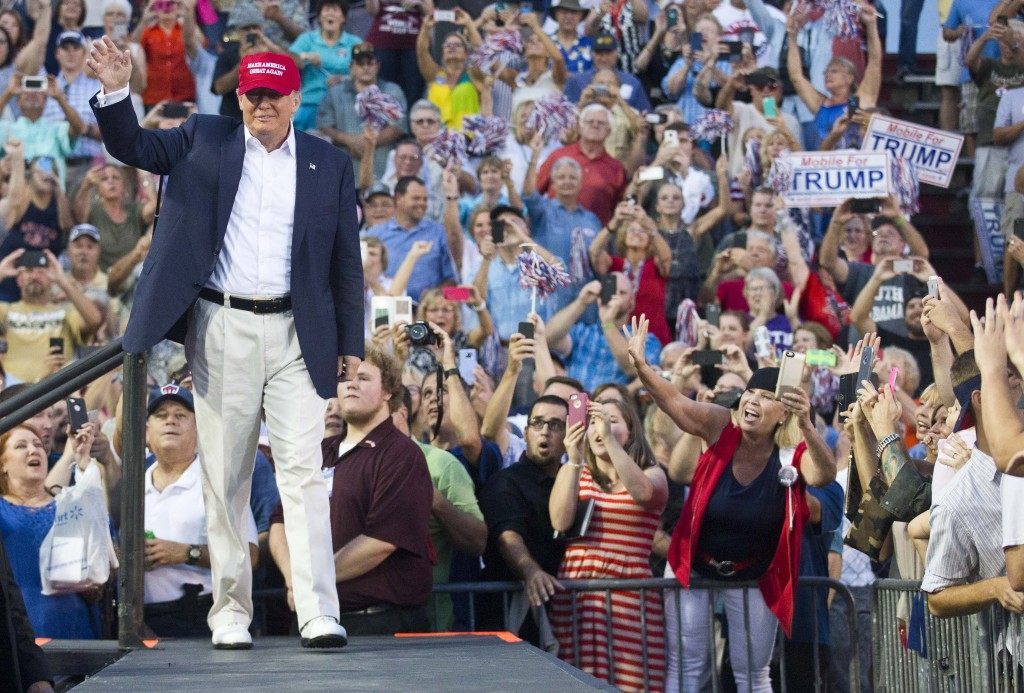 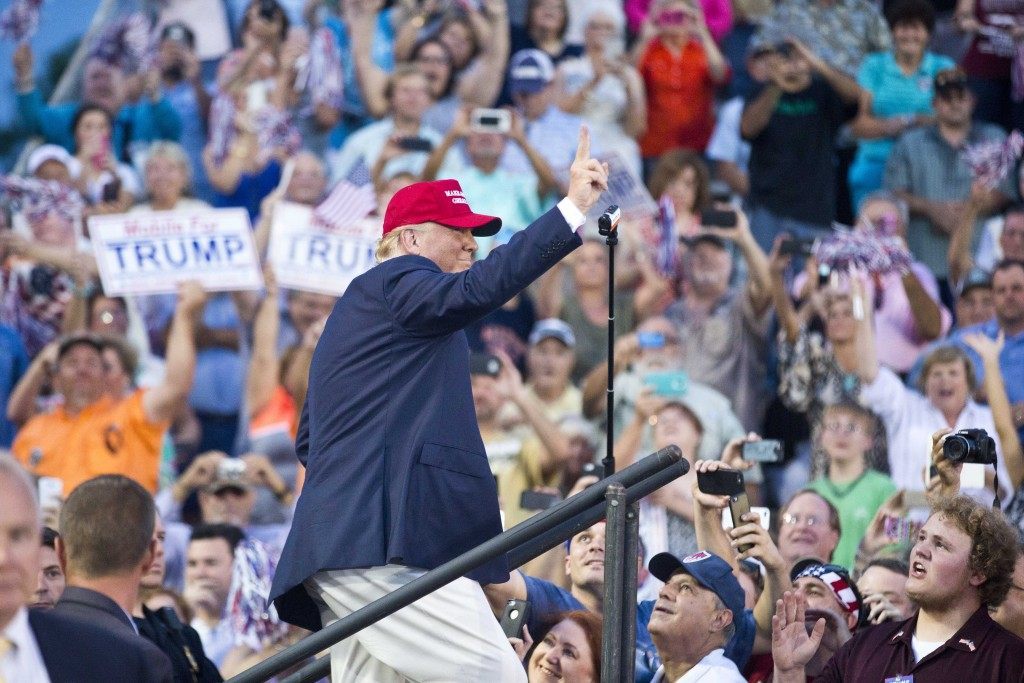 9:52 PM EST: Early estimates put the size of the crowd between 20 and 30 thousand people, which wasn’t enough to fill up the stadium. Check out more scenes from around the rally:

Panorama of crowd and stadium here in Mobile. #trump. pic.twitter.com/rLDMDzIrKo

The Sweet Home Alabama Trump rally. My daughter is there sending me pics. pic.twitter.com/Q5MbTDcJRV

I would say there's a pretty good crowd. And this is only about 2/3 of it! Good energy too! #TrumpRally pic.twitter.com/R4aYskzt8E

Beth Kenny voted Dem for all her life until now. Obama led the country into the ground, she said #Trump2016 pic.twitter.com/DXynughFCt

9:31 PM EST: Several reporters say Trump is skipping a press conference originally scheduled for after the speech. He leaves the stadium with Jeff Sessions in his convoy of SUVs.

Sessions, wearing Trump cap, and Trump, in a car ahead, zoomed off into the night. Trump joined in his SUV by son Eric, camp mgr Lewandowski

9:20 PM EST: No updates from Trump’s social media accounts through the speech–it’s all The Donald!

9:17 PM EST: In closing, Trump promises that in his campaign to make America great again, “we’re gonna have a lot of fun doing it.” Leaves the stage to Twisted Sister’s “We’re Not Gonna Take It.”

9:16 PM EST: Trump attacks Obama for failing to unite the country and sapping the people’s “spirit.” Says he expected him to be a great cheerleader for the country when he was first elected. Trump vows to end declarations that “the American Dream is dead.”

9:15 PM EST: America will not only be strong under President Trump but it will also be “loved.”

9:12 PM EST: Trump isolates 2 main criticisms of the Iran deal. 1) Why aren’t they giving us back our prisoners? 2) Iran is going to do its own policing and “tell us, ‘we swear we’re not building anything.’ It’s so sad.”

9:11 PM EST: Says we’ve let down Israel with the Iran deal. “They relied on us, they’re a voice of sanity, they’re great people, and we make a deal–” says Kerry breaking his leg in a bike crash was the only good part of that deal.

9:09 PM EST: Trump proposes a 35% tariff on goods from Mexico to push companies to move their manufacturing to the U.S.

9:06 PM EST: Trump, impressed with the number of live cameras present, says the media is less popular than Congress because of its dishonesty. Mentions that journalists have started treating him “much better” than since the beginning of his campaign.

A protester who didn't get within 30 yards of Trump has been taken out. pic.twitter.com/EGZdLbEowL

9:05 PM EST: Trump says a woman told him she wasn’t sure if he was nice enough to be president. Responds: This is not going to be an election based on a nice person but a competent person. “We’re tired of the nice people.”

9:04 PM EST: “For 35 years, these Senators–other than Jeff [Sessions], of course… they have done nothing for the vets [veterans].”

9:02 PM EST: Trump says he doesn’t have his own pollster. “Why do I need a pollster when every day there’s a new poll?” Says he saves money and doesn’t need pollsters to tell him what he can and can’t say.

8:57 PM EST: References a manufacturer friend who doesn’t like doing business with China–mentions huge tariff on U.S. imports to the PRC.

8:52 PM EST: Trump praises Japanese PM Shinzo Abe as a very smart leader, says Caroline Kennedy is totally outclassed in negotiations with Japan. Says he knows strong negotiators who could do much better than people like Kennedy, who says she took the job of Ambassador on a lark. “They’re killers. They’re negotiators.”

8:50 PM EST: In a discussion of foreign steel manufacturing, Trump takes a few seconds to compliment a sign in the crowd. Doesn’t read it back to those of us watching.

8:49 PM EST: Says that his family will manage his company now and he will devote his whole self to public service. “I just want to make this country so great, and that’s what’s gonna happen.”

Crowd has filled in a little more as the event has progressed #MobileAL pic.twitter.com/GAuhk9zTcB

8:47 PM EST: Trump brings up his financial disclosures–net worth and income. Ties it to his support–that people want him to run because of his personal ability: “Whatever it is, I know how to do things.”

8:43 PM EST: We are now on to Macy’s. Trump says that, contrary to mockery that he was just teasing about a presidential run, he has suffered damage to his “brand” because of his stand on immigration. Says it’s not fair for NBC and Univision to have taken away opportunity from Miss USA pageant contestants. Of the lawsuits against the latter: “I sued ’em for 500 million dollars; I want that money!”

8:39 PM EST: Trump says of various deals with foreign countries, “We get nothing”–including when U.S. troops are deployed to defend places like South Korea.

8:37 PM EST: Trump finds someone in the crowd holding his book The Art of the Deal. Says John Kerry and Barack Obama clearly haven’t read it, based on the Iran nuclear deal. In discussion of negotiations with foreign countries, mentions that he found an American manufacturer for his red campaign slogan hats.

8:36 PM EST: Trump daydreams about taking lobbyist money and doing nothing in return. Says of favors asked once in office, : “I’m not doing it unless it’s good and unless it’s gonna make America great again.”

8:34 PM EST: Trump does some crowing about his lead in the polls–especially Florida, where he leads Bush and Rubio. Says that if this were another country, we could call for an expedited election. “I would love that.”

8:33 PM EST: Sessions gives a quick greeting to Trump. Says of his immigration proposal: “I’m really impressed with your plan; I know it will make a difference.”

Sessions: “Welcome to my hometown, Mobile, Alabama. The American people want somebody in presidency who stands up for them.”

8:31 PM EST: Trump gets raucous applause by inviting Jeff Sessions on stage, citing their collaboration on immigration policy. “He’s been so spot-on–he’s so highly respected. Has anybody ever heard of Senator Jeff Sessions?” As Sessions walks up, compliments his energy: “He’s like 20 years old.”

8:28 PM EST: Trump: “The politicians, 10 years ago, 15 years ago, they all said they wanted a wall.” Now, he suggests, lobbyists have dissuaded them. Says Hillary Clinton has $60 million, Jeb Bush has $100+ million, suggesting they’re bought and paid for. Takes a little pride in Bush using the term “anchor baby.” Mentions the latest info in Hillary’s email scandal.

8:25 PM EST: Trump recounts the illegal immigration fight that sprang from his campaign kickoff speech. Cites Rush Limbaugh saying that he took intense incoming fire, then says “two weeks later everybody was apologizing to me.”

8:08 PM EST: As the crowd awaits Trump, a few more pics of attendees and their arrival.

Counting the stand and people on the field, maybe 20k at 7 pm local time pic.twitter.com/yPkM2ZQFEj 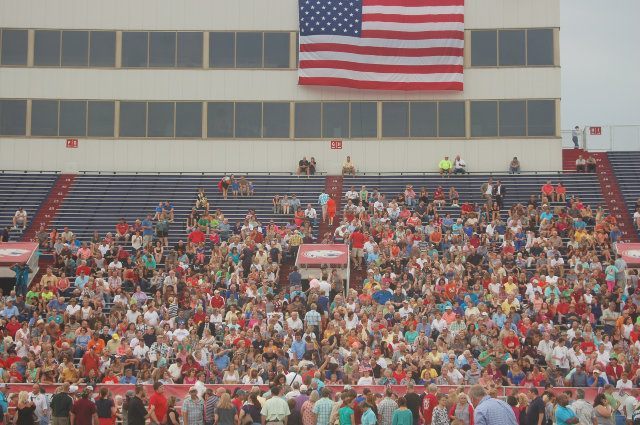 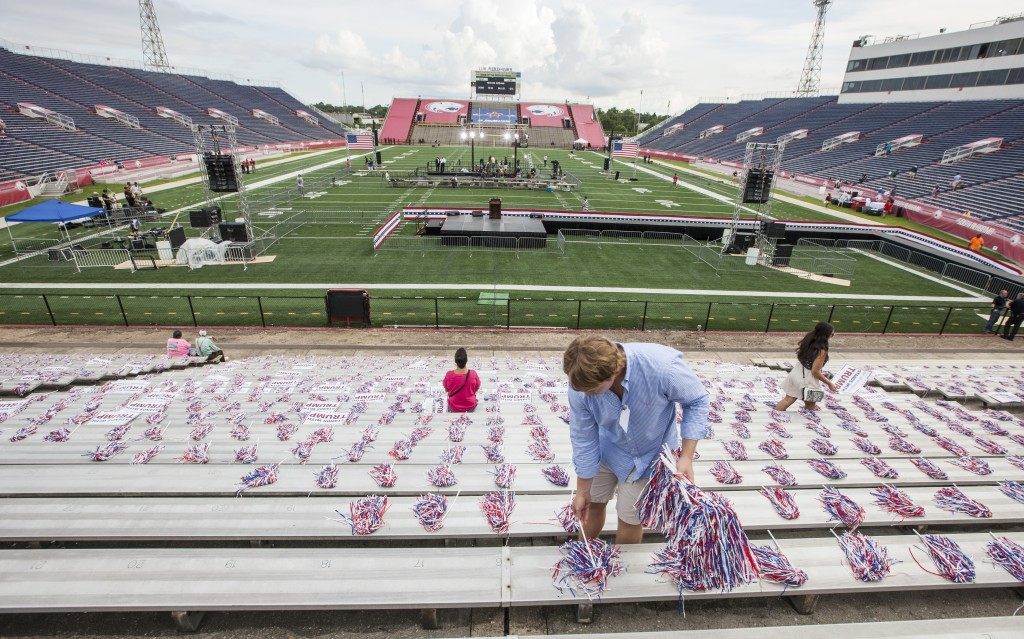 8:05 PM EST: Several local figures endorse Trump at the main podium. One speaker refers to the Trump phenomenon as “an avalanche of patriotism.”

State representative from north Alabama is speaking at Trump rally in Mobile. Says he drove five hours to endorse Trump.

8:02 PM EST: As the Pledge of Allegiance and National Anthem are performed, Trump arrives at the stadium with police escort.

@HolliMosley says she's ready to sing the Ntl Anthem tonight for the Trump rally. She'll be on right before Trump. pic.twitter.com/X16Bri8YmW

7:58 PM EST: Invocation pulling references from all over the Bible, reverend says times are tough but “there is hope in Mobile.”

Trump – invocation at his rally pic.twitter.com/lTo78fU3d5

The band warming up the crowd for Trump's arrival is Los Colognes, out of Nashville, TN http://t.co/bQBTsR7hrY #MobileAL 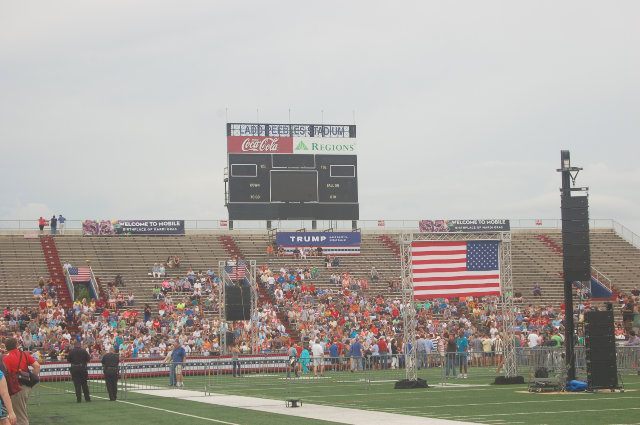 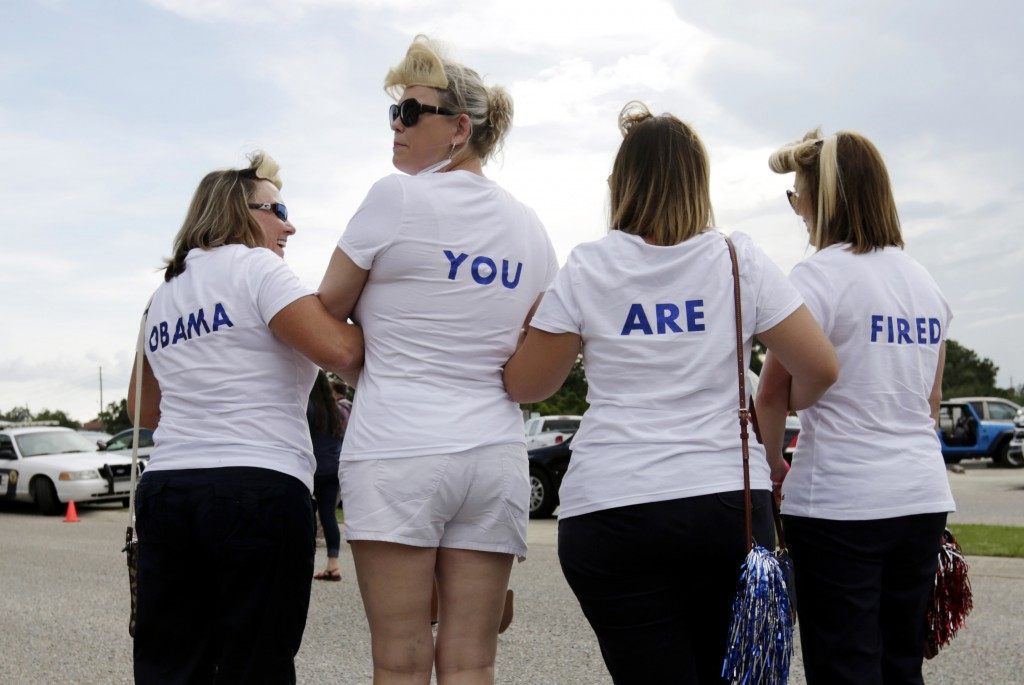 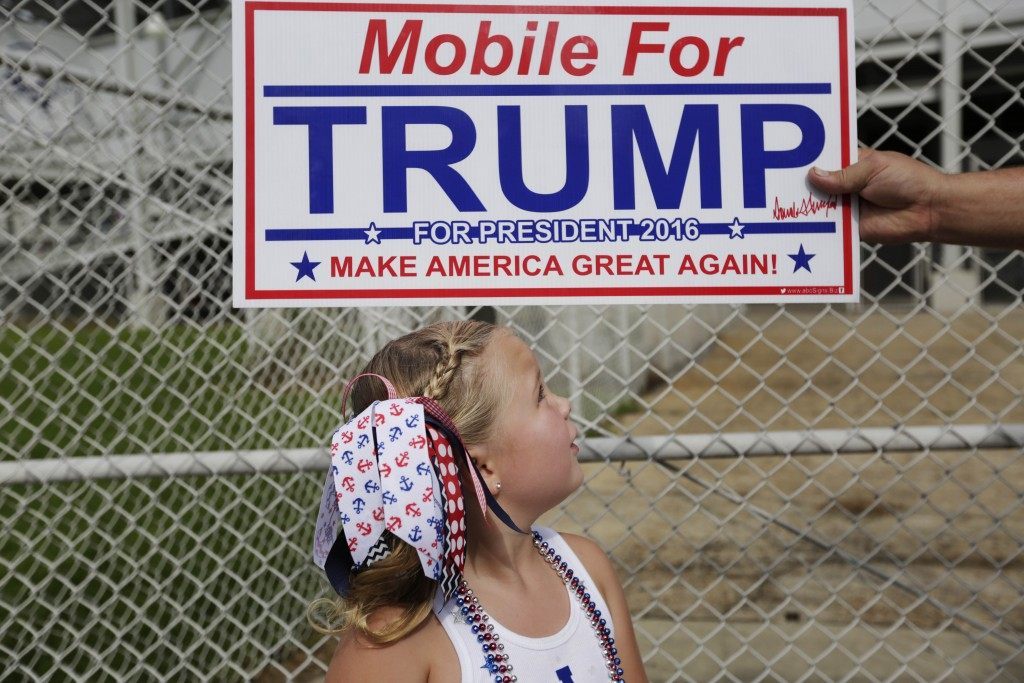 7:37 PM EST: Another plane appears with a heckling message from Jeb Bush’s Right to Rise PAC.

A pro-Jeb plane taunts with its own flyby. @murphymike tells WaPo it was paid for by Right to Rise super PAC. pic.twitter.com/t97GKtAvL5

This is only some of the people in line to see @realDonaldTrump tonight at his rally: http://t.co/RMwgWgrwEu pic.twitter.com/YfkCW8TWlf

7:13 PM EST: In Trump-esque fashion, the billionaire’s 757 jet flies over the Ladd-Peebles Stadium, much to the audience’s delight. 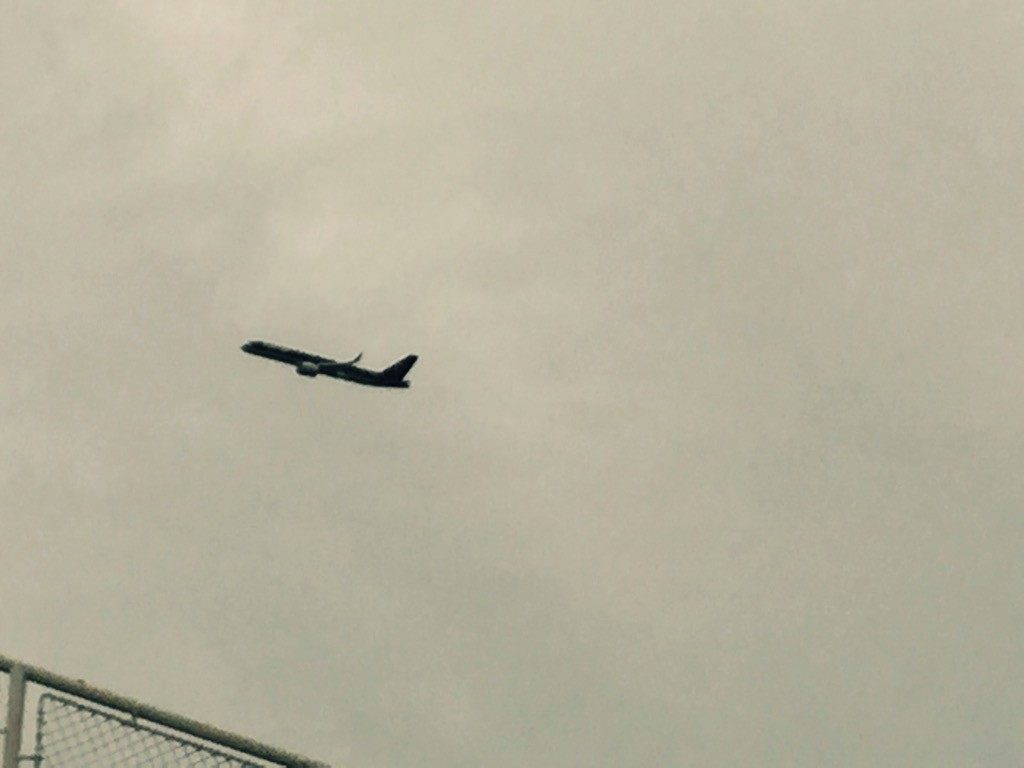 The plane circled the stadium, dipping its wing twd bleachers, as people roared and the Stones played. 757 with TRUMP across its navy side.

As the plane leaves, they played Van Halen's "Jump" — only with people yelling "Trump" at the "Jump" part.

The crowd cheers as the Trump plane flies over the field pic.twitter.com/XD2E6xaLm3

This is the wildest campaign I've ever seen. pic.twitter.com/jCnHTBRFU1

7:11 PM EST: To start of the rally, a group of students will recite the Pledge of Allegiance.