A narrow plurality of African Americans said they believe new groups like Black Lives Matter (BLM) represent them more than older groups, such as the National Association for the Advancement of Colored People (NAACP), says a new study from Brilliant Corners, a Washington, D.C.-based research firm.

In a sample size of more than five hundred African Americans aged 18 and older, the study found that 39 percent of respondents said organizations like Black Lives Matter speak for their community.

A smaller share of those surveyed, 34 percent, said older groups like the NAACP and the Urban League represent and speak for them. 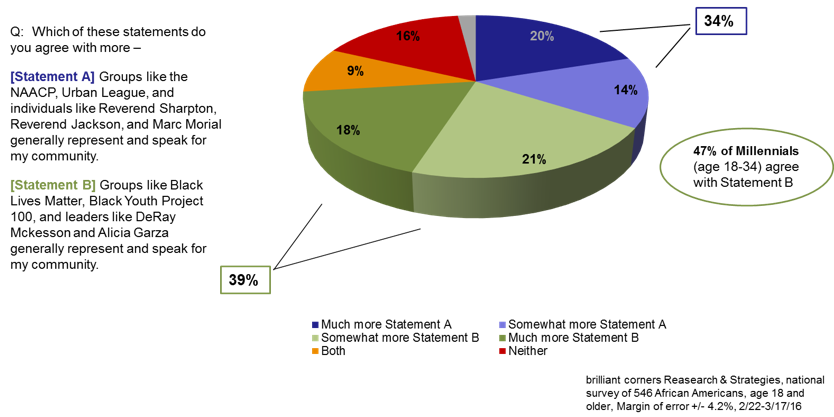 Cornell Belcher, president of Brilliant Corners, asked NewsOne Now host Roland Martin if this survey was evidence that “the baton [is] passed right now in our country around generational leadership,” adding, “What will this mean for politics in the future?”

“Clearly, as Obama steps off state, will you see more strident voices rise up?” Belcher asked.

Currently, few Black Lives Matter leaders are running for public office. And the ones who are have found little success.

Baltimore mayoral candidate and prominent Black Lives Matter activist DeRay Mckesson has consistently polled at less than one percent in that race to become Baltimore’s next mayor.

Nevertheless, Belcher said he was shocked at how quickly Black Lives Matter established itself, “challenging traditional Civil Rights organizations–icons–as representatives and speaking for them.”