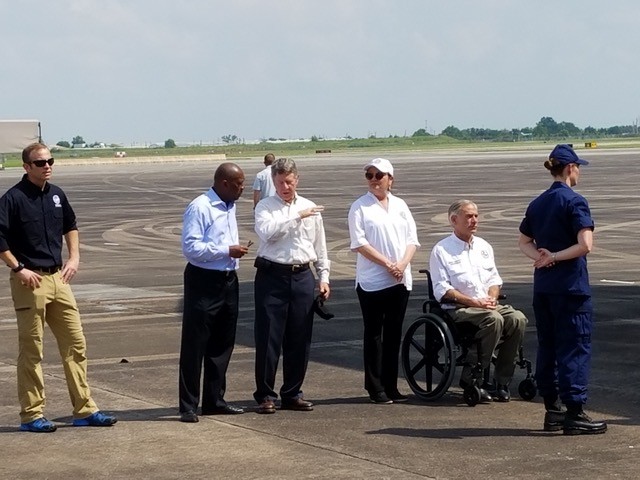 As the motorcade left the airport it passed a church where people were gathered with signs reading “we love Trump” and “Texans love stilettos.”

There were signs near the stadium that read, “No More Donations Accepted.” One guy outside of the stadium held a sign that said Not Our President.

Inside of the NRG relief center, President Trump and first lady Melania Trump met with families. He was seen speaking with and listening to families and taking photos with the children.

“Tomorrow, national prayer day, tomorrow,” the President projected to a pool of television cameras at one point.

“A lot of love,” the President told reporters of his time at the relief center. Asked about the families that the president met with, he replied, “They were just happy, saw a lot of happiness.”

“As tough as this was, it’s been a wonderful thing. I think even for the country to watch and for the world to watch,” Trump told the cameras. He then said he was going to leave the cameras to do “a little help over here.”

Another reporter asked the president how the people have responded to him. “They’re really happy with what’s going on. It’s been very well received,” replied Trump. He talked about the “fantastic” relationship between Gov. Abbott, Houston Mayor Turner, and the federal government.

“We’re signing a lot of documents now to get money into Houston, $7.9 billion. We signed it and now it’s going through a very quick, hopefully, quick process,” said Trump.

The president then moved over to an area where, alongside the first lady, he put on gloves and began serving meals that were labeled Red Cross. He was received warmly with handshakes from those in the line to accept meals. Some took selfies with the president. One man raised a concern with him about what he said was some were having trouble getting something from FEMA. Trump immediately asked him to bring these individuals up to him.

From the relief center, Trump continued on to First Church in suburban Pearland. On the trip over to the church people were seen waving, taking photos, and waving American flags as the motorcade passed by. Hand drawn signs with messages of “Thank you Trump” and “We love Trump” were seen as the motorcade arrived in Pearland.

Trump gave brief remarks at the church alongside the Texas Governor, Sen. Ted Cruz, and several others that made the trip with Trump from Washington, D.C. The President commented on the day of prayer that is designated for Sunday. He lauded Gov. Abbott and several of those on stage for efforts not only in the aftermath of the hurricane, but for accomplishments in their respective positions in the Trump Administration. 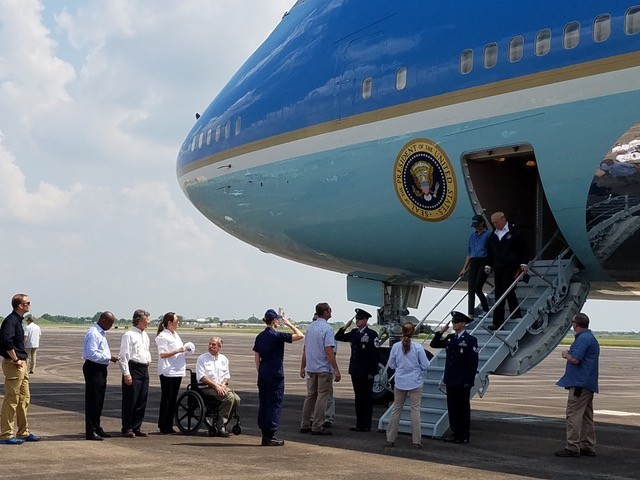 President Trump is scheduled to continue on from Texas to Louisiana later in the day to meet with members of the Louisiana Delegation and then members of the county emergency operations center, National Guard, and Cajun Navy.