Sheriff Lombardo clarified that previous reports on the timeline of events were based on CAD (computer aided dispatch) reports and have been updated after officials conducted a thorough review of body cameras. 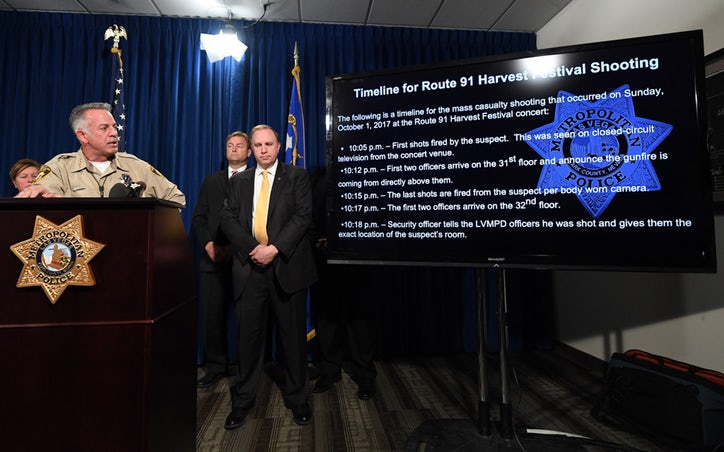 The following timeline was displayed on a screen during Wednesday’s press conference:

10:05 p.m. — First shots fired by the suspect. This was seen on closed circuit television from concert venue.

10:12 p.m. — First two officers arrive on the 31st floor and announce the gunfire is coming from directly above them.

10:15 p.m. — The last shots are fired from the suspect per body worn cameras.

10:18 p.m. — Security officer tells the LVMPD officers he was shot and gives them the exact location of the suspect’s room.

10:26-10:30 p.m. — Eight additional officers arrived on the 32nd floor and begin to move systematically down the hallway, clearing every room and looking for any injured people. They move this way because they no longer hear the gunfire of an active shooter situation.

10:55 p.m. — Eight officers arrive in the stairwell at the opposite end of the hallway nearest to the suspect’s room.

11:20 p.m. — The first breach was set off and officers entered the room. They observed the suspect down on the ground and also saw a second door that could not be accessed from their position.

11:27 p.m. — The second breach was set off allowing officers to access the second room. Officers quickly realized there was no one else in the rooms and announced over the radio that the suspect was down.

The sheriff updated the numbers of those killed and injured in the mass shooting as 58 and 489, respectively. This does not include Stephen Paddock, who was found dead in the 32nd-floor Mandalay Bay hotel room. “Of the 489, 317 have been discharged from the hospital,” said the sheriff.

He clarified that early numbers of injured in excess of 500 included some people at the hospital for events unrelated to the attack and some victims of the attack who were double counted in the aftermath as victims were sent to multiple hospitals.

Sheriff Lombardo responded to reporters’ questions about what appeared to be a yellow note in a photo of the hotel room that was leaked to the press. Lombardo said definitively that it was not a suicide note and that no suicide note has been discovered as of the time of Wednesday’s press conference. He added that it appeared that the suspect may have wanted to survive his attack and escape authorities.

Lombardo added that Paddock appeared to be living a secret life and had spent decades acquiring ammunition and weapons. The sheriff called the attack “meticulously planned” and that Paddock’s motive is still unknown.

Paddock also previously rented a room at the Ogden through Airbnb during, and overlooking, the Life is Beautiful festival that occurred shortly prior to the Route 91 Harvest festival that was attacked on Sunday. Sheriff Lombardo said on Wednesday that law enforcement has recovered video from that time at that hotel to review Paddock’s actions while he was staying at the Ogden.

The sheriff said there will still be more interviews to conduct and that it could take up to five days to evaluate the crime scene. He added that, while there were two cameras on a room service cart outside Paddock’s room as well as the door peephole and inside the general family area of the hotel room, none of those cameras were recording.

Lombardo also told reporters that Paddock had 50 pounds of Tannerite as well as ammonium nitrate and 1,600 rounds of ammunition in his vehicle at the Mandalay Bay hotel.