GWADAR, PAKISTAN — While the United States enters a low period in its relationship with Pakistan, China is quietly but steadily building goodwill in the country — symbolized by a gleaming new port it helped build in the southern city of Gwadar.

Set against soaring white cliffs and the sparkling blue sea, the Gwadar Port feels like it’s located somewhere in the Mediterranean, not Pakistan. 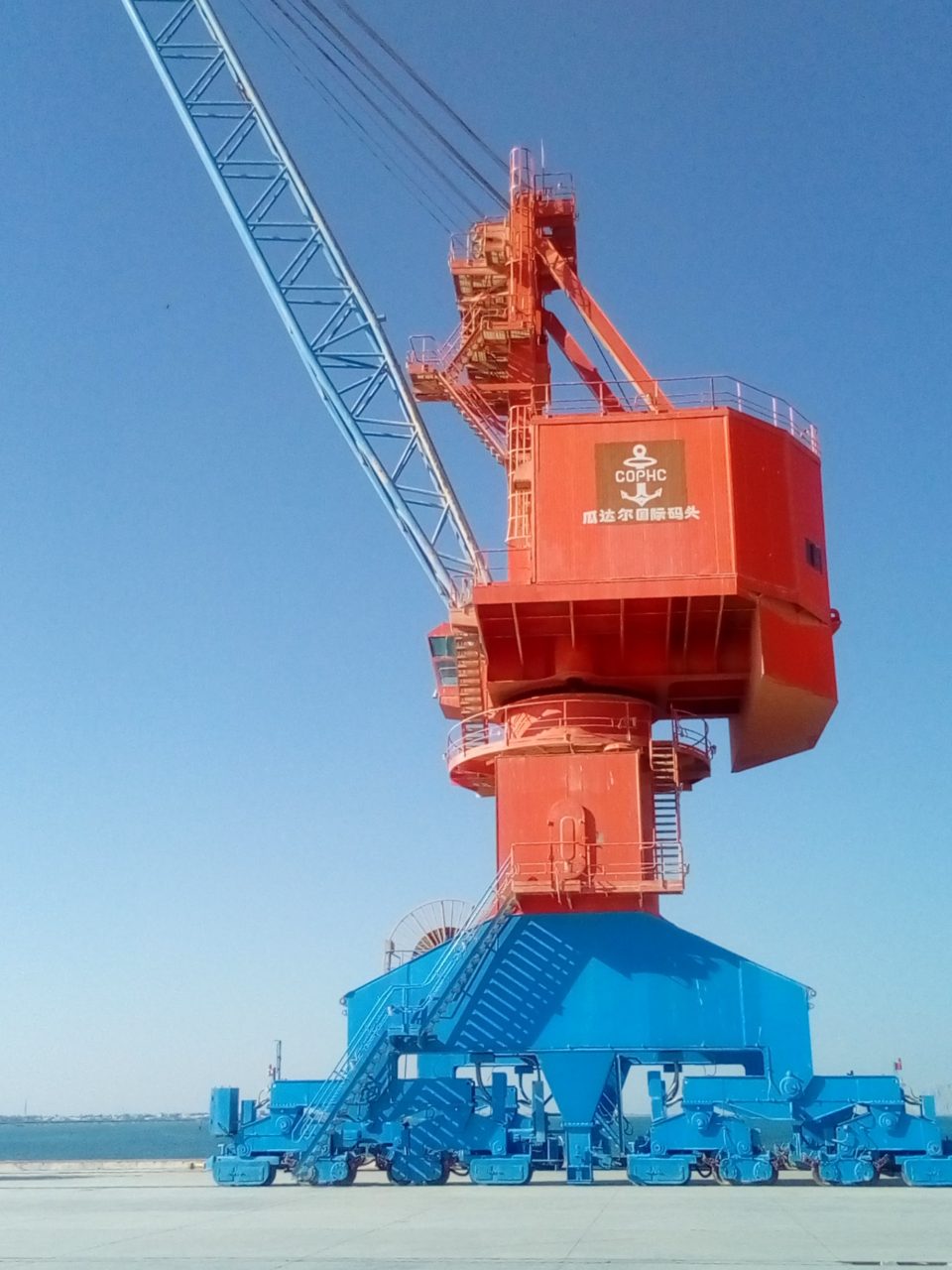 In March, Breitbart News and several other U.S. journalists were invited by the Pakistan government to view the port, and other signs of the country’s economic progress.

The port and four square miles of land have been leased to China until 2059, to set up tax-free businesses and build an economic free zone.

It’s not just the port that China has helped build in Gwadar. There is also a lavish business center nearby. The white marble-floored lobby features a giant map of the world — minus the Americas — with China and Pakistan highlighted in red and black respectively.

The center was built in five-and-a-half months by Chinese foremen, Pakistani engineers, and with millions of dollars of Chinese investment.

There’s also a vocational training center, a 300-bed hospital, and a school. There are plans to build an international airport and a power plant. 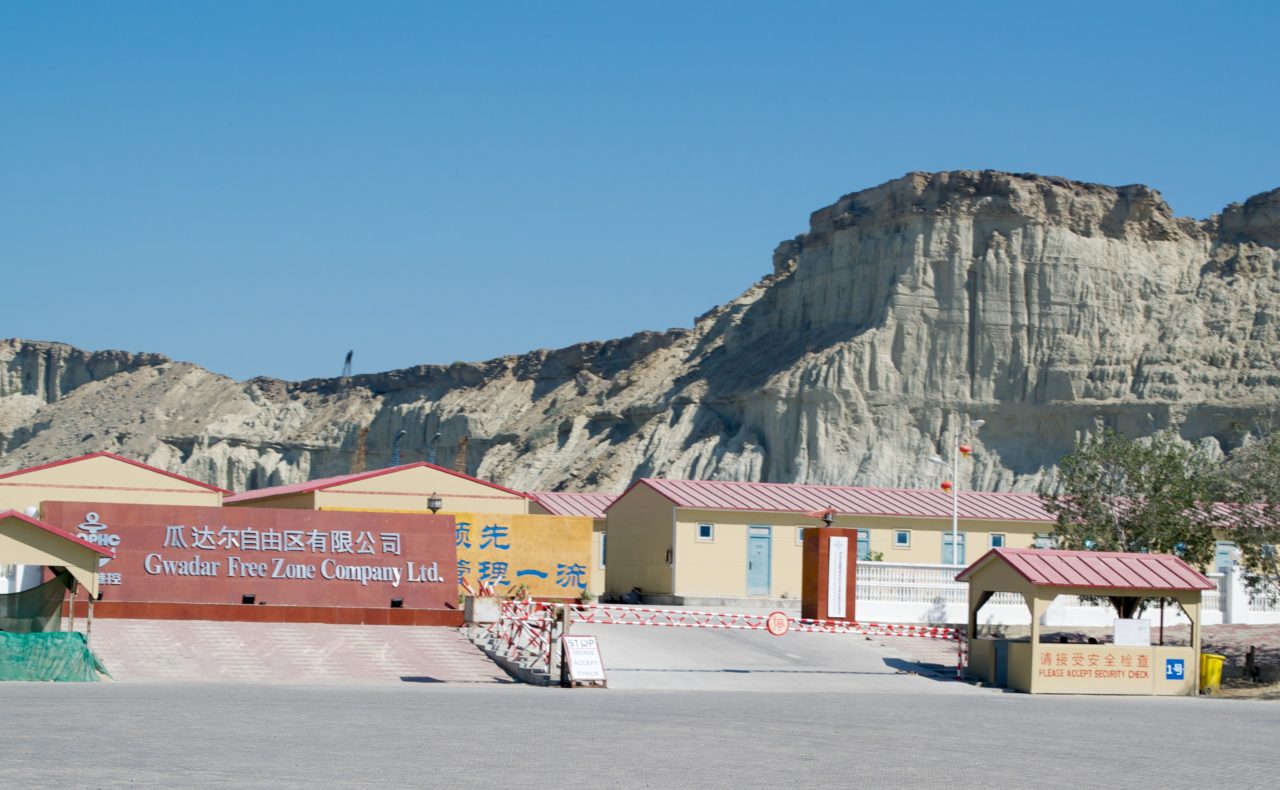 Pakistan and China hope to set up an economic free zone in Gwadar. (KRISTINA WONG/BREITBART NEWS)

The projects are part of Pakistan and China’s $46 billion plan to develop a land corridor from the western China, down through Pakistan, and all the way to the Arabian Sea, known as the China-Pakistan Economic Corridor, or CPEC.

Pakistan’s leaders are hoping CPEC will transform Pakistan’s economy into a regional trade hub, create some 700,000 jobs, and boost its growth rate. So far, 55 CPEC projects have been completed, ranging from energy, infrastructure, agriculture, and tourism.

The plan appears to be having some effect. Two years ago, there were two flights a week from Karachi, Pakistan’s largest city, to Gwadar. Now, there are two flights a day, according to Zhang.

This is happening while U.S. and Pakistan have hit a rough spot in their relationship.

In January, President Trump cut security assistance to Pakistan by more than $300 million, and tweeted on New Year’s Day, “The United States has foolishly given Pakistan more than 33 billion dollars in aid over the last 15 years, and they have given us nothing but lies & deceit, thinking of our leaders as fools. They give safe haven to the terrorists we hunt in Afghanistan, with little help. No more!”

The United States has foolishly given Pakistan more than 33 billion dollars in aid over the last 15 years, and they have given us nothing but lies & deceit, thinking of our leaders as fools. They give safe haven to the terrorists we hunt in Afghanistan, with little help. No more!

The cutting of aid is part of the administration’s plan to increase pressure on Pakistan to stop providing safe haven for the Taliban and other terrorists engaged in the Afghanistan War. U.S. officials blame Pakistan for allowing terrorists to launch attacks in Afghanistan and escape into its borders.

Pakistan officials say they are not providing safe haven to terrorists, and argue they have limited reach in the semi-autonomous border region between Afghanistan and Pakistan. They also point to a major counterterrorism operation they have been waging against terrorists since 2014, and say they are going after those who attack in Afghanistan and Pakistan.

“You kick me, you push me out of the room. Where do I go?” said a senior Pakistan official who spoke to reporters on background. “So more than we going to China, I think U.S. is pushing us faster, harder because we are children of lesser god. That is how U.S. can treat its lifelong ally.”

China appears to be taking advantage of Pakistani grievances.

Zhang, dressed entirely in Pakistani local attire, said he is not a politician but talks in platitudes that exhibit China’s soft power approach to its partners. He said the Chinese and Pakistanis have a lot in common. Both, he said, “are humble, hardworking, and peace-loving people.”

“We feel our culture is very similar to Pakistani culture. We believe it is our duty, that we should help Pakistan,” he said. “Pakistan really sacrifice a lot because of terrorism. Poverty is the root of terrorism,” he said. “If people enjoy good life, why they go to terrorism?”

He compared Pakistan to a “good boy” who does “good things” and should not be punished. “You have to encourage them in the right direction,” he added. 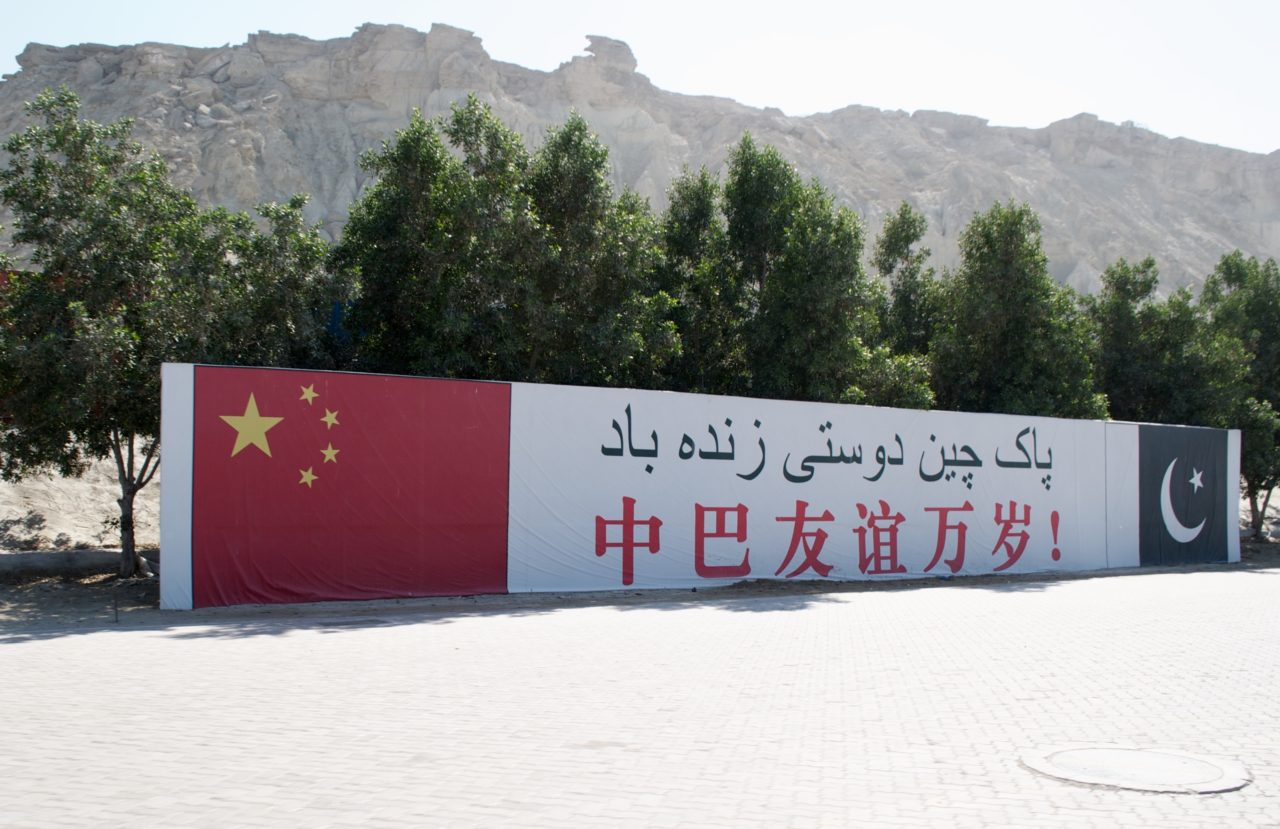 The new alliance between Pakistan and China is evident everywhere. (KRISTINA WONG/BREITBART NEWS)

Of course, the projects are more than just good will for China.

CPEC is also a key part of China’s overarching plan, called the “One Belt One Road” initiative, to build multiple land routes from China throughout the Eastern hemisphere, and at the same time, a “Maritime Silk Road” from Southeast Asia to the Mediterranean Sea. The two would link at Gwadar Port.

CPEC would also give China, now the world’s largest oil importer, a shorter and cheaper route to the Middle East. The current routes, through the Sea of Malacca and the South China Sea, are almost twice as long and vulnerable to interruption by foreign navies.

Gwadar Port sits in the strategically significant Arabian Sea, near the mouth of the oil-rich Persian Gulf.

CPEC will also link China’s underdeveloped west to the Gwadar Port. And the port could also give China a potential military naval base in the future, although Zhang laughed when asked if there were any Chinese military ships at the port. 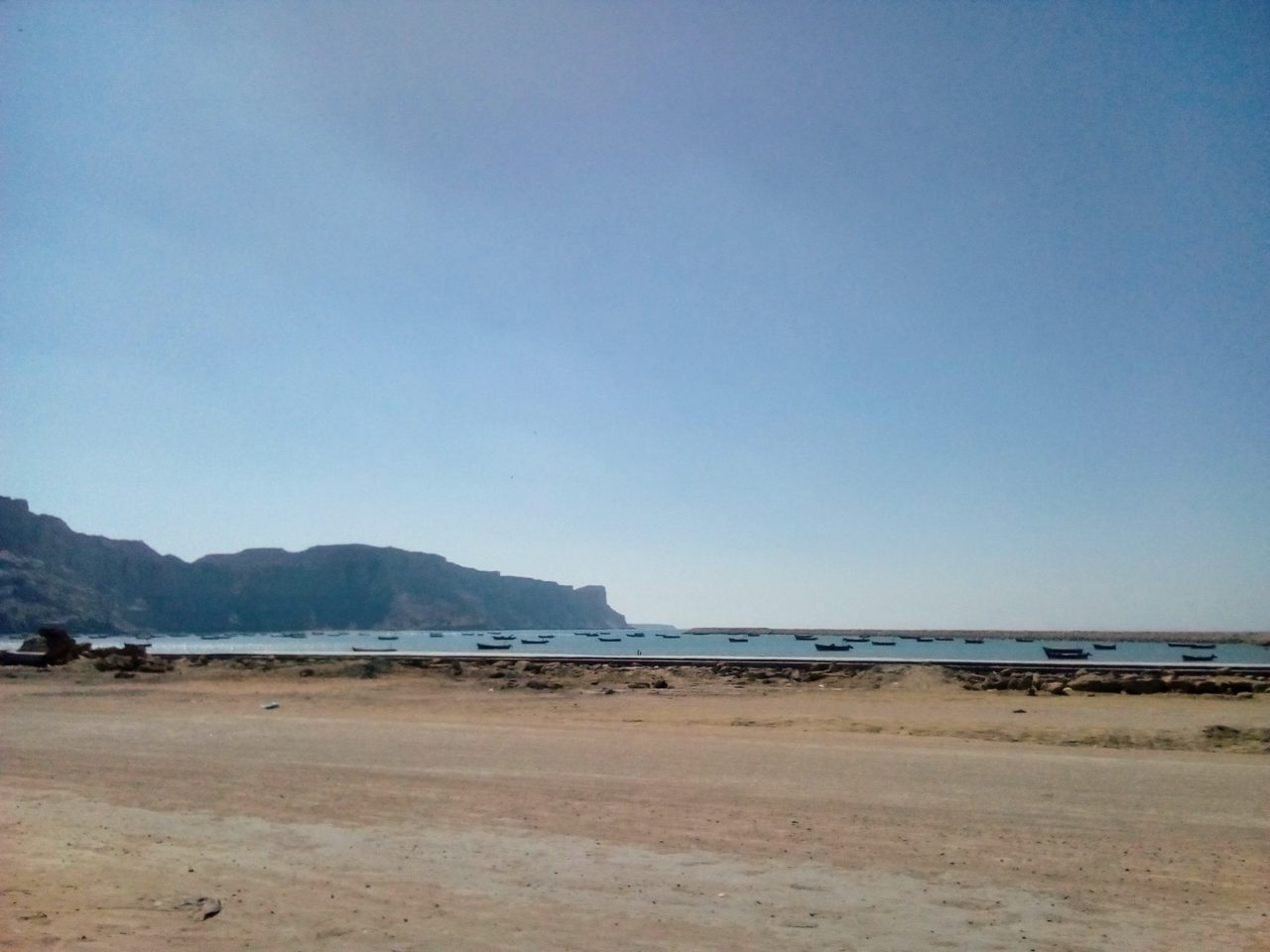 The growing ties between China and Pakistan have not escaped Washington’s attention.

The congressionally-appointed U.S.-China Economic and Security Review Commission held a hearing in January on the One Belt One Road initiative, a portion of which discussed China’s growing ties with Pakistan and implications for the U.S.

“We will have to deal with the fact that greater Chinese presence is going to be a fact rather than expecting that we’re always going to be able to counter it,” Andrew Small, Senior Transatlantic Fellow at the German Marshall Fund of the United States, testified.

Some Pakistani officials feel caught in the middle.

“Now, in our region, we feel that great power rivalry has been aggravated in Asia,” said the senior Pakistan official. “Why is the U.S. doing this? Declaring China and Russia as revisionist states? Making it public? Why do you want to create enemy? Why do you want to compete? Why can’t you cooperate?”

Others favor turning to China.

“There is a big transformation taking place,” said Sen. Mushahid Hussain Sayed, chairman of the Senate Standing Committee on Defence. A calendar featuring Chinese President Xi Jinping sat on his desk. “The U.S. is losing clout.” 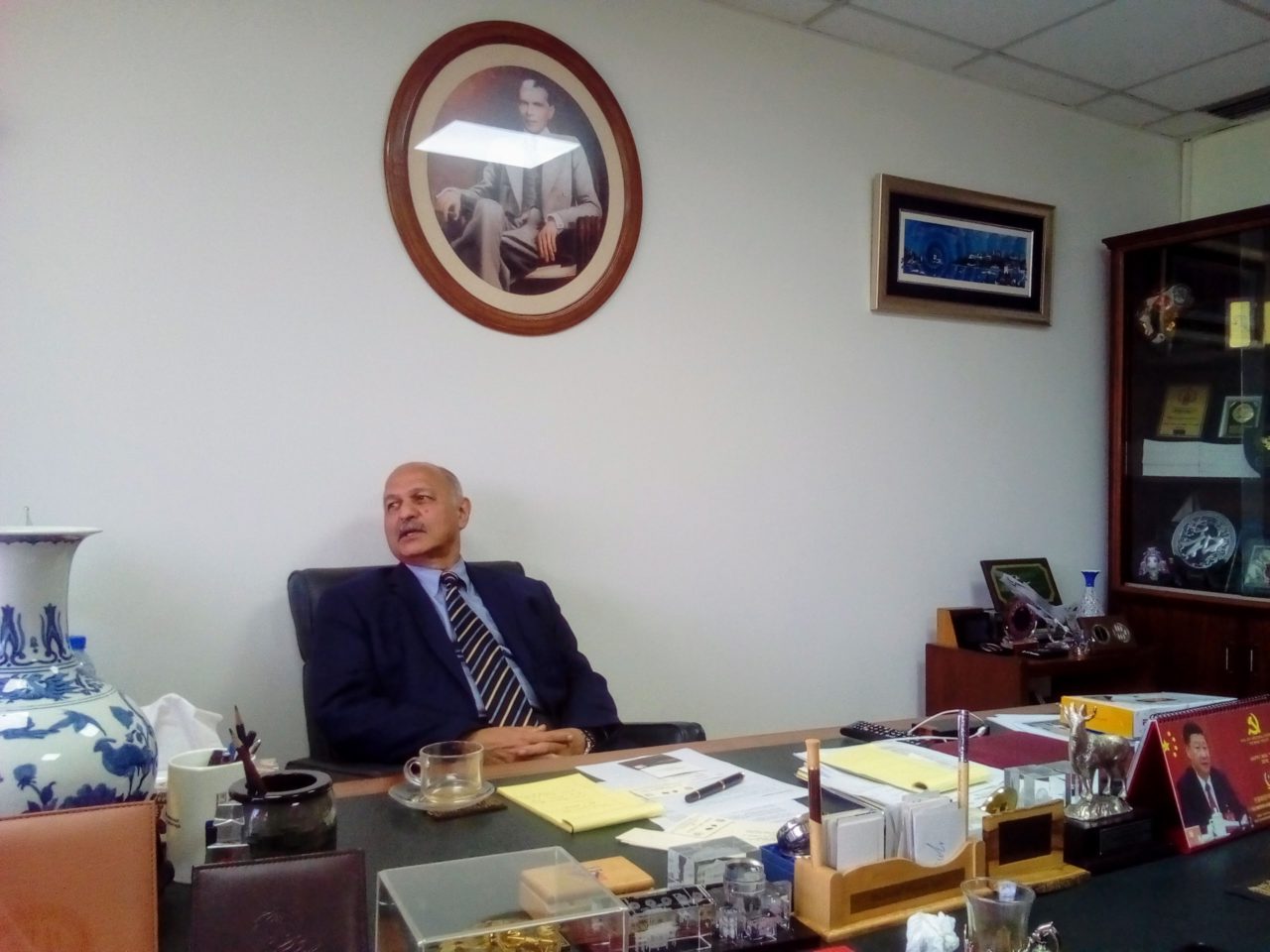 Despite the increasing ties with China, most Pakistani officials hope the relationship with the U.S. will improve. There is also some trepidation over putting all their “eggs in the Chinese basket,” according to one Pakistan expert who spoke to reporters on background.

China helped Sri Lanka build a port, but when the country could not repay Chinese loans, it was forced to lease the port to China for an excessive 99-year term.

Indeed, the South Asia Terrorism Portal shows that deaths caused by terrorism have decreased since 2014, after the country began cracking down on terrorists in Operation Zarb-e-Azb. However, in May 2017, two Chinese citizens were abducted and later killed in Quetta, Baluchistan.

Zhang said so far, security in Gwadar has been fine. He said he relies entirely on Pakistan for security. “They give me protection. I make an investment,” he said.

To date, there have been investors from Malaysia, Tunisia, Indonesia, Singapore, and Saudi Arabia in Gwadar. Zhang encouraged the U.S. to invest in Gwadar as well. “Bring a brand. Bring one good brand,” he said.