After Johnson’s case was brought to his attention by reality TV superstar Kim Kardashian West, Trump commuted her sentence.

This was the scene Wednesday as Johnson was released.

“First of all, I want to thank my Lord and Savior, thank Jesus Christ. Without him, I can do nothing. With him, I can do everything,” she said. “I want to thank President Donald John Trump. Hallelujah!,” she added, as the crowd around her cheered at the sound of the president’s name. “Thank you for giving me another chance at life and restoring me to my family.’

Johnson, who is now 63, had been serving a life sentence in a federal prison in Aliceville, Alabama, since 1996.

According to Mic, the outlet that first publicized Johnson’s story, which in turn got the attention of Kardashian West, “Johnson was convicted for her role facilitating communications in a cocaine trafficking operation in Memphis, Tennessee.” She was then handed a sentence of life with no chance of parole, plus another 25 years.

This was Johnson’s first offense.

Once incarcerated, Johnson became a model prisoner, a playwright and minister to the other female prisoners.

There is no record of her ever having been involved in any kind of violence.

Kardashian West told the Mic that while meeting with Trump, he “really spent the time to listen to our case that we were making for Alice. He really understood, and I am very hopeful that this will turn out really positively.”

"It was the most exhilarating feeling. I wanted to jump into their arms!"

Alice Johnson speaks out to GMA about her prison release and reuniting with her family following Kim Kardashian West's appeal to President Trump: pic.twitter.com/PH9TPt1aKO

When asked if she felt she had paid her debt to society, Johnson said she felt she had “overpaid,” but did not deny committing the crimes that resulted in her 22-year imprisonment, which were quite serious: 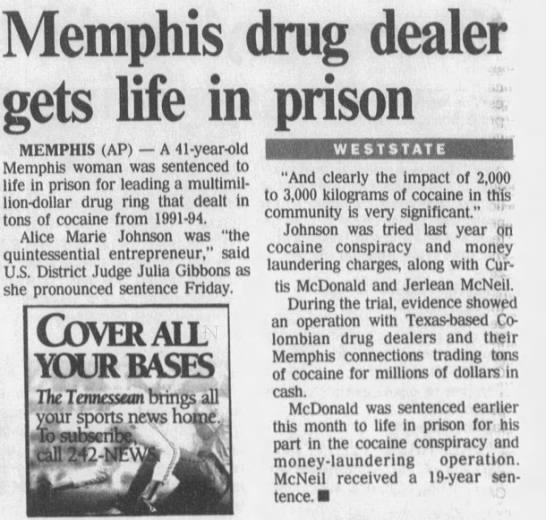 Minutes after her GMA appearance Trump tweeted, “Good luck to Alice Johnson. Have a wonderful life.”

Good luck to Alice Johnson. Have a wonderful life!