Historically, those late returns have been the difference in many elections. For that reason, Gaetz deemed his congressional district to be Florida’s “victory lane for Republicans.”

“These are God-fearing, pro-life, pro-gun folks,” Gaetz said in an interview with Breitbart News following the event. “They have delivered victories for Republicans in gubernatorial races, presidential races, U.S. Senate races, and we’re not tired of winning. And that’s why we’re going to make sure Ron DeSantis is our next governor.”

Gaetz surmised if the early tallies are close for DeSantis on the night of the August 28 Republican primary, Northwest Florida will be what pushes DeSantis over the top in his GOP gubernatorial primary contest against Agriculture Commissioner Adam Putnam.

“I just need the rest of the state to keep it close,” he added. “If the rest of the state will keep it close, we’ll deliver the win. There’s going to be high turnout here if we inspire the Trump coalition. Too many Republicans across America thing the way to win is to sort of go lukewarm on Trump, and that is a huge mistake. I’m glad that the president has endorsed Ron. I’m glad that he has endorsed me. And I have every expectation that will be the principal driver of turnout.”

The latest polling shows DeSantis with a double-digit lead over Putnam. DeSantis surged to this lead after receiving President Donald Trump’s endorsement – one Trump teased on Twitter in December and gave formally in June.

Congressman Ron DeSantis is a brilliant young leader, Yale and then Harvard Law, who would make a GREAT Governor of Florida. He loves our Country and is a true FIGHTER!

Congressman Ron DeSantis, a top student at Yale and Harvard Law School, is running for Governor of the Great State of Florida. Ron is strong on Borders, tough on Crime & big on Cutting Taxes – Loves our Military & our Vets. He will be a Great Governor & has my full Endorsement!

DeSantis told the roughly 150 people in attendance at Destin’s Cuvée Kitchen he would need their help in the general election phase of the campaign against the eventual Democratic opponent.

“As soon as that primary is over, we need to get every single person in Northwest Florida who supported the president in 2016, you need to let them know you need to show up in 2018,” DeSantis said. “This is important.” 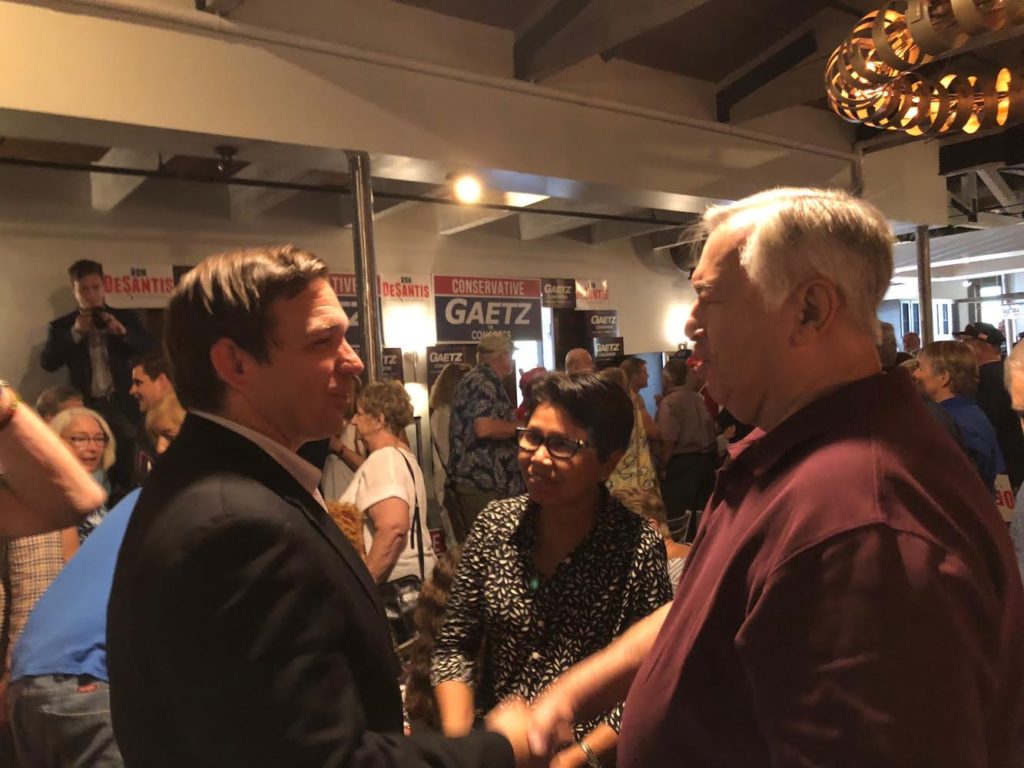 During the rally, DeSantis offered attendees his vision for Florida and some of his goals, which included pursuing a constitutional amendment that would impose term limits for members of Congress through a convention of the states.

He also vowed to make the Constitution a focus of public education in the Sunshine State.

.@RonDeSantisFL on education: “The Constitution needs to be front and center in the classroom.” #flapol pic.twitter.com/8ruEl9Oa6Q

DeSantis, Gaetz and Jordan have all been outspoken critics of the so-called deep state and its alleged efforts to derail Trump’s campaign and his presidency. Gaetz explained to Breitbart that this would be a motivational force that would encourage Republicans to vote in the 2018 election.

“Florida voters will not allow the deep state to destabilize a president that is doing so much for them,” Gaetz added. “I think impeachment is what’s really on the ballot in the 2018 election because if the Democrats win, that is what they will do. I think that as Republicans and non-Republican pro-Trump voters understand that, they’ll be more likely to turn out.” 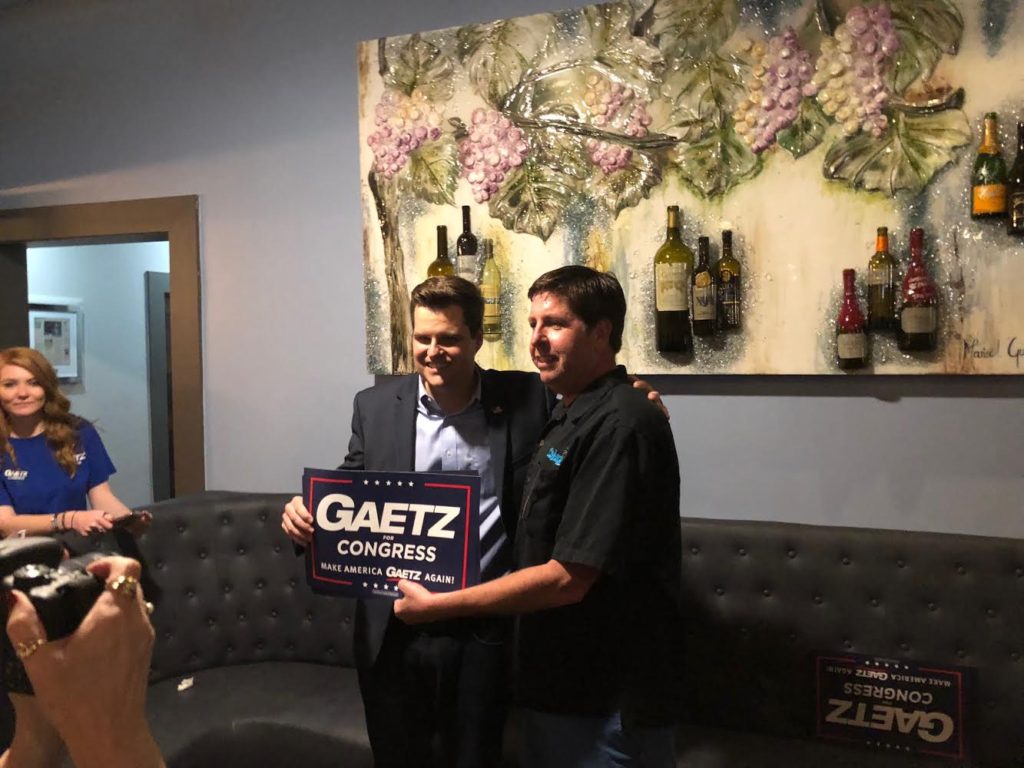 Jordan, who is a potential candidate to replace outgoing-Rep. Paul Ryan (R-WI) as Speaker of the House if Republicans can maintain their majority status, told Breitbart News he made the trip to Florida’s Panhandle to help Gaetz and said he would be making similar trips to support other candidates in the future.

Jordan acknowledged similar campaign activities would be part of his job in a leadership capacity in the House. He also said that leadership role meant fulfilling the agenda he and his Republican colleagues and President Donald Trump had offered in previous campaigns.

“That’s certainly part of the job,” Jordan said. “If we’re fortunate enough to keep the House and I’m fortunate enough to be the Speaker, that’s part of the job. But I think the main part of the job, as I said here, is doing what we said. If we’re given the chance to stay in power, stay in the majority, and I’m given the chance to lead – it’s all about doing what we said. And we haven’t done enough of that. The president has been doing his job. We haven’t been doing enough of that in the House.” 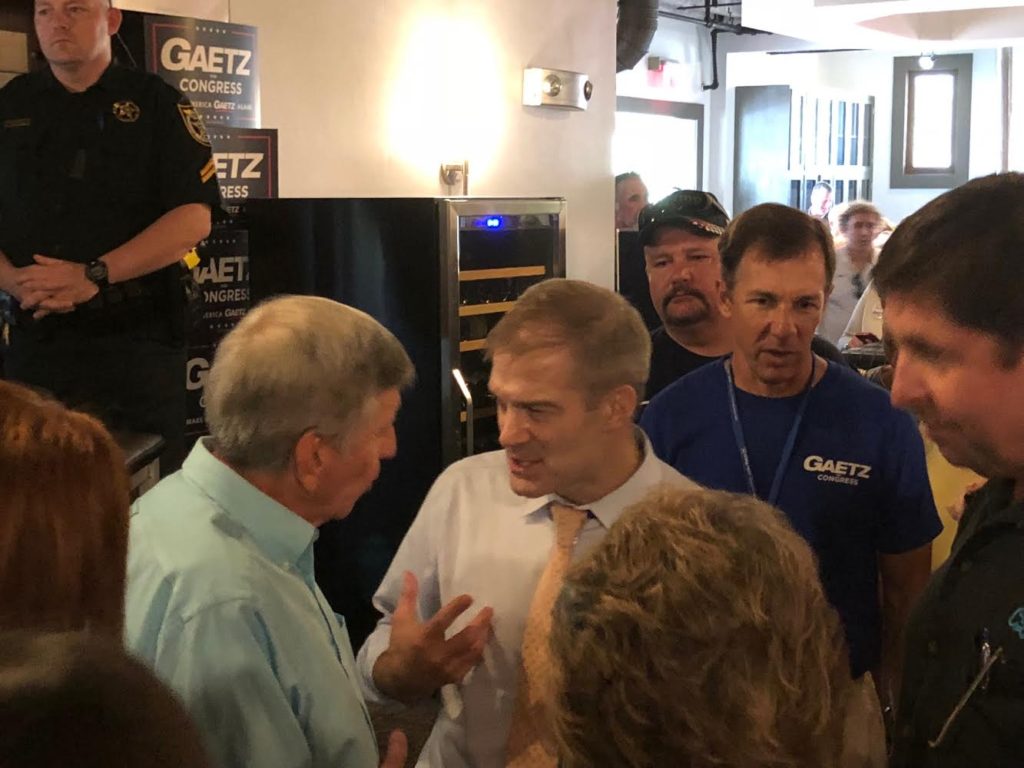 Jordan has risen to national prominence through his role as co-founder and leader of the House Freedom Caucus, which he noted DeSantis had played a role in as well.

“We started with nine guys,” Jordan said. “Ron DeSantis was one of the first ones.”

The Destin event was the third such event of the day for Gaetz, DeSantis and Jordan. The three also appeared in nearby Pensacola and Navarre.