Perhaps the most revealing moment in the week-long media extravaganza over John McCain’s death came on September 1, when Meghan McCain, daughter of the late senator, chose to use her “eulogy” to rip into Donald Trump.

Trump was absent and his name never invoked, but the entire service was animated by a sustained rebellion against the president’s worldview and his singular brand of politics.

“We gather here to mourn the passing of American greatness,” she said, gritting her teeth through the tears. “The real thing, not cheap rhetoric from men who will never come near the sacrifice he gave so willingly, nor the opportunistic appropriation of those who lived lives of comfort and privilege while he suffered and served.”

Okay, we get it: Ms. McCain hates Trump so much that she has to grit her teeth when she talks about him.  Trump and his supporters already knew that, of course. And as an aside, we might note that the good news is that in making her hatred so evident, Ms. McCain surely kiboshed any chance that Arizona Governor Doug Ducey would appoint her to fill her father’s senate seat, as some—even some who bill themselves as conservative—have suggested. 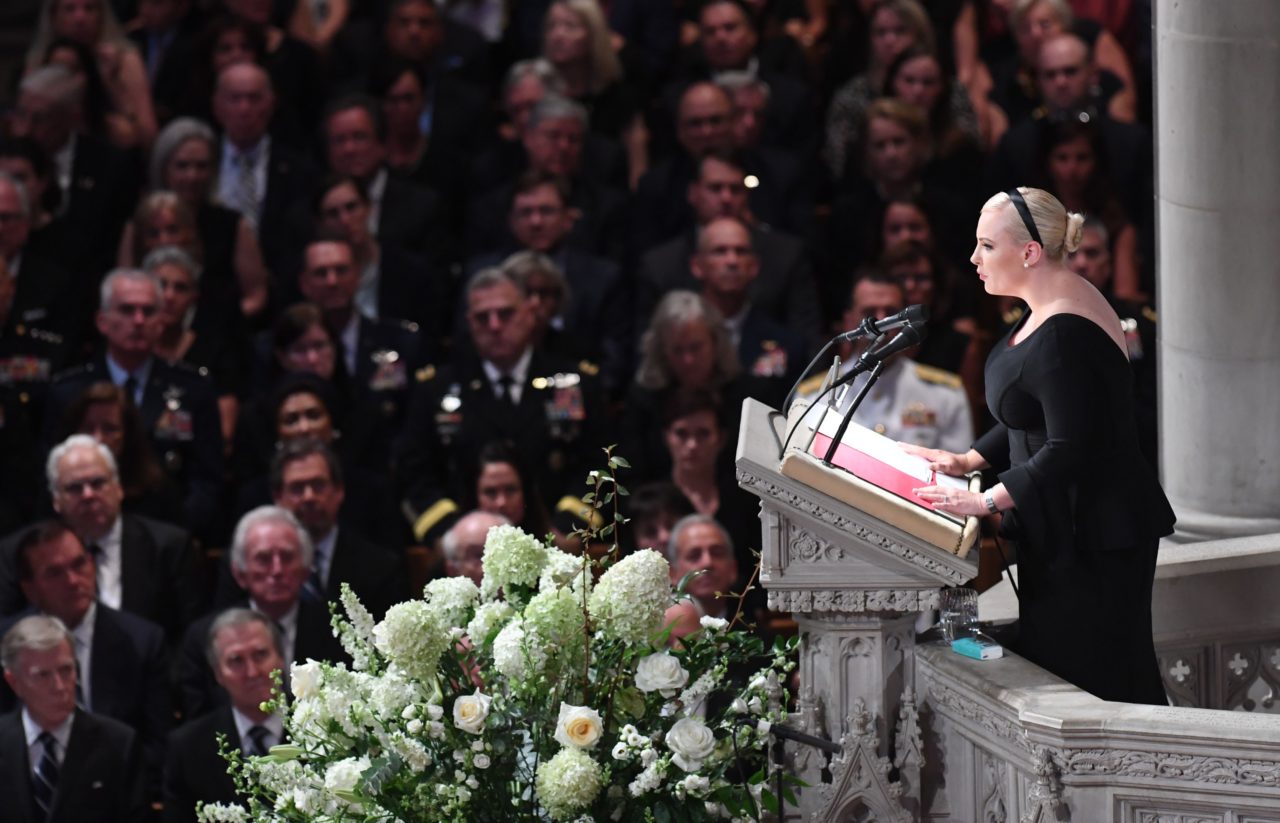 Meghan McCain speaks at a memorial service for her father at the Washington National Cathedral, September 1, 2018. (SAUL LOEB/AFP/Getty Images)

However, even if the younger McCain will never be an Arizona Republican, she can still be a Establishment Republican.  You see, she is an expert in telling the Establishment what it wants to hear—and the Establishment will hugely reward her for her “courage.”  Once again, the Post, that reliable reflector of Beltway conventional wisdom, sets the scene:

When she fiercely declared that “the America of John McCain has no need to be made great again because America was always great,” the generals, senators, former presidents and other world leaders who filled the pews burst into applause.

We might linger over those last words: “burst into applause.”  It’s worth recalling that this was supposed to be a funeral service, and yet Ms. McCain turned it into a kind of political rally for the Establishment and for what it sees as the “good old days.”  Ah, for the good old days of Barack Obama, Joe Biden, Mitt Romney, George W. Bush, and … John McCain.  The days when the Establishment, for sure, was great—or at least greatly in charge. 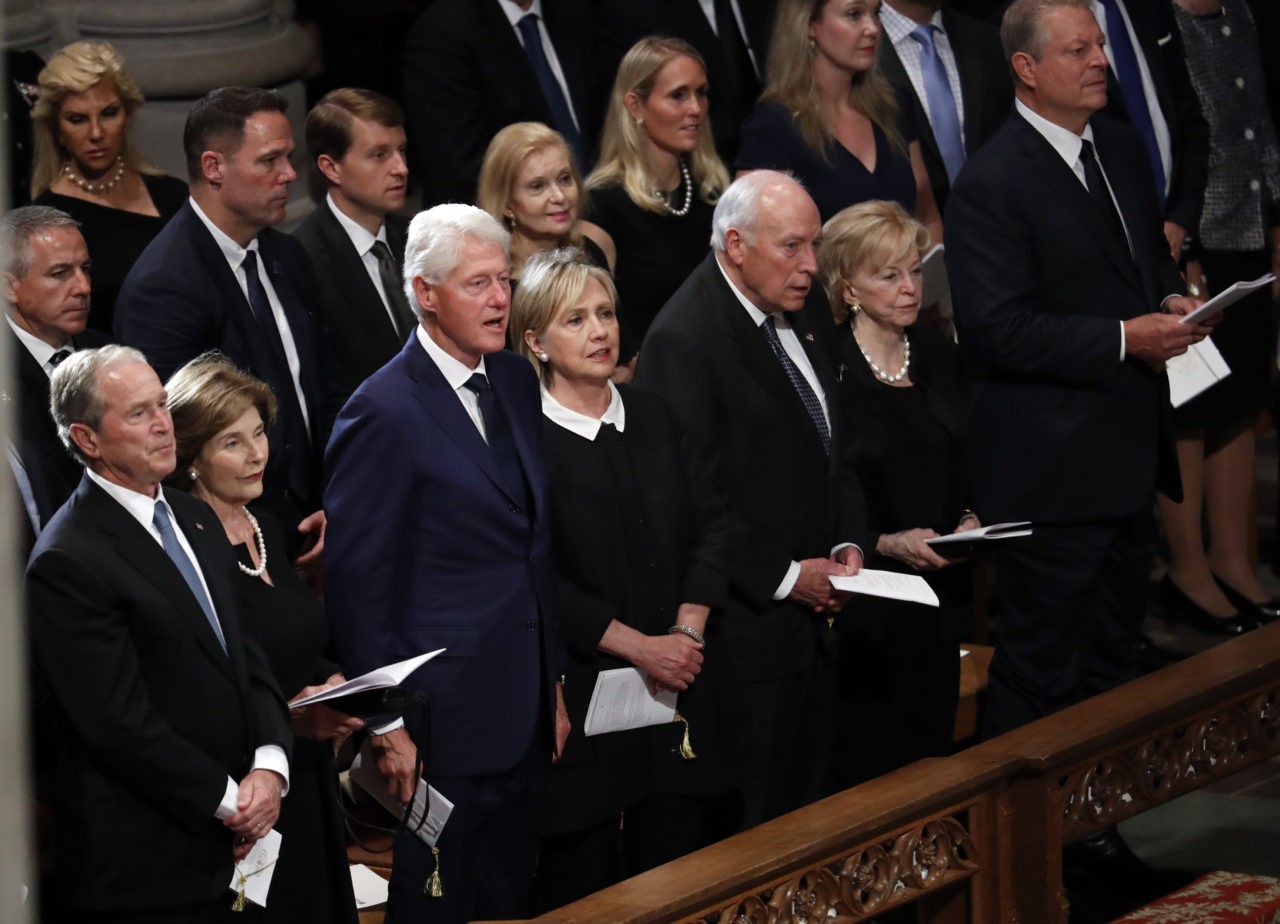 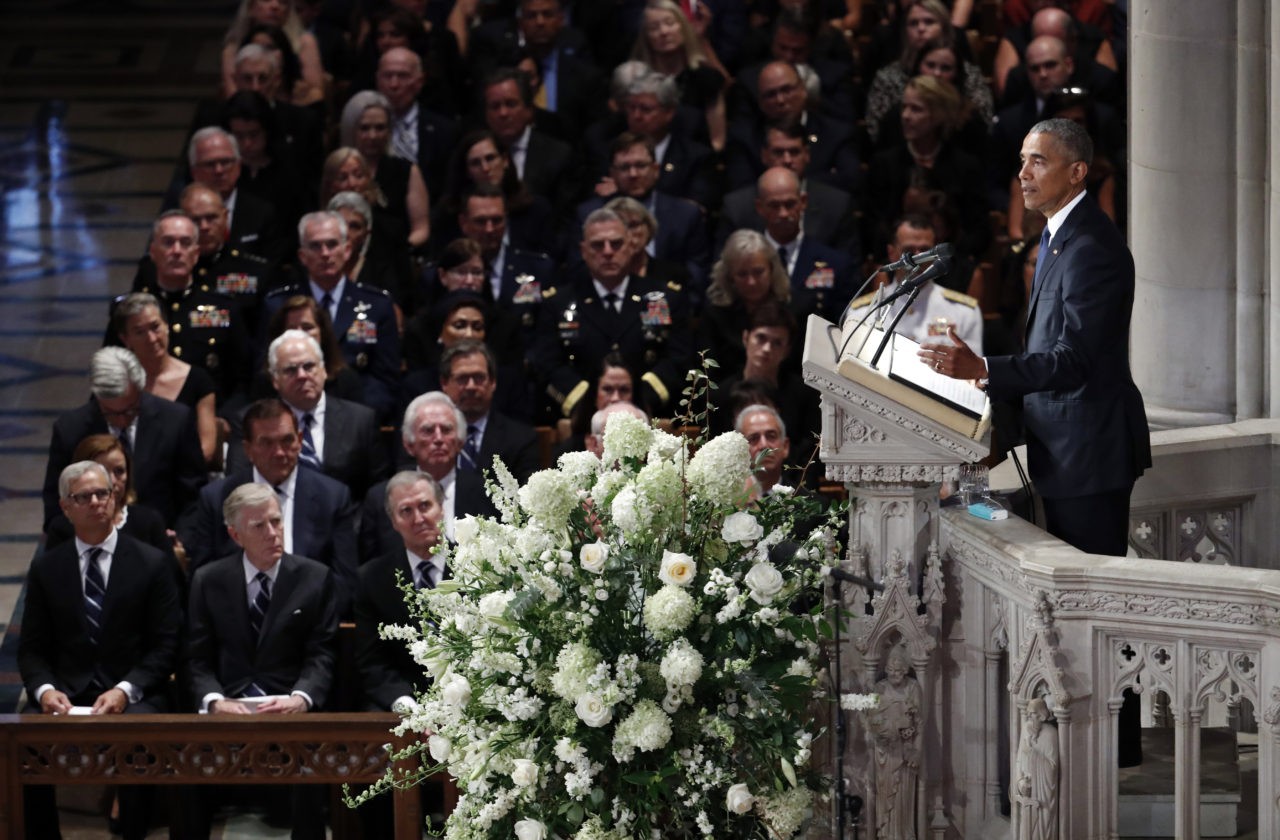 Yes, in the Establishment’s collective mentality, the good old days were the time when the U.S. border was open, when trade deals were easy, and foreign wars were being fought.

The Establishment, of course, never cared that, as a result, social chaos was increasing, wages were declining,  regions were de-industrializing, and young Heartlanders—not Establishmentarians, of course—were getting killed and maimed overseas.  So when Meghan McCain defined those days as “greatness,” well, that was what the Establishmentarians came to hear.   She was patting the big shots on the back, and they were glad for the pat.  And John McCain, of course, was the champion of that sort of Beltway bonhomie—and, especially, the bipartisan “fun” of foreign wars.

Except when he was running for re-election in Arizona, McCain made no apologies for any of his views, even as they ultimately drove down his approval rating, among Arizona Republicans, to just 20 percent—with a whopping 68 percent disapproving.  Indeed, according to another poll, McCain was the third-most unpopular Senator in the nation.

Yet to the Establishment, such unpopularity is a badge of honor; that is, if a political figure is willing to “stand up” to the dopey masses, well, that’s a good thing.  So it’s little wonder that John McCain received the John F. Kennedy “Profile in Courage” award, that annual liberal smug-fest.  And now, maybe Meghan McCain will win it, too.

Indeed, Ms. McCain won extra points with the Establishment by snubbing Sarah Palin. The former Alaska governor had been John McCain’s running mate in 2008, and had delivered what’s commonly regarded as the greatest vice presidential acceptance speech in modern memory. So if the McCain-Palin ticket lost in ’08, it certainly wasn’t her fault.

And yet to the Establishment—including the many McCain campaign staffers who now make their living on MSNBC—Palin was hopelessly deplorable. She was too much the populist and no kind of elitist. So by not inviting Palin to the service, the McCains made it clear that they wanted nothing to do with the Deplorables, now and forever. Thus we see that class warfare is alive and well within the Republican Party—assuming, that is, that the McCains still think of themselves as Republicans at all.

On Twitter, observers made smart points. For instance, Kurt Schlichter compared the McCain service to the October 2002 memorial for the late senator Paul Wellstone (D-MN).  While campaigning for re-election, Wellstone had died in a plane crash, and that was a sad thing—and yet the memorial service turned into a raucous Democratic political rally, and in the resulting backlash, the Republican candidate, Norm Coleman, won the November 2002 election.

Yet Virgil was particularly struck by a string of tweets from Michael Tracey, an independent journalist of notable independence:

This funeral was one last demonstration of McCain’s belief in “bipartisanship” for its own sake.  It almost doesn’t matter what you’re doing, as long as you’re “working together.”  Just so happens that McCain’s primary “bipartisan” initiative was endless war.

That seemed like a funeral not so much for McCain, but for an ideology which had once sustained America’s imperial hegemony, and is now on the way out.

That seemed like a funeral not so much for McCain, but for an ideology which had once sustained America's imperial hegemony, and is now on the way out.

Some of those last few words deserve a second look: “Seemed like a funeral not so much for McCain, but for an ideology which had once sustained America’s imperial hegemony, and is now on the way out.”

Tracey’s argument is that McCain-style “neoconservatism,” which can be summed up as invade the world, invite the world, is now a goner.  While the Establishment—including plenty of Democrats—loves it, most Americans don’t.

In fact, it’s not surprising that imperial grandiosity plays well in blue Washington, DC, and in New York City; after all, it’s fun to get rich and noble from imperialism.  What’s less fun is to be a legionary from some red state, slogging it out in a hostile land, all for the sake of someone else’s ideological empire. 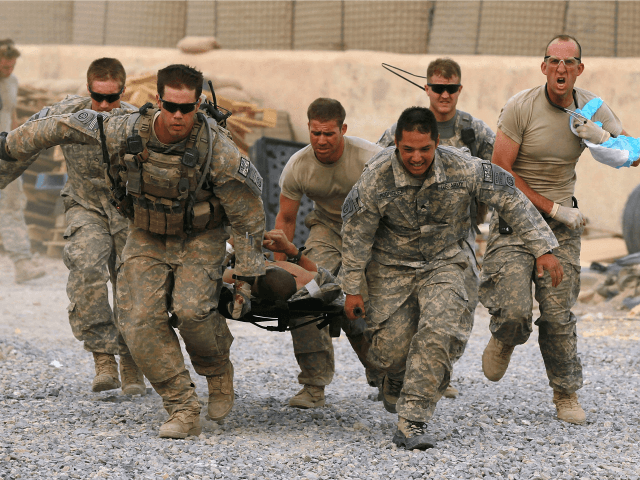 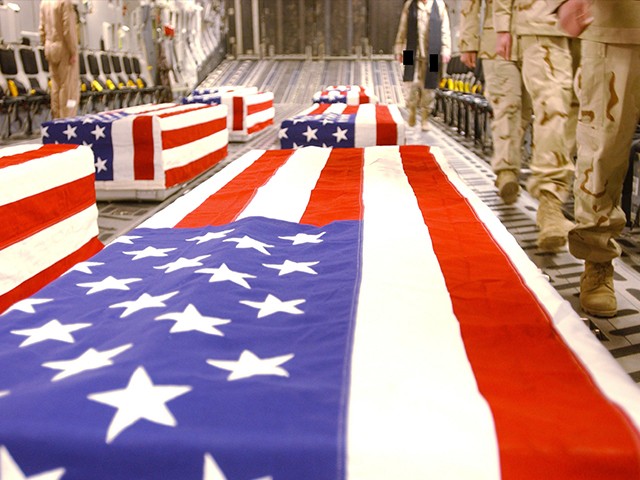 The remains of U.S. servicemen killed in Iraq return home in the cargo hold of a transport plane, April 28, 2005. (U.S. Department of Defense/The National Security Archive) 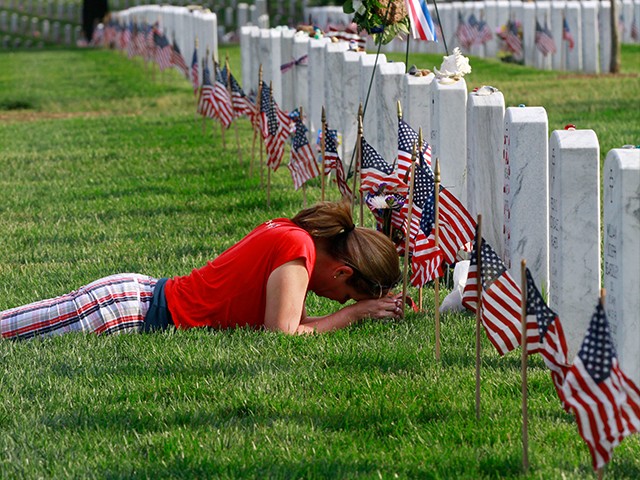 The America people, of course, have always had the power to put a stop to all this grandiose globalism, if and when they choose to exercise that power at the ballot box.

Finally, in 2016, they did.  That was the story of Donald Trump, who romped through the Republican primaries, and then to the White House.

And it was also the story of the 2016 Democratic primaries, when Sen. Bernie Sanders nearly defeated Hillary Clinton for the nomination.  (Interestingly, Sanders was also not in attendance for the McCain service, although, of course, Hillary was there; she was sitting right by another foreign-war enthusiast, Dick Cheney.)   Moreover, since 2016, there’s plenty of evidence that the populist anti-Establishment rebellion is continuing, in both parties.

So yes, Tracey has a point: The Establishment will cheer for Meghan McCain, and its handmaidens in the MSM were happy to make the whole of last week into a McCain Mediathon.  And yet at the same time, the Establishment is deathly afraid that it can’t put the old humpty-dumpty back together.  It fears that the American people won’t get fooled again; no more will they let themselves get conned by the neocons.  John McCain really is gone.

In fact, watching the McCain services, Virgil was reminded of another famed memorial service for doomed royalty—this one for real royalty, back in 1910.  In that year, Britain’s King Edward VII passed away, and all the crowned heads of Europe came to London to pay homage.  History buffs will recall that 1910 was just four years before the beginning of World War One; that disastrous conflict, of course, spelled the end of many of those royal dynasties, as well as the actual murder of Tsar Nicholas II of Russia and much of his family.  Thus Edward VII’s funeral is remembered as a kind of Indian Summer for that earlier imperial era.

Here’s how the famed historian Barbara Tuchman described the moment in her classic study of the of origins of World War One, The Guns of August:

So gorgeous was the spectacle on the May morning of 1910 when nine kings rode in the funeral of Edward VII of England that the crowd, waiting in hushed and black-clad awe, could not keep back gasps of admiration. In scarlet and blue and green and purple, three by three the sovereigns rode through the palace gates, with plumed helmets, gold braid, crimson sashes, and jeweled orders flashing in the sun.  After them came five heirs apparent, forty more imperial or royal highnesses, seven queens–four dowager and three regnant–and a scattering of special ambassadors from uncrowned countries.  Together they represented seventy nations in the greatest assemblage of royalty and rank ever gathered in one place and, of its kind, the last. The muffled tongue of Big Ben tolled nine by the clock as the cortege left the palace, but on history’s clock it was sunset, and the sun of the old world was setting in a dying blaze of splendor never to be seen again.

Those last words deserve another look: But on history’s clock it was sunset, and the sun of the old world was setting in a dying blaze of splendor never to be seen again. 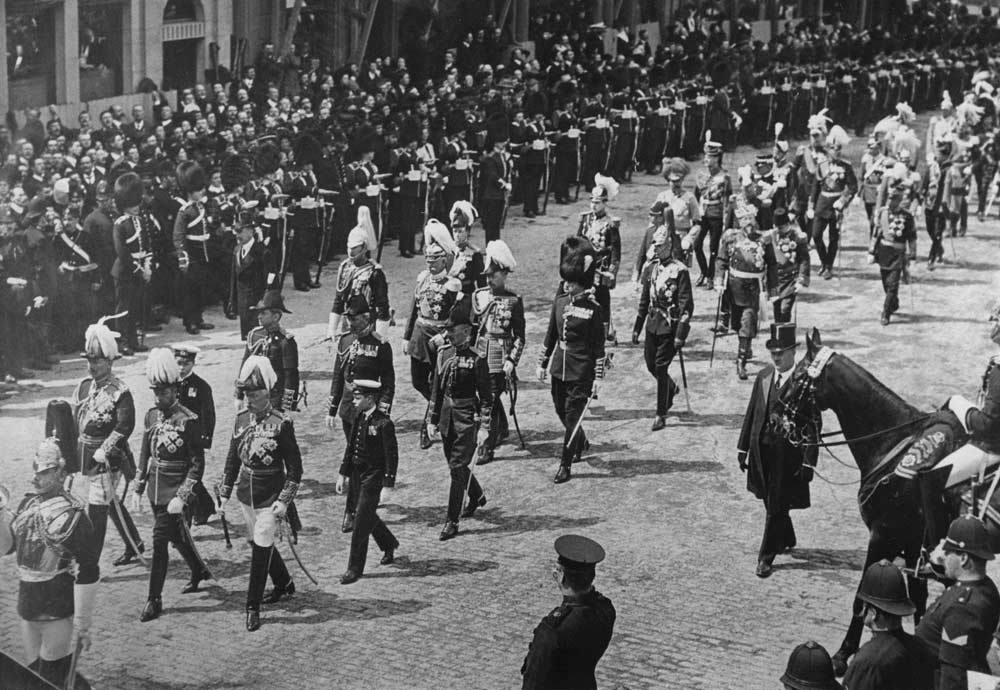 The kings and emperors of Europe march in the funeral procession of King Edward VII in London, 1910. (Getty Images) 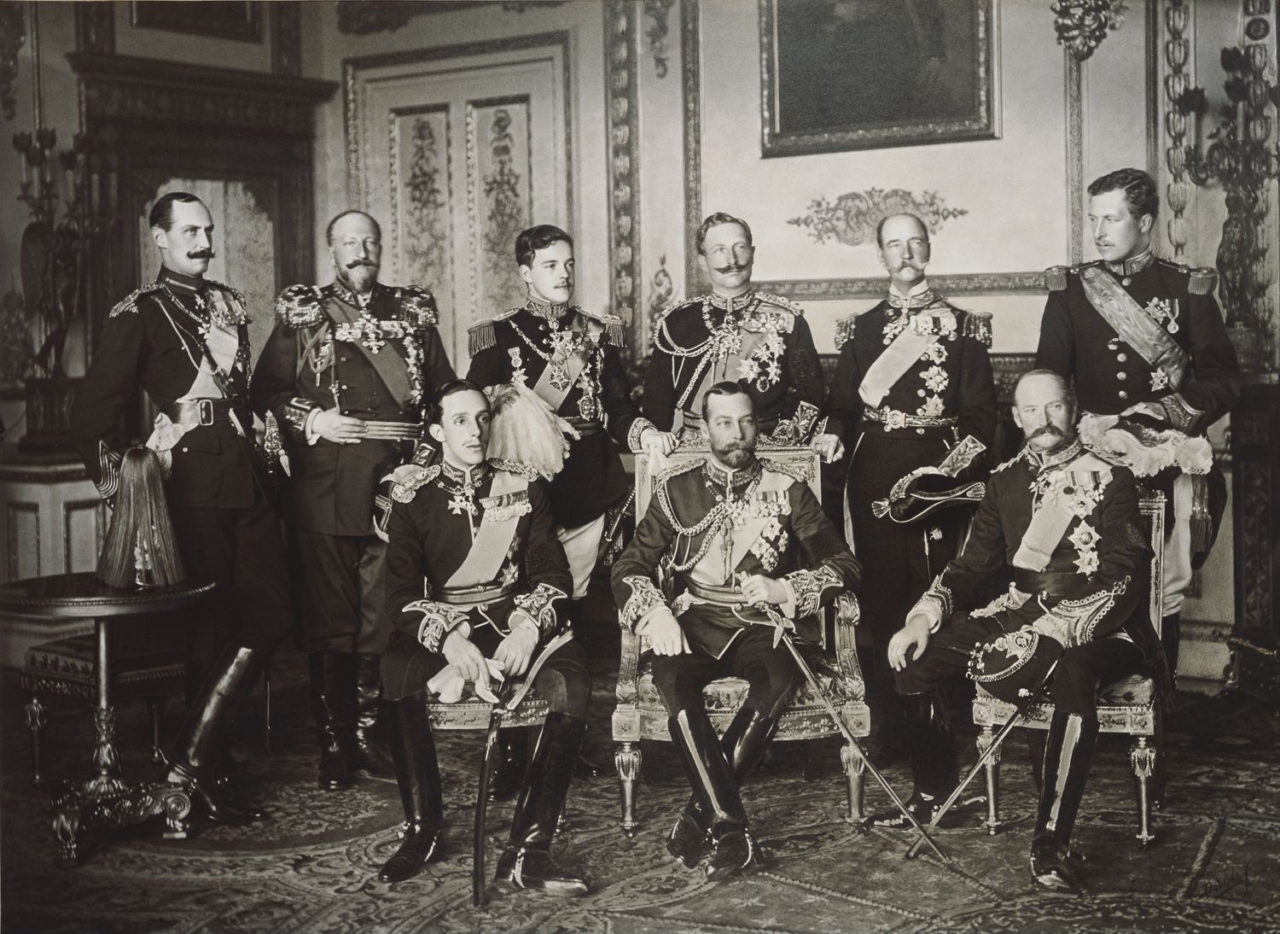 The Nine Sovereigns at Windsor for the funeral of King Edward VII. Standing, from left to right: King Haakon VII of Norway, Tsar Ferdinand of Bulgaria, King Manuel II of Portugal, Kaiser Wilhelm II of the German Empire, King George I of Greece, and King Albert I of Belgium. Seated, from left to right: King Alfonso XIII of Spain, King-Emperor George V of the United Kingdom, and King Frederick VIII of Denmark. (Wikimedia Commons)

The ceremonial pomp and circumstance of 1910 would soon be displaced by the un-ceremonial blood and mud of 1914, and 1915, and 1916, and 1917, and 1918.  By the time the Great War was over, 10 million were dead—and dead, too, was any confidence that the royals knew what they were doing, or that they were to be trusted with any sort of power.  It was the end, for sure, of that establishment. 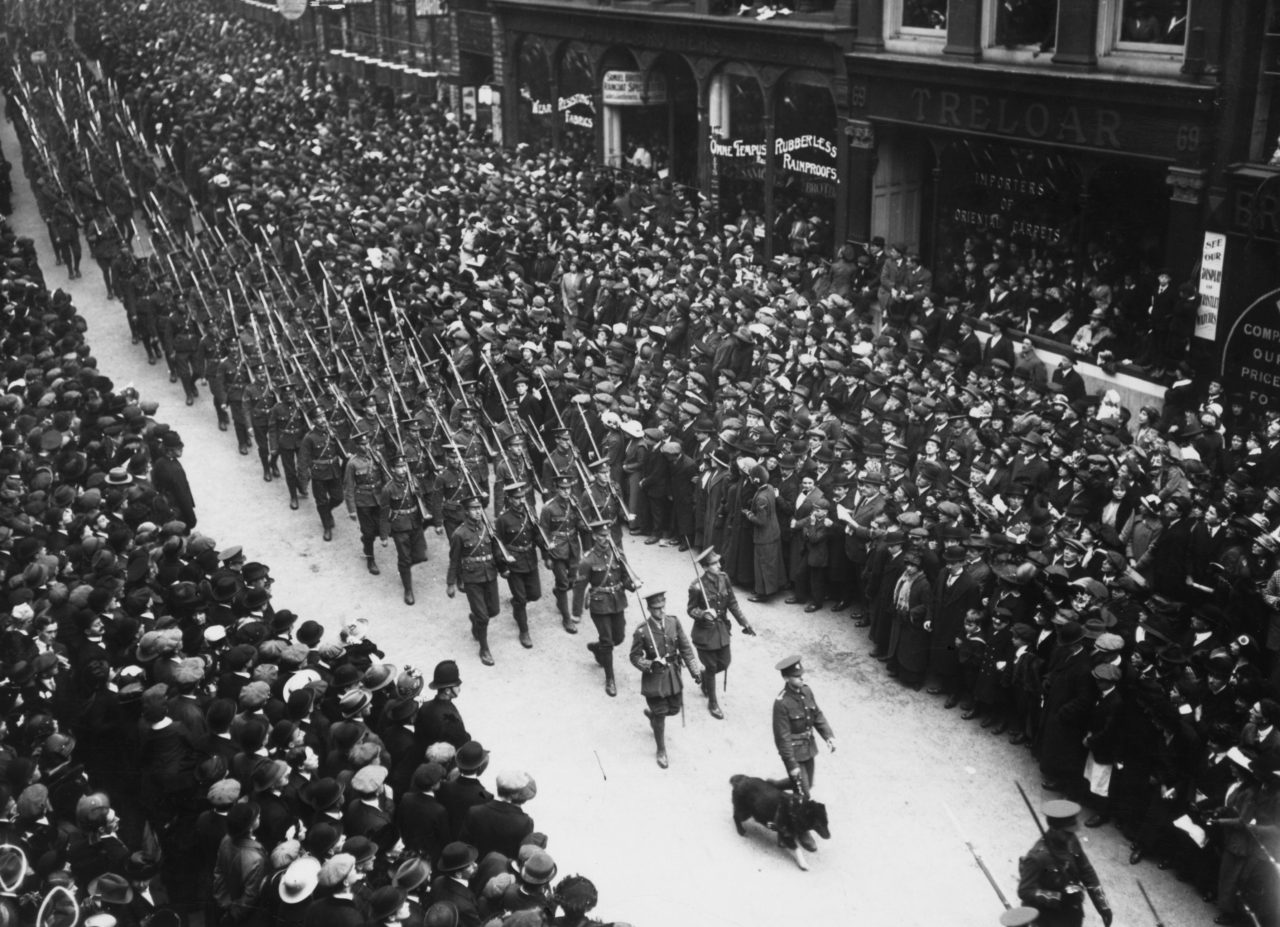 1914, Great Britain: Members of the Royal Fusiliers marching off to war at the start of World War One. (Hulton Archive/Getty Images) 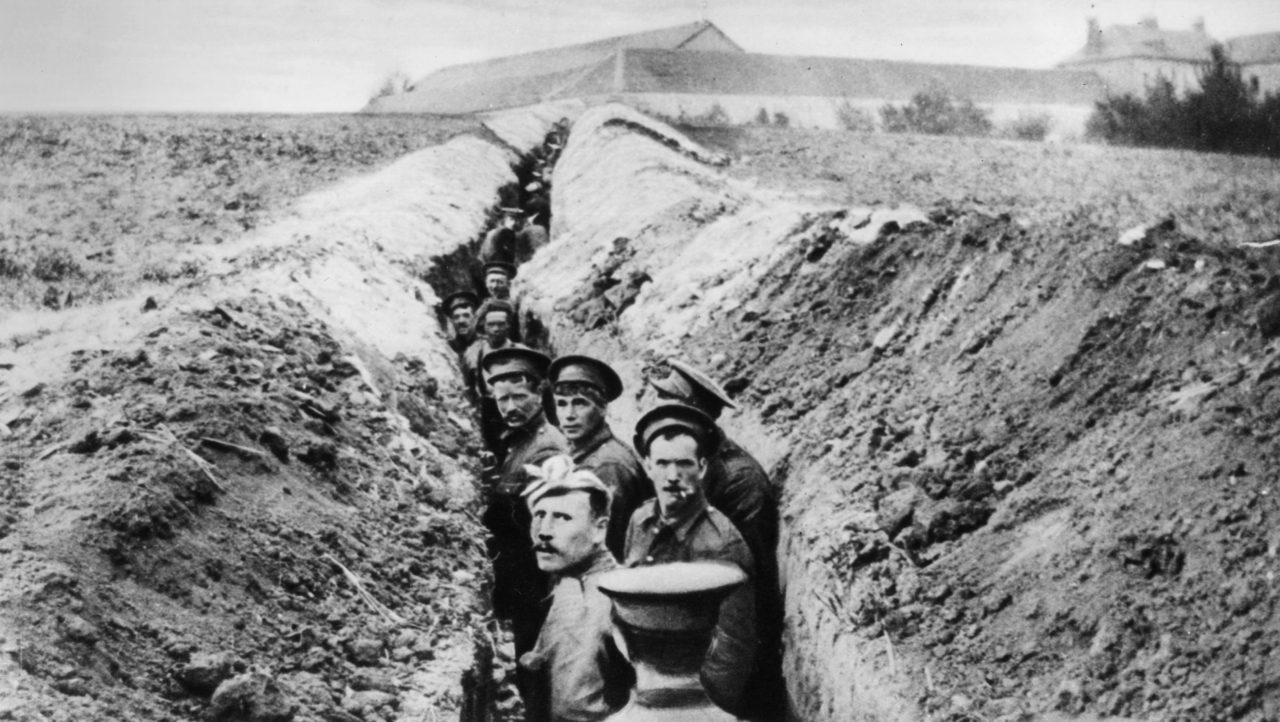 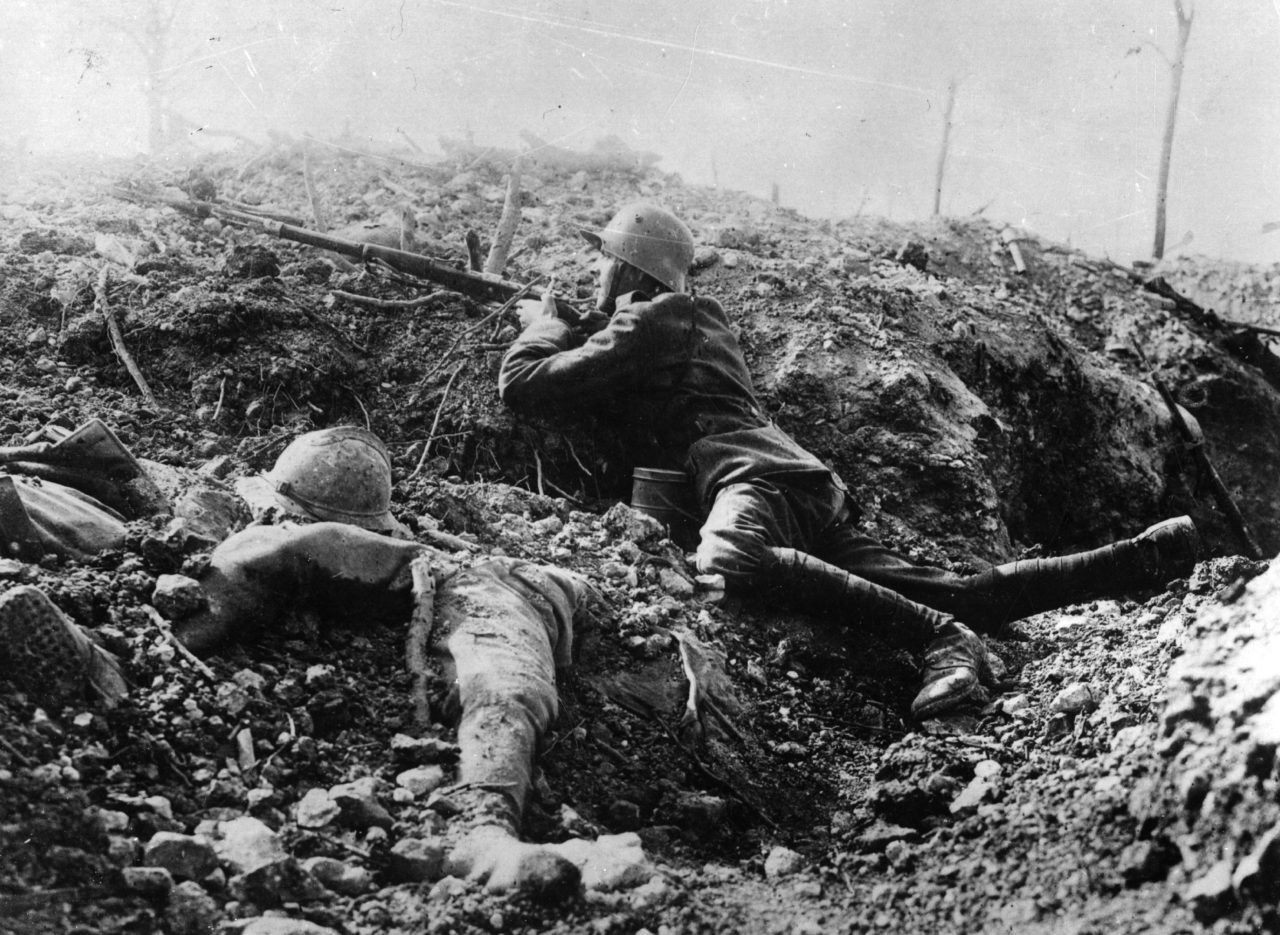 A German rifleman beside the corpse of a French soldier in a trench at Fort Vaux, France. (Hulton Archive/Getty Images) 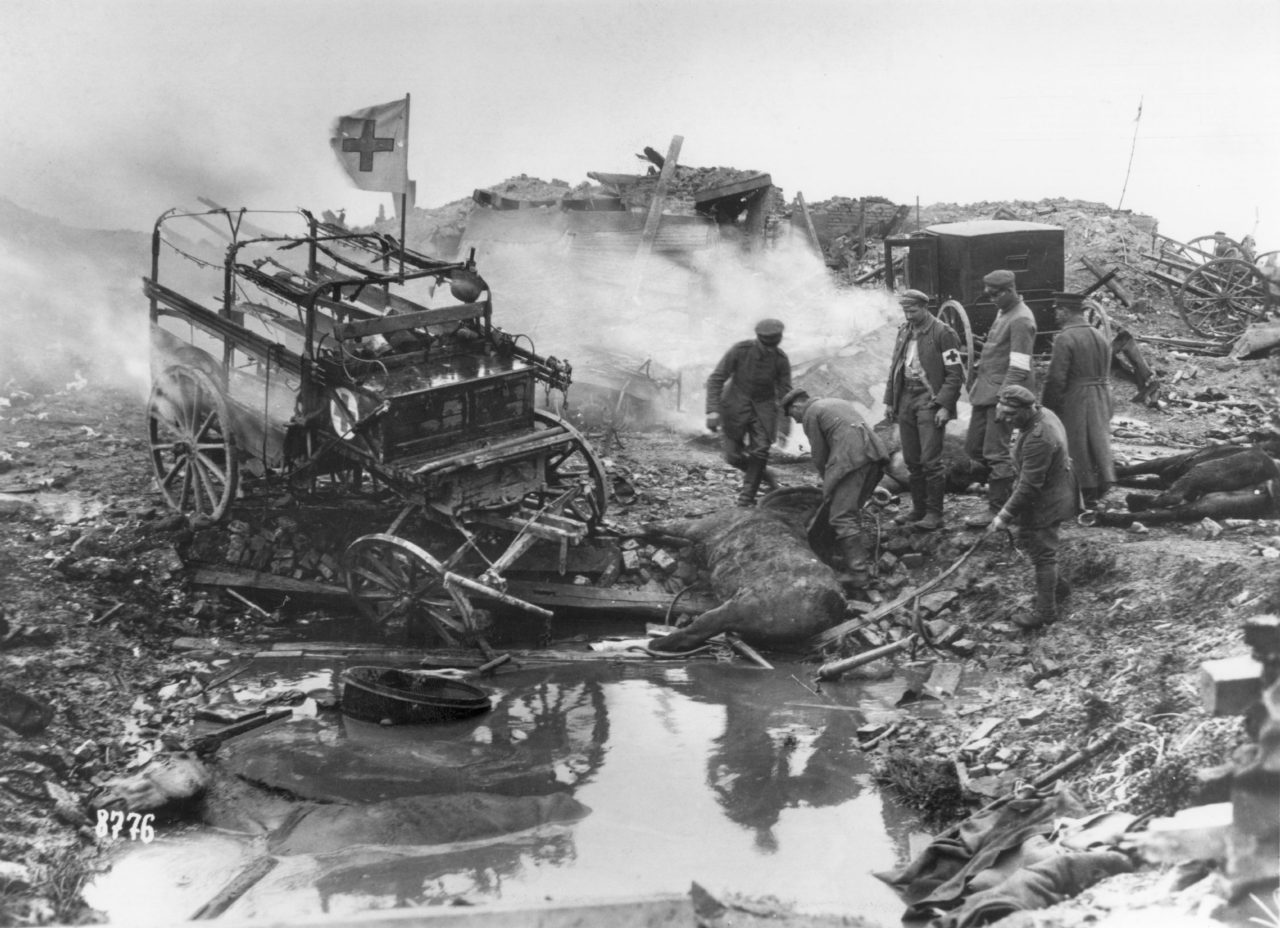 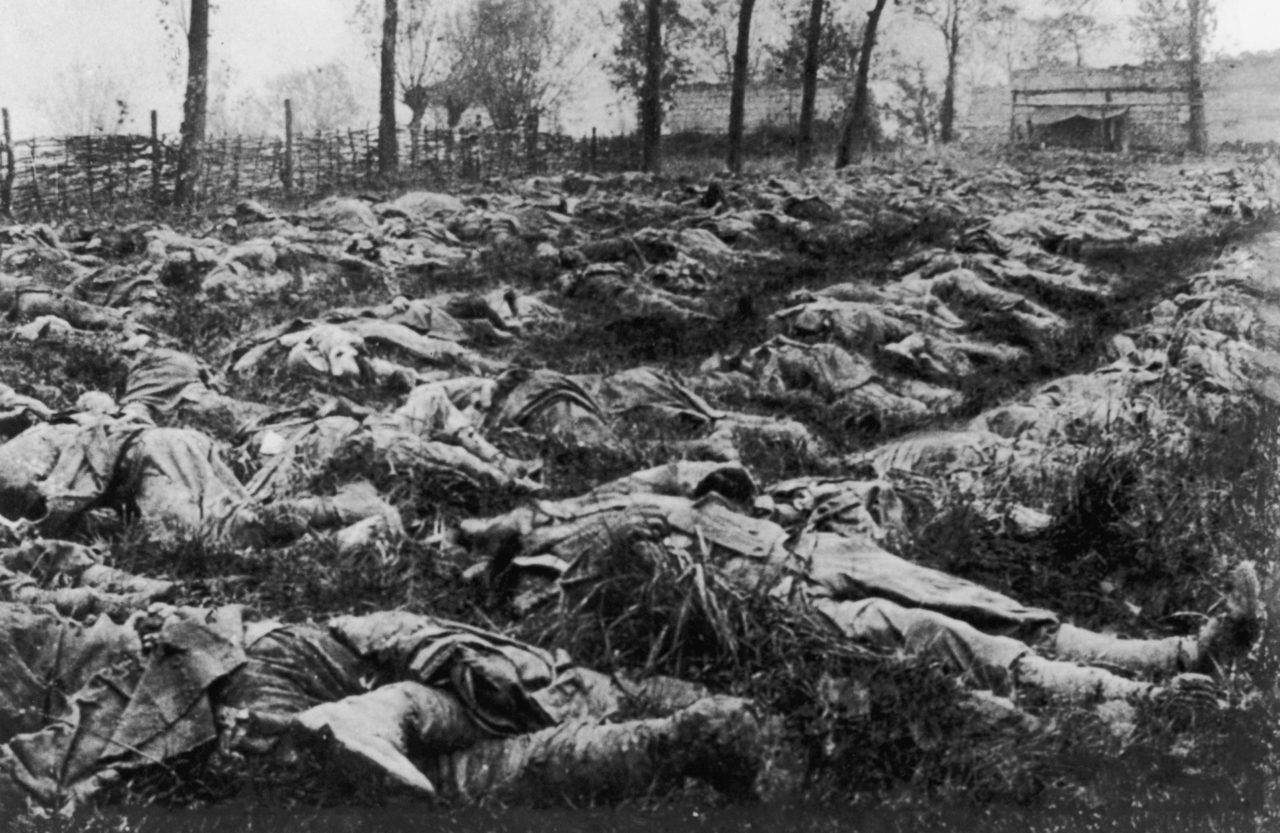 Dead bodies laid out for burial in a field in Artois, Northern France, 1915. (Hulton Archive/Getty Images) 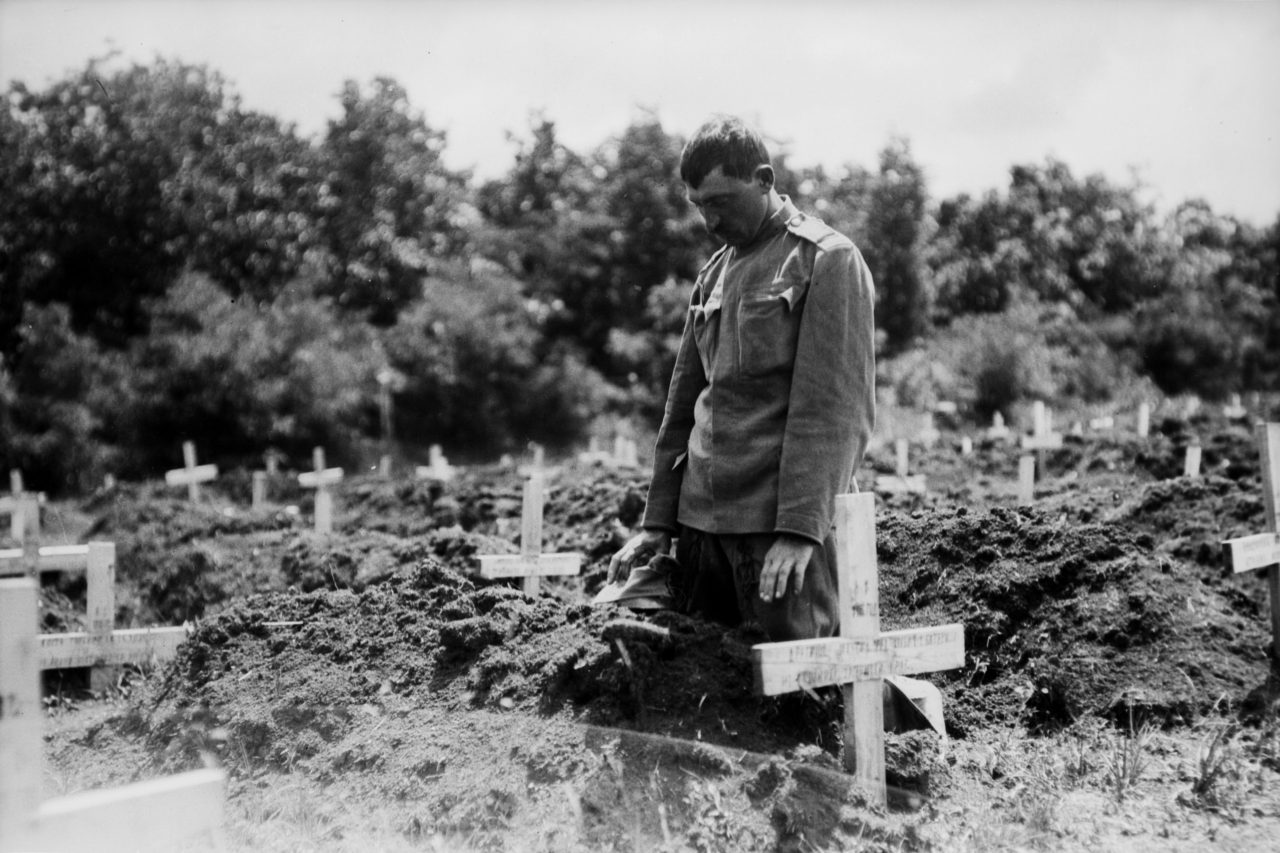 A soldier paying his respects to a fallen comrade in Belgrade, World War One. (Topical Press Agency/Getty Images)

It seems to Virgil that a similar ending is happening now.  The American Establishment might know, down deep, that it has screwed up in its hubris—although, of course, that can never be admitted publicly.  Can’t show weakness to the proles!

Nevertheless, the Establishment is visibly growing nervous.  In its jitteriness, it is clapping wildly, and inappropriately, for those who still hold to the fading faith—such as the McCain family.

Yet most of all, the Establishment is raging against the dying of the light.  Amidst the hot lights and the hot rhetoric of the McCain funeral-turned-festival, the elites know that this is their political twilight and that dusk is giving way to nightfall.

And yet Establishmentarians fear, most of all, that a new and different sun is rising.