Nearly 600,000 illegal aliens will successfully enter the United States through the southern border this year, according to projections by Princeton Policy Advisors.

Researcher Steven Kopits projects that for Calendar Year 2019, about 843,000 border crossers and illegal aliens will have been apprehended by Border Patrol agents, including 309,000 child migrants and nearly 300,000 adult border crossers who arrive alone.

Already, illegal immigration at the U.S.-Mexico border this year has reached a level — with more than 811,000 border crossers and illegal aliens being apprehended since October 2018 — that has not been experienced since Fiscal Year 2008 when the Obama administration saw more than 705,000 apprehensions at the border. 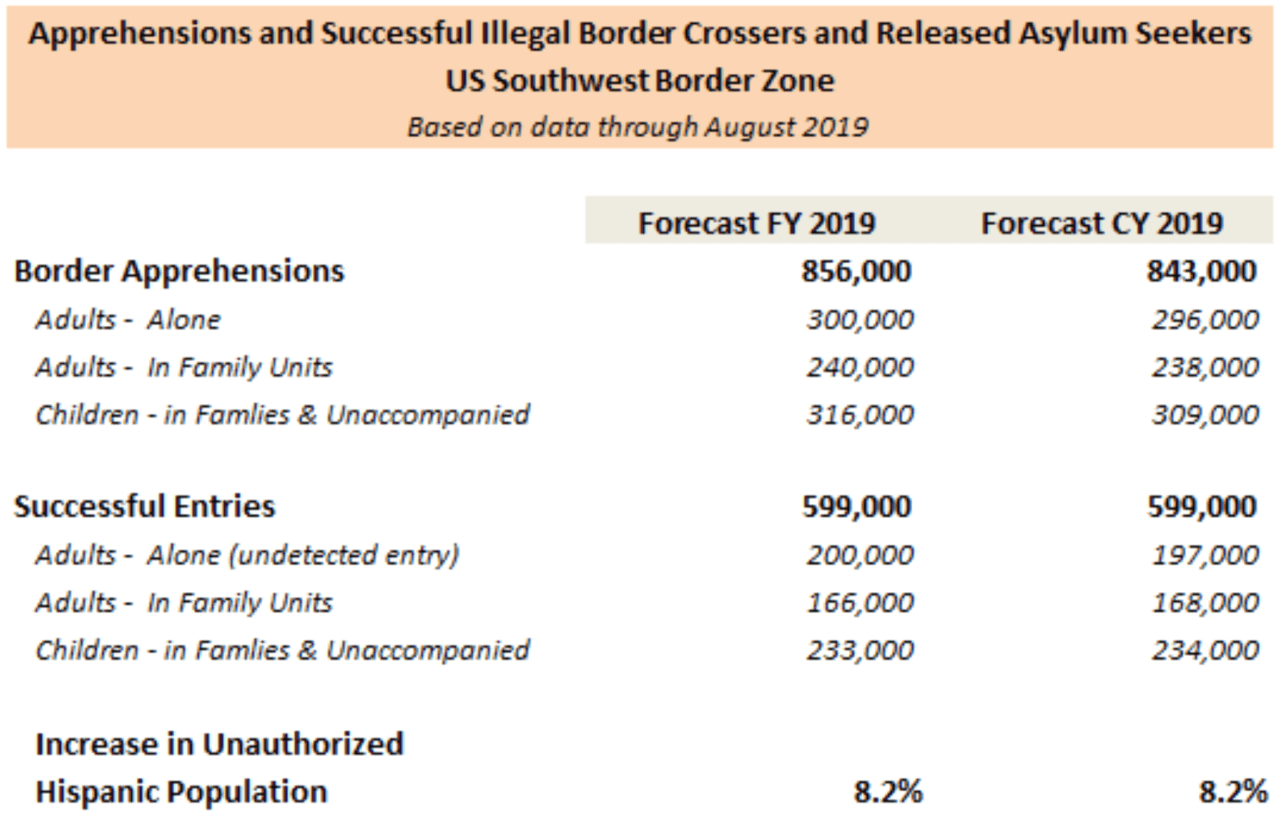 Kopits projects that in Calendar Year 2019, nearly 600,000 illegal aliens will have successfully crossed into the U.S. through the southern border, undetected by Border Patrol agents. About 200,000 of these illegal aliens, Kopits finds, could be adult border crossers who arrive alone and 234,000 are projected to be children who arrive unaccompanied and with adults.

Close to 170,000 of those 600,000 illegal aliens expected to successfully enter the U.S., Kopits projects, could be adult border crossers who brought children with them to the southern border.

Should these totals pan out by the end of the year, Kopits finds that the illegal Hispanic population in the U.S. will increase by more than eight percent as a result. This rate of illegal immigration comes in addition to the roughly 225,600 border crossers and illegal aliens who have been released by the Department of Homeland Security (DHS) into the interior of the U.S. since December 21, 2018.

While providing a cheap labor pipeline for businesses and corporations, an increase in the illegal population means more foreign competition for America’s working and middle class in the labor market, and wage suppression.

Extensive research by economists like George Borjas and analyst Steven Camarota reveals that the country’s immigration system — where more than 1.5 million foreign nationals are admitted every year — burdens U.S. taxpayers and America’s working and middle class while redistributing about $500 billion in wealth every year to major employers and newly arrived immigrants.

Camarota’s research has found that for every one percent increase in the immigrant portion of American workers’ occupations, their weekly wages are cut by about 0.5 percent. This means the average native-born American worker today has his weekly wages reduced by perhaps 8.75 percent.