The 2020 March for Life is set for January 24, 2020 on the National Mall in Washington, D.C. On Tuesday the pro-life organization and its supporters gathered on Capitol Hill to announce the theme for this year’s event: “Life Empowers: Pro-life is Pro-Woman.” 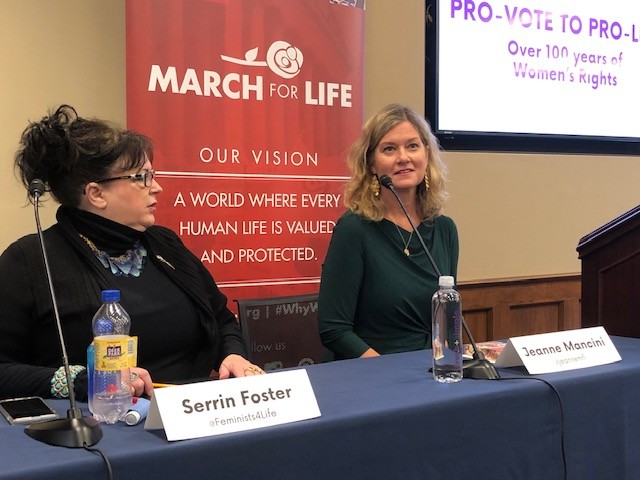 Jeanne Mancini, president of the March for Life, right, and Serrin Foster of Feminists for Life, spoke on Capitol Hill on Tuesday to announce the them of this year’s event set for January 24, 2020. (Penny Starr/Breitbart News)

March for Life President Jeanne Mancini said there are confusing messages about what it means to be pro-woman, with Planned Parenthood and other abortion advocates claiming that choosing to end the life of an unborn baby somehow empowers women when the opposite is true.

And the left now embraces abortion as something that’s not only routine but worth celebrating.

“It’s gone from ‘safe and rare’ to ‘shout your abortion,’” Mancini said.

Speakers also said that the message that somehow motherhood limits a woman is also wrong if that woman facing an unplanned pregnancy gets the support she needs during and after her baby is born.

This year’s march also coincides with the 100 anniversary of the 19th Amendment to the Constitution that granted women the right to vote. And those women who fought for the right to vote, including Susan B. Anthony, Alice Paul, and Elizabeth Cady Stanton, were passionately in favor of protecting the unborn, Mancini and other speakers at the event said.

In a video created to promote the March, which has taken place every year since the United States Supreme Court ruled to make abortion on demand the law of the land in Roe v. Wade in 1973, the narrator speaks out about being a woman:

My mind, my lips, my soul, my hips, my fertility. Inner, outer beauty, and all the things that make me she.

We women are strong, intuitive, compassionate, and valuable. Smart, caring and nurturing, capable and powerful. We are lawyers, mothers, poets, politicians and teachers. Doctors, daughters, wives, artists, sisters. We are leaders.

The woman said we should celebrate “our founding feminists” for fighting for the right to vote and for the unborn.

“They called abortion the ultimate exploitation of women,” the women in the video said.

She also praised “Jane Roe” or Norma McCorvey, the woman in the landmark abortion decision who came to believe abortion was wrong and “spent the rest of her life trying to undo the law.”

The woman in the video notes that it cannot be pro-woman to abort more than 30 million female babies since the High Court’s ruling.

She challenged pro-life advocates to use their ancestors as inspiration for this year’s March, which continues to have the same goal year after year: “Make abortion unthinkable in our society.”

“Ladies let’s fight like them and be a voice for the voiceless,” the woman says.