A “tidal wave” of mass immigration has “tilt(ed) the field toward the Democrats” in the state of Virginia, the New York Times admits.

Last week, Democrats took control of Virginia’s House of Delegates and the State Senate. Now, the Democrats hold power over the state’s legislature, the governor’s seat and the lieutenant governor’s seat — the first time since 1993 that this has occurred.

The New York Times now admits that four to five decades of mass immigration — where about 1.2 million legal immigrants are admitted to the United States every year — has shifted Virginia into a blue state:

Not long ago, this rolling green stretch of Northern Virginia was farmland. Most people who could vote had grown up here. And when they did, they usually chose Republicans. [Emphasis added]

The fields of Loudoun County are disappearing. In their place is row upon row of cookie-cutter townhouses, clipped lawns and cul-de-sacs — a suburban landscape for as far as the eye can see. Unlike three decades ago, the residents are often from other places, like India and Korea. And when they vote, it is often for Democrats. [Emphasis added]

“It’s a totally different world,” said Charles Poland, 85, a retired history professor whose family has lived in Loudoun County for four generations. His family farm is now dotted with subdivisions filled with four and five-bedroom homes that sell for $750,000. The family legacy is a road named Poland. “If my parents came back today, they wouldn’t recognize the place. The changes came like a tidal wave.” [Emphasis added]

As Breitbart News analyzed, Virginia’s foreign-born population has boomed over the last few decades. In 1990, Virginia was home to less than 312,000 foreign-born residents. Today, there are close to 1.1 million, almost four times what the population was three decades before. 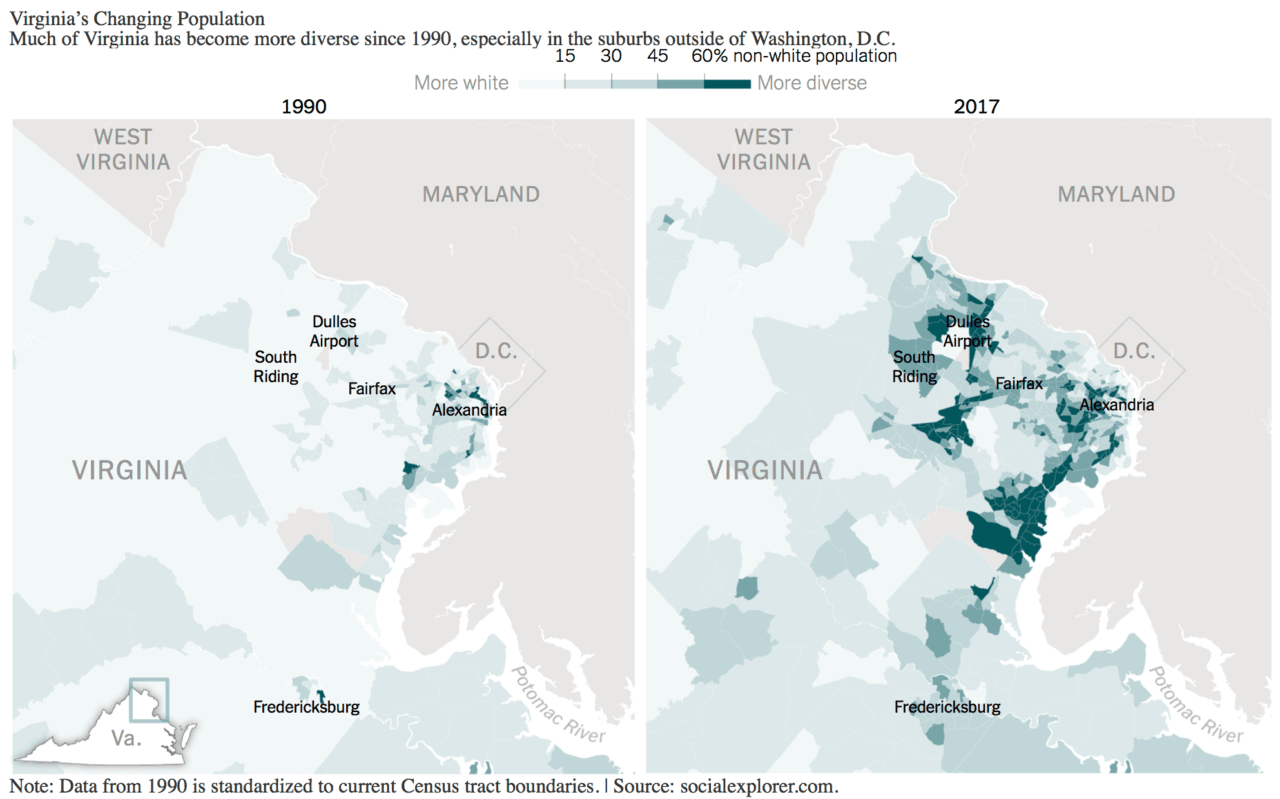 A 38-year-old immigrant from India interviewed by the New York Times explained that he voted for Democrats in the recent Virginia election because he supports gun control measures, calling it the “most pressing issue” for him.

Under current legal immigration levels, the U.S. is on track to import about 15 million new foreign-born voters in the next two decades. Those 15 million new foreign-born voters include about eight million who will arrive in the country through chain migration, whereby newly naturalized citizens can bring an unlimited number of foreign relatives to the country.

Republicans’ electoral prospects are only expected to get worse because of historically high legal immigration levels, according to research by Axios and the Atlantic.

Ronald Brownstein, senior editor for the Atlantic, noted this year that nearly 90 percent of House congressional districts with a foreign-born population above the national average were won by Democrats. This means that every congressional district with a foreign-born population exceeding roughly 14 percent had a 90 percent chance of being controlled by Democrats and only a ten percent chance of electing a Republican.

The impact of legal immigration levels was evident in the 2016 election despite President Trump’s victory over Hillary Clinton. Among native-born Americans, Trump won 49 percent to Clinton’s 45 percent, according to exit polling data. Among foreign-born residents, Clinton dominated against Trump, garnering 64 percent of the immigrant population’s vote compared to Trump’s mere 31 percent.