Bosses of a powerful service industry union in Las Vegas, Nevada, are going after 2020 Democrat presidential primary candidate Sen. Bernie Sanders (I-VT) for his plan to strip union workers of their negotiated healthcare plans in favor of Medicare for All.

Less than two weeks before the Nevada Democrat Caucus on February 22, the Culinary Union is posting flyers in the back of restaurants, bars, and hotels along the Las Vegas strip to warn their 60,000-strong union worker membership against Sanders, according to the Nevada Independent:

A spokeswoman for the Culinary Union said the flyer is also going out to members Tuesday night via text and email. [Emphasis added]

The Culinary Union provides health insurance for about 130,000 of its members and their family members, negotiated plans that Sanders’ Medicare for All agenda would end.

Union bosses have deep-rooted ties to former Senate Minority Leader Harry Reid (D-NV). The two political machines worked together in the 2016 Democrat presidential primary to turn out voters where Hillary Clinton won the majority of delegates that year in the state against Sanders.

A copy of the flyer also shows the union bosses’ significant support for mass illegal and legal immigration to the United States — an effort to drive up union membership. The flyer praises the 2020 Democrat presidential primary candidates for their support of former President Obama’s Deferred Action for Childhood Arrivals (DACA) program that allowed hundreds of thousands of illegal aliens to remain in the U.S. 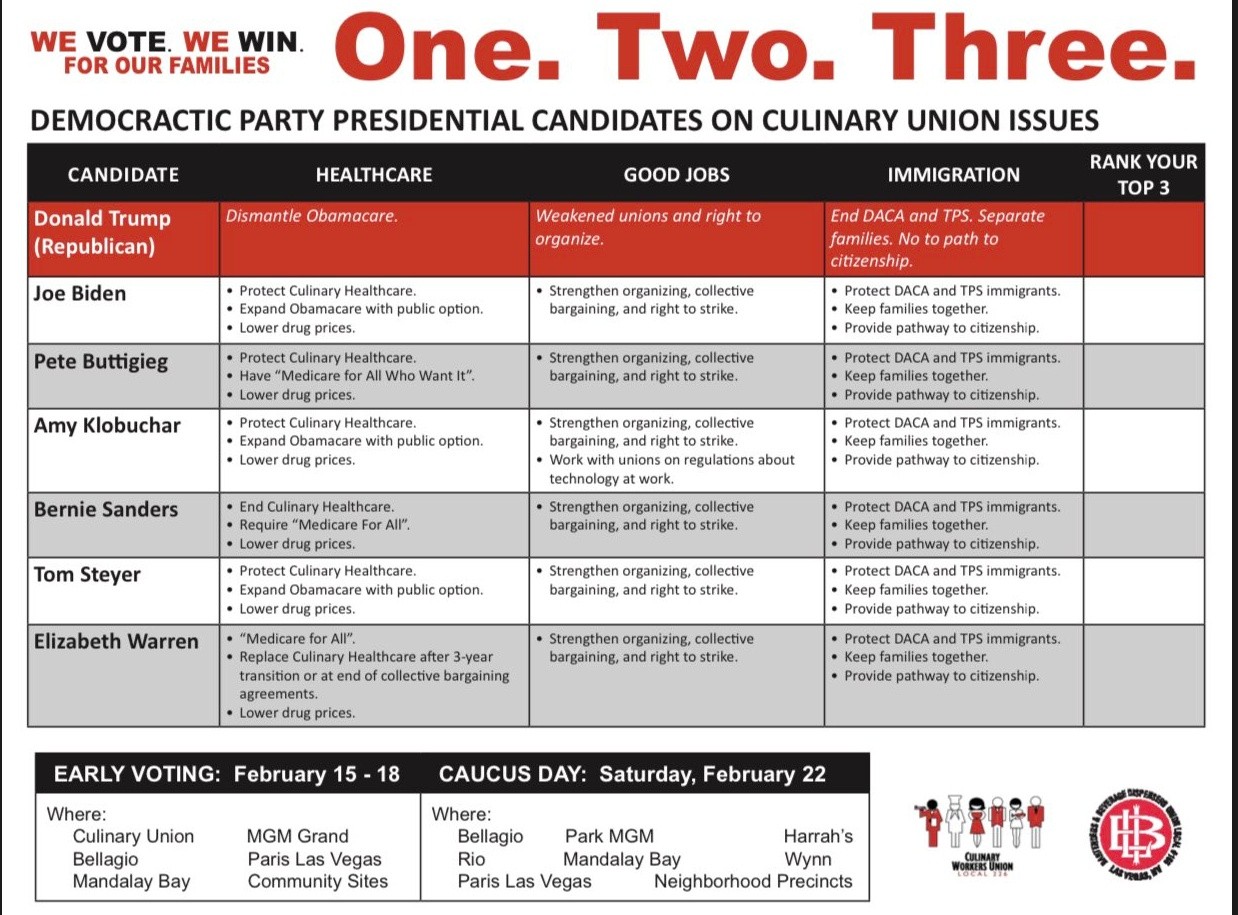 In Nevada, Sanders has already made headway with public sector unions, earning the state’s largest teacher union endorsement last month. The endorsement came even as Sanders has regularly admitted that his Medicare for All agenda will “absolutely” erase the negotiated healthcare plans of millions of American workers and public sector employees.

Months ago, members of the Culinary Union heckled Sanders over his plan to kick them off their current healthcare plans, shouting, “Union healthcare! Union healthcare!” during the town hall.

“Wouldn’t the Medicare plan — wouldn’t that take away our right to bargain for our medical benefits?” a town hall attendee asked Sanders.

“Yeah absolutely it would,” Sanders said. “It’s not a bad thing.”