President Donald Trump on Monday celebrated at the White House press conference that America was leading the world on coronavirus testing.

“In the span of just a few short months we’ve developed a testing capacity unmatched and unrivaled anywhere in the world, and it’s not even close,” Trump said.

The president shared a chart showing the number of tests conducted by the United States per capita compared to other countries. 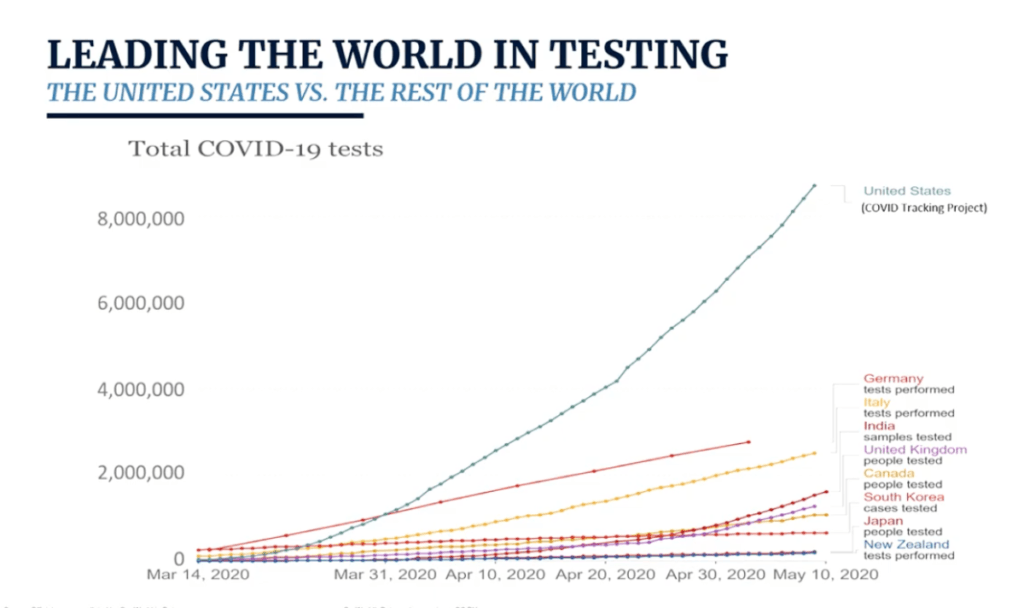 “This doesn’t happen by accident,” Assistant Secretary for Health Adm. Brett P. Giroir, M.D said. “The people sitting up here in the front have been working literally 18-20 hours a day, every single day of the week for at least the past two months.”

Trump noted that the United States was conducting about 300,000 coronavirus tests per day and would complete over ten million tests by the end of the week.

“We have met the moment and we have prevailed,” Trump said about the testing success. “Americans do whatever it takes to find solutions, pioneer breakthroughs, and harness the energies we need to achieve a total victory.”

The president noted that leading pharmacies and retailers had set up over 240 testing sites across the country as well as a focus on urban communities. Testing, he explained, was a key part of reopening America for business.

“This is a core element of our plan to safely and gradually reopen America, and we’re opening and we’re starting, and there’s enthusiasm like I haven’t seen in a long time,” he said.

He said that the administration was working with governors to make sure they had the supplies and ability to boost testing levels. The administration also announced plans to send $11 billion in funding to states to help fund their testing efforts.