Progressive leaders worked overtime to remove the taboo around the word “socialism” and fundamentally altered the Democratic Party’s future – a future they hope to impose on the nation as a whole, as Breitbart News senior editor-at-large Joel B. Pollak details in his upcoming book, RED NOVEMBER.

The book is based on Pollak’s own experiences covering the Democratic Party presidential primary on the campaign trail. 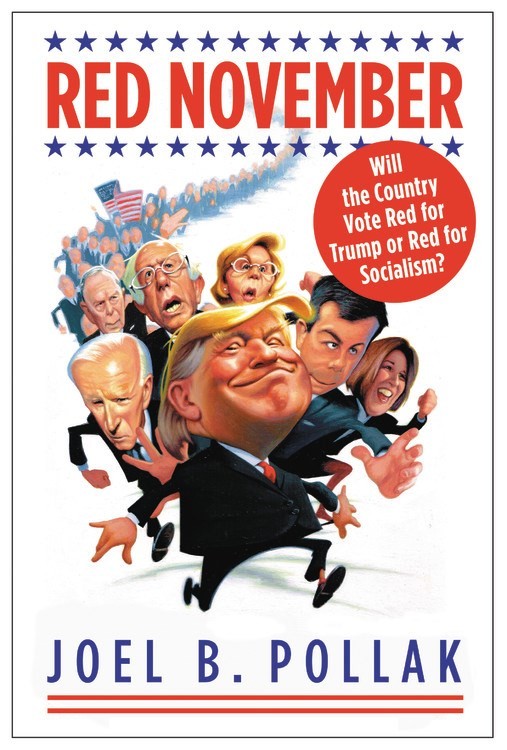 In it, Pollak relates how the Democrat Party entered uncharted territory in 2019, as Sanders, whose ideas were once considered too radical to be embraced by the mainstream left – took center stage. He entered the presidential arena with the intention of finishing what he started during the 2016 election: It was time for a political revolution in the United States, he declared.

The Vermont socialist pitched his presidential run as a “movement” rather than a presidential campaign alone. It was a “multi-­generational, multi-racial, grassroots movement,” he said, telling his excited supporters on the campaign trail, “Let’s transform this country.”

He soon earned the endorsements of three of four members of the freshman “Squad,” who proudly owned the “democratic socialist” label once considered taboo.

One would be hard-pressed to explain Joe Biden’s current leftward political trajectory without recognizing the impact Sanders’ movement played on moving the party, and the presumptive nominee, across old “moderate” political boundaries – boundaries Democrat politicians had become accustomed to hiding behind, particularly during elections, traditionally moving to the center rather than further to the left.

Biden has emerged as “arguably the most left-wing Democratic Party nominee ever,” as Pollak details in RED NOVEMBER:

Former vice president Joe Biden, who led the polls throughout the early months of the campaign, was the most left-wing front-runner in American political history. He promised to raise taxes immediately, end the use of fossil fuels, and use federal taxpayers’ money to pay for abortions, among other proposals. … And, like his rivals, he proposed to make health care free for illegal aliens.

Sanders’ full embrace of socialism essentially opened the door for the establishment media to portray the former vice president as a “moderate,” despite his new, radical positions. Biden’s promise to eliminate fossil fuels did not pack the same punch as Sanders’ sweeping plan for a $16 trillion Green New Deal. Sanders’ call to decriminalize border crossings and restructure U.S. Immigration and Customs Enforcement (ICE) lessened the impact of Biden’s brazen pledge to halt the deportation of criminal illegal aliens from the United States in his first 100 days in office. And Biden’s commitment to building on Obamacare paled in comparison to Sanders’ blunt admittance of raising taxes on the middle class to implement a single-payer health care system in the U.S.

Yet the proposals presented by both candidates were among the most radical ever offered during a Democrat presidential campaign.

With that agenda on the ballot, Democrats would “either bring their party to ruin—or usher in a new United Socialist States of America,” as Pollak observes.

While the socialist revolution, once again, failed to materialize with Sanders as its leader (following the Democrat establishment’s strategic move in thwarting the senator’s campaign just 72 hours prior to Super Tuesday), the left’s crusade for a socialist America lives on. And while the Democrat establishment tends to view the former vice president as more palatable to the independent voter in a general election matchup, Biden has since moved even further to the left, working with Sanders and his political posse of far-left supporters, one of whom recently called for the dismantling of the America’s economic and political systems.

Biden removed all doubt following the release of the “Biden-Sanders Unity Task Force” proposal, commissioned by both figures.

Far-left Democrats like Rep. Alexandria Ocasio-Cortez (D-NY), who played a significant role in crafting the climate change portion of the proposal as co-chair of the Climate Task Force, bragged that members had “meaningfully & substantively improved Biden’s positions.”

The 110-page vision offers ideas that would have once been considered far too radical for any mainstream political campaign. It proposes a commission to study and recommend remedies or “reparations,” ushering in an end to cash bail, repealing so-called ‘right to work’ laws, ending the construction of the border wall, and rejoining the Paris Climate Agreement, among other proposals.

Now, Sanders – whom many credit for popularizing socialism, ridding it of negative connotations associated with the failed ideology as seen in countries like Venezuela — believes Biden has the potential to be the “most progressive president since FDR.”

Biden’s embrace of socialist ideals, in the context of a global pandemic and the left’s ongoing culture war — hallmarked by riots, violence, government overreach, and fake news — shows that, once again, America is standing at a crossroads.

“And it is the story Andrew Breitbart anticipated a decade ago: that America would increasingly face a clear choice between Tea Party and Occupy—between the restoration of its founding ideals or a democratic socialist revolution in the style of the rivals America had defeated,” Pollak writes.

RED NOVEMBER will be published July 14. It is available for pre-order.