Gutiérrez-Boronat – the co-founder of the Cuban Democratic Directorate, a human rights non-profit – joined a coalition of Cuban, Venezuelan, Nicaraguan, Chilean, Uruguayan, and other groups to create a “patriotic committee” responsible for the event. The caravan doubled as both a public display of rejection to left-wing totalitarianism and a “drive-in” seminar on the history of communism – participants tuned into Miami’s 670 AM La Poderosa to listen to experts, including this Breitbart News journalist, discuss the destructive history and legacy of communism around the world.

Gutiérrez-Boronat told Breitbart News that the success of the event – particularly in attracting people of all ages, nationalities, and backgrounds – was unprecedented in decades of activism against socialism. 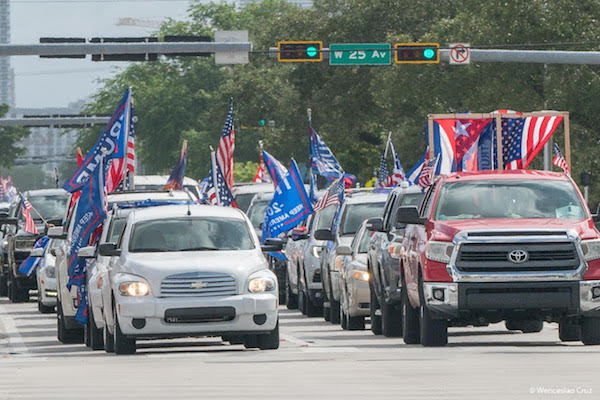 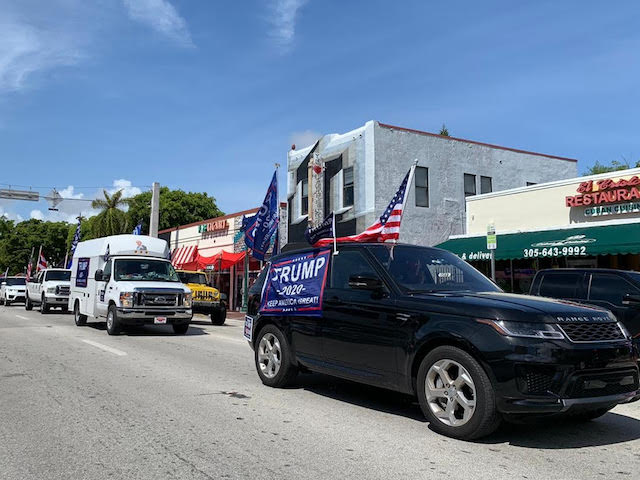 “This community is more united than ever,” Gutiérrez-Boronat said, describing the crowd at the event as “Cubans of all makes and models, from el exilio historico [the historic Cuban exile community] to recent arrivals, young and old; a strong Nicaraguan presence; some Venezuelans and Colombians; a Puerto Rican contingent.” 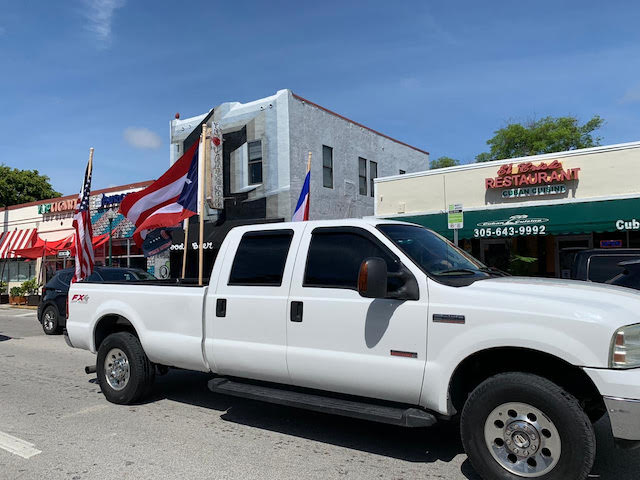 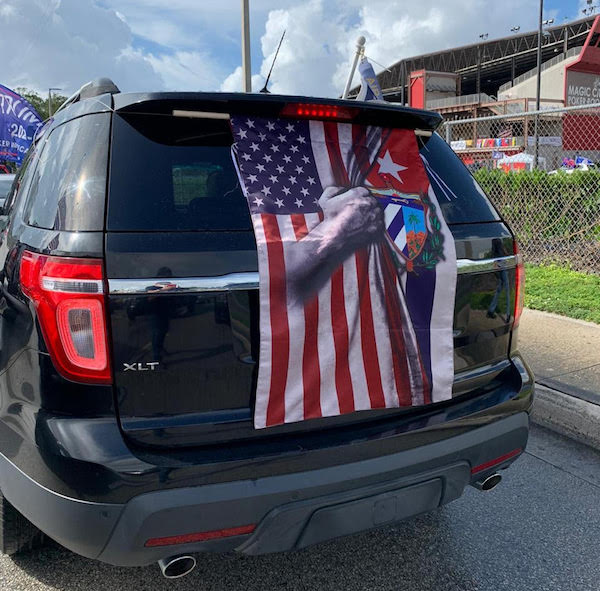 A composite flag featuring the U.S. and the seal of the Republic of Cuba. (Picture courtesy of Daniel Quiróz/Cuban Democratic Directorate) 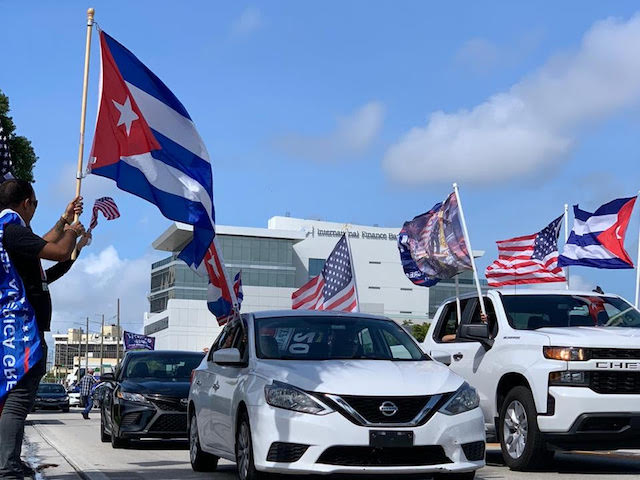 Gutiérrez-Boronat added that the size of the event – according to Miami police, he said, 30,000 vehicles participated, an unprecedented number – was just part of why it was different from other political moments in the past.

“It’s intergenerational because it spans different times of arrival (waves of migration) … it’s focused on anti-communism and anti-socialism,” he explained. “There is clear leadership and strategy. … All the main organizations are working in the same direction.”

The organizer hailed the event as representative of the “organic unity of a plural community unified against communism, que no le van a hacer cuentos [who won’t be fooled].”

This led some media outlets to falsely identify the event as a “Trump caravan,” which Gutiérrez-Boronat rejected. 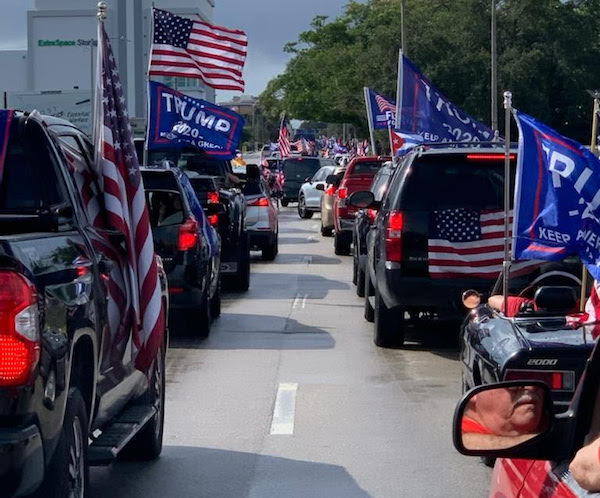 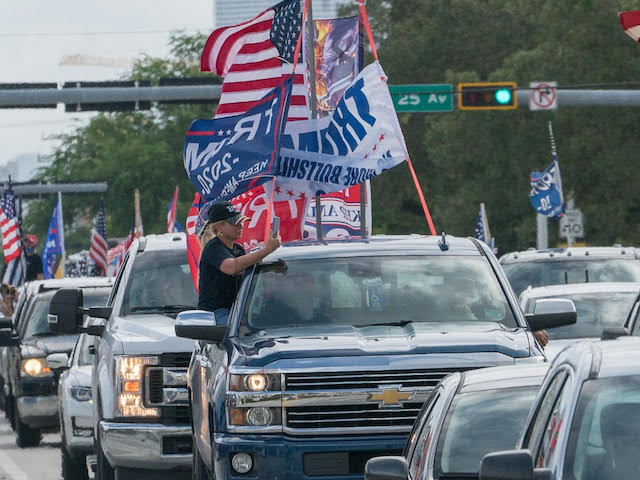 Not only were supporters of Democrat Party candidate Joe Biden welcome at the caravan – one, Gutiérrez-Boronat said, showed up holding a Biden sign. “Nobody bothered him,” he noted.

A small group of “less than ten” socialists also showed up, Gutiérrez-Boronat said, but left after their brief presence went largely ignored. Miami police reported no violence or significant disturbances.

Outside of Miami, the caravan generated two sister events in Uruguay and Chile. Chile, in particular, has suffered a wave of violent leftist rioting throughout the past year that has left much of its capital, Santiago, destroyed – prompting pushback from the family-oriented citizens and those concerned that nefarious leftist elements on the continent, most prominently in Venezuela, were planning an expansion into their country.

Some Cubans on the island also attempted to form a “caravan” of their own; any expression of anti-socialist or anti-communist sentiment in Cuba is a crime.

Journalists Esteban Rodríguez and Héctor Luis Valdés Cocho held up signs from their balconies reading “no more repression, no more fines, down with communism,” resulting in the arrival of six state security agents, two police cars, and two police motorcycles to their homes to intimidate them into silence.

National Hispanic news outlets largely ignored the event, according to an analysis by Newsbusters, though some assigned it to local affiliates:

Telemundo did send a local crew, and filed a report on the local Miami affiliate’s website. But so far, no video of the report on the caravan has been uploaded to social media where it can be easily shared by viewers and members of the community. But even Telemundo’s meager effort is far better than Univision’s outright omission- as if this massive anti-communist caravan never even happened. 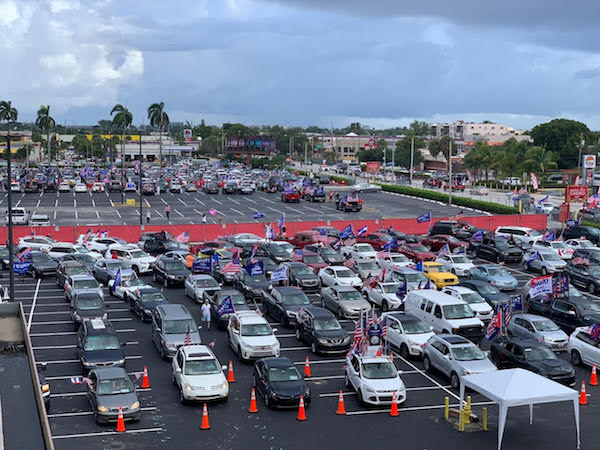 At least one local news outlet also attempted to claim that only “hundreds” attended the event, while also reporting the presence of 30,000 vehicles, bizarrely suggesting the majority of the vehicles in the parade were self-driving.