The Boston Herald formally endorsed President Trump for reelection one week from Election Day, describing Joe Biden’s (D) platform as “a risky love letter to social justice warriors and those who believe capitalism is the root of all evil.”

In a Tuesday endorsement penned by the editorial staff, the Herald recognized that the left’s devotion has been, solely, to remove Trump from office — an objective it has held since 2016. While Biden “allegedly offers a return to ‘normalcy,’” the Herald asked, “But, what’s normal in 2020?”

“Biden’s platform is a risky love letter to social justice warriors and those who believe capitalism is the root of all evil,” the Herald wrote, citing Biden’s plans to increase the corporate tax rate and a corresponding economic study “which concluded that corporate tax hikes lead to a substantial decrease in wages and spending, and spurred businesses to move out of the country.”

The Herald raised concerns regarding Biden’s big government plans — which include universal pre-k, free community colleges, and climate-related initiatives — as well as the former vice president’s pledge to create one million jobs in the auto industry:

Biden has also pledged to create “one million new, well paying jobs in the American automobile industry” — a neat trick following massive job cuts in recent years by auto manufacturers. Part of the reason for those cuts can be traced to a decline in global light vehicle sales, fueled by drops in demand in China and India. As the global economy has taken a wallop due to the coronavirus pandemic, one wonders how demand will shoot up to the point that job cuts can be reversed, and jobs added.

However, most “disconcerting,” the paper said, is Biden’s seeming embrace of radical left ideas.

The Herald referred to Biden’s platform as a “potluck of agendas pushed by far-left party members such as Bernie Sanders and Alexandria Ocasio-Cortez,” mentioning the Biden-Sanders Unity Platform, which contains several radical pitches including the creation of a commission to recommend and study reparations.

That aside, before the Chinese coronavirus struck, Trump’s economy was “going gangbusters,” the Herald said, noting the historically low unemployment rate, particularly among minority communities.

Ultimately, the editorial staff concluded, Trump seeks to put America first in every avenue — in “trade, defense, the courts and, again, the economy.” 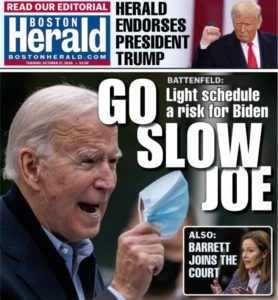 “He’s what America needs right now, decisive action to get us back to pre-pandemic strength — not an unfeasible spending spree in the name of a progressive utopia,” the Herald said. “The Boston Herald endorses Donald Trump for president.”

Four years ago, the Herald refused to make an endorsement, instead urging readers to “look deep into their own consciences — as we will all have to do — and do the best they can.”