A congregation of Orthodox Jews prayed for President Donald Trump’s victory on Election Day, in a prayer that was captured on video Tuesday morning.

A young man, leading prayer for “the president’s victory today, for four more years,” appeared in the video, wearing a “Keep America Great” flag in place of a traditional prayer shawl. The video was filmed at an unnamed synagogue during morning prayers,

The young man recited a traditional benediction, modified for the presidential election, which has been making the rounds among Jews on social media, and appears to originate with an organization called the Jewish Business Network.

The video of the prayer, the Hebrew version, and a rough English translation, follow: 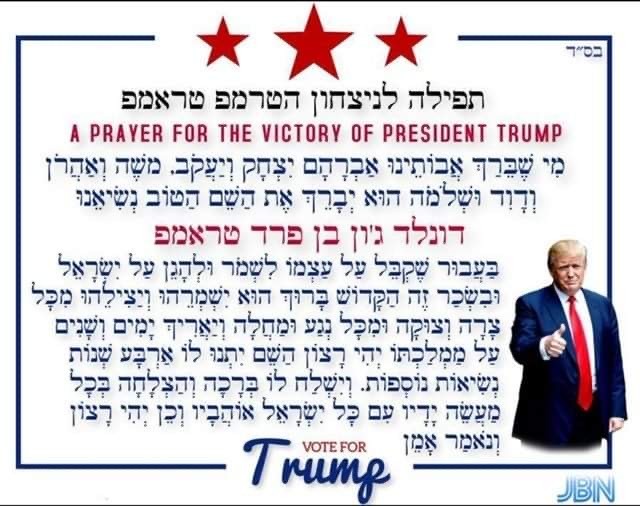 May He who blessed our Forefathers, Abraham, Isaac, and Jacob, Moses and Aaron and David and Solomon, bless the good name of our president Donald John, son of Fred Trump, because he has taken upon himself the task of guarding  and defending Israel. In this merit, may the Holy One, Blessed be He, protect and deliver him from all trouble and distress, and from all affliction and illness, and may He lengthen the days and years of his presidency. May it be the will of the Lord that he be given four additional presidential years, and may He send blessing and success to him in all his endeavors with the people of Israel, who love him, and may this indeed be His will, and let us say: Amen.

He added: “May God also bless Joseph Biden to remain a private citizen for the rest of his life.”

The hashtag “#JEXIT” refers to an effort to urge Jews to leave the Democratic Party.