His Fraudulency Joe Biden has sat in the Oval Office for a week now, and his job approval rating is still stuck in the 40s — 48 percent to be exact.

There has been no honeymoon for His Fraudulency.

Biden has been stuck below 50 percent since he entered office, and still is.

Never in my life do I remember an incoming president not receiving some kind of honeymoon period, where the public, even those who didn’t vote for him, gave him the benefit of the doubt and hoped for the best. 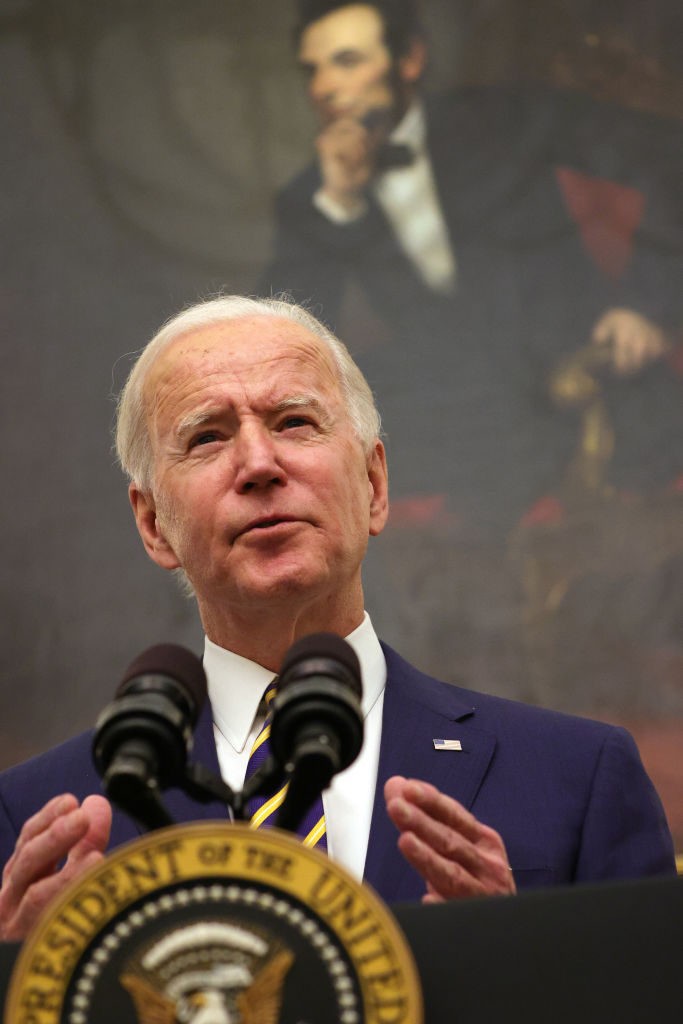 U.S. President Joe Biden speaks during an event on economic crisis in the State Dining Room of the White House in Washington, DC. President Biden spoke on his administration’s response to the economic crisis that caused by the COVID-19 pandemic and signed two executive orders. (Alex Wong/Getty Images)

What’s more, Rasmussen Reports, one of only a handful of pollsters that are legitimate, that don’t rig their polls, shows His Fraudulency’s “strong disapproval” rating is 40 percent, compared to just 35 percent who “strongly approve.” On that front, Hunter’s Dad is five points underwater.

The fake media are still up to their old games with their rigged polls. Last week, Reuters/Ipsos had Biden’s job approval at a laughable 57 percent, while the totally discredited Morning Consult had him at 56 percent approval.

These are both fake polls. We know that now.

In one election cycle after another, these polls, and a whole herd of others, have been discredited. Rasmussen has a proven track record you can trust.

Biden’s 48 percent approval rating today is even worse when you remember that a majority of the country do not approve of the job he’s doing despite billions and billions of dollars spent by the corporate media to prop him up, despite a 24/7 propaganda campaign being waged by Big Media, Big Tech, Big Entertainment, and Big Academia. Never has a sitting president enjoyed this kind of sustained, billion-dollar bootlicking.

And yet, it’s not working…

Well, why would it, when alternative media can get the word out?

And because we are getting the word out, a majority of the public do not approve of the job His Fraudulency is doing because a majority of the public know, that in just one week, Biden’s admitted he lied throughout his campaign about having a plan to stop the spread of the coronavirus, he announced a goal of vaccinating 100 million people in 100 days when President Trump was already doing this, he destroyed women’s sports, released illegal aliens into neighborhoods already struggling with job losses and crime, he refuses to deport illegals as migrant caravans approach, he’s  killed tens of thousands of jobs (while releasing illegal aliens to compete for jobs), he’s declared war on cheap energy, called for the impeachment of a private citizen, repeatedly violated his own stupid and useless mask mandate, and allowed for the kind of mistreatment of American troops that would violate the Geneva Conventions.

Well, this is what happens when a great country mails out tens of millions of unsolicited ballots during a presidential election.