Thousands of demonstrators took to the streets of major U.S. cities on Saturday, attacking Israel while voicing support for a string of pro-Palestinian demands.

AP reports traffic on a major thoroughfare in west Los Angeles was blocked as marchers stretchedfor two miles from outside the federal building to the Israeli consulate.

Flags and signs that said “free Palestine” were on display while shouts of “long live intifada,” or uprising, were made. 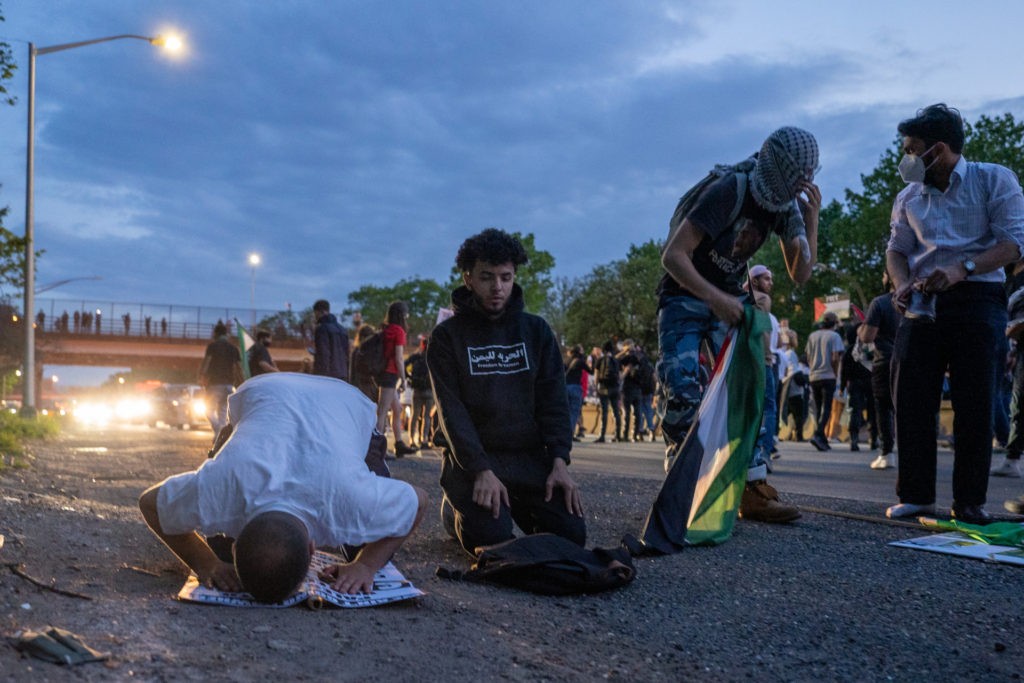 People stop to pray on the highway during a rally for Nakba Day in New York City. The commemoration of  Al Nakba, which literally translates to The Catastrophe refers to the exodus of 750,000 Palestinians amid Israels declaration of independence in 1947. (David Dee Delgado/Getty Images) 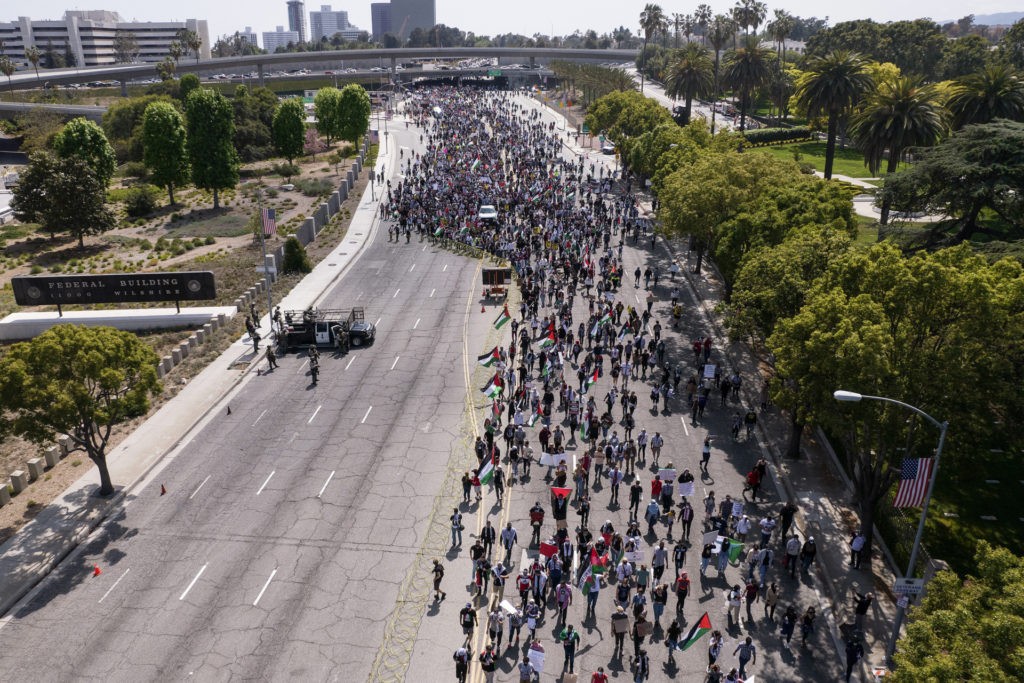 Thousands of demonstrators protest outside the Federal Building against Israel and in support of Palestinians during the current conflict in the Middle East, Saturday, May 15, 2021, in the Westwood section of Los Angeles. (AP Photo/Ringo H.W. Chiu)

A protest that started in a neighborhood in the Bay Ridge neighborhood of Brooklyn, New York, which has a large Arabic-speaking community, continued through the streets for several hours on Saturday afternoon.

Footage on social media showed people had climbed up the poles of street lights to wave flags while others set off fireworks.

They waved Palestinian flags and held placards that read “End Israeli Apartheid” and “Freedom for Gaza.”

As the sun set, some protesters walked onto the Interstate 278 shutting down traffic in at least on direction, according to video posted online.

In Atlanta, hundreds of pro-Palestinian demonstrators, including grandparents, teenagers and mothers and fathers with youngsters in tow, assembled downtown to wave signs and chant slogans, the Atlanta Journal Constitution reported.

A similar scene played out in Boston as protesters walked a short distance from Copley Square to the Israeli Consulate for New England, blocking traffic.

Footage on social media shows protesters unfurl a banner in the colors of the Palestinian flag with the words “Free Palestine” while standing on top of the awning of the building where the consulate is located.

Even as they marched, the Israeli government stood and thanked those countries that backed its right to self defense against the terror rocket attacks by Hamas terrorists.

Thank you so much to all of the countries who continue to support our 🇱 right to protect our citizens from terror. 🇴🇹🇳🇵🇾🇺🇾🇺🇸🇷🇱🇺🇹🇾🇿🇺🇹🇱🇹🇲🇳🇱🇲἟🇸🇺

Meanwhile in Philadelphia, thousands of demonstrators filled Rittenhouse Square to decry U.S. support for Israel and demand an end to Israel’s right to exist.

At a protest in Pittsburgh, one speaker called on lawmakers to put restrictions on how Israel can spend aid from the United States. 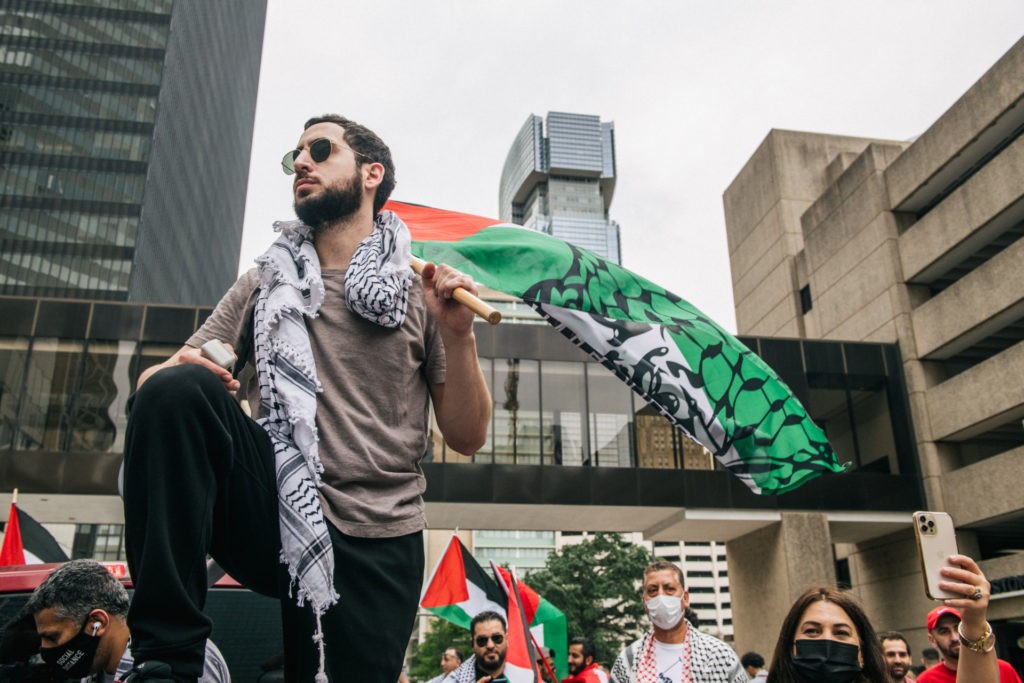 Mohammad leads a chant during a march to the Houston City Hall on May 15, 2021 in Houston, Texas. People gathered during a rally to show support for Palestinians facing Israeli airstrikes in the Gaza Strip. The death toll in Gaza continues to rise as the region is seeing the worst outbreak of violence since the 2014 Gaza war. (Brandon Bell/Getty Images)

The protests on Saturday followed a similar set that took to streets across America during mid-week protests against Israel.

As Breitbart News reported, downtown Chicago streets were flooded on that occasion by thousands of protesters damning Israel’s ongoing acts of self defense from attack by Palestinian terror rockets.

The demonstration occurred as Israel continued a military offensive to defend its borders that killed as many as ten senior Hamas military figures among others and launched air strikes that toppled two high-rise towers housing terrorist facilities.

Both Jerusalem and Tel Aviv have been subjected to terror rocket attacks directed by Hamas in the Gaza Strip.

Israeli President Benjamin Netanyahu made clear Israel’s actions remain no different from any other nation under direct attack.

Elsewhere on Saturday, several thousand demonstrated in Montreal, calling for “the liberation of Palestine.”

Protesters also denounced “war crimes” committed by Israel in Gaza and carried placards accusing Israel of violating international law during the protest in the center of the Canadian city.

Earlier, a caravan of cars sounded their horns and drove with Palestinian flags blowing in the wind as they protested outside the Israeli consulate in the western part of Montreal. 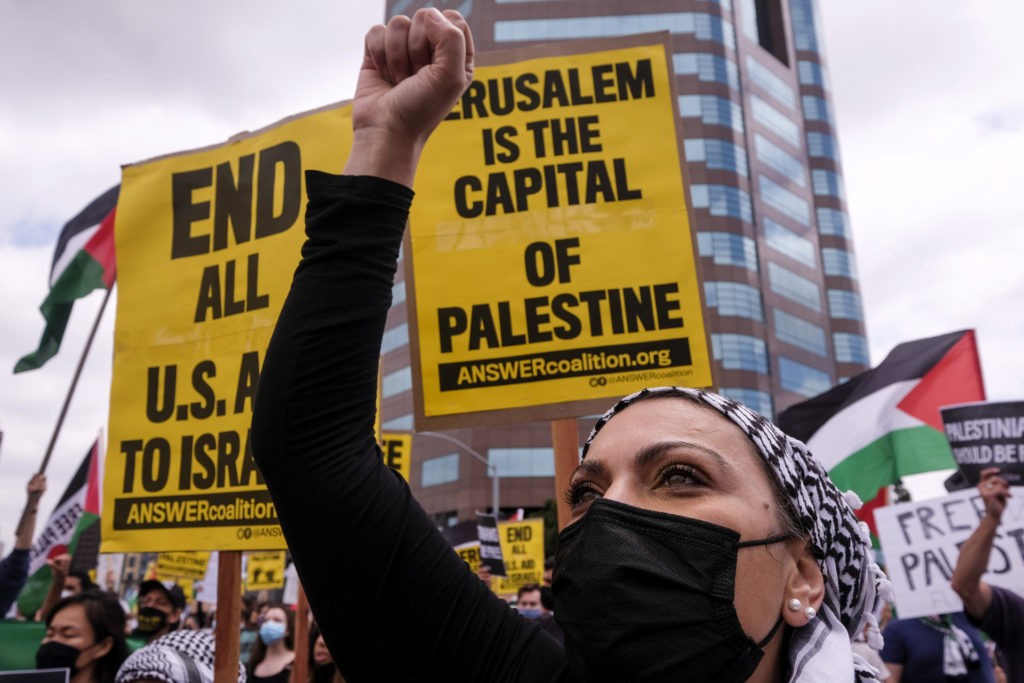 A demonstrator takes part in a protest outside the Federal Building against Israel and in support of Palestinians, Saturday, May 15, 2021 in the Westwood section of Los Angeles. (AP Photo/Ringo H.W. Chiu)