A multi-level building suffered a partial collapse early Thursday morning in Florida’s Miami-Dade County, with fire and rescue crews racing to the scene in response.

ABC News reports the building is located in the small, beachside town of Surfside, about six miles north of Miami Beach.

Authorities had no word yet on casualties or details of how many people lived in the building.

The collapse sent a cloud of debris through the neighborhood, coating cars up to two blocks away with a light layer of dust

Multiple police and fire departments from across Miami-Dade County are in attendance, according to the Miami Beach Police Department.

JUST IN: 7News has obtained surveillance video of the moment the Champlain Towers South Condo collapsed in Surfside early this morning.

According to a fire official, 35 people were pulled from the collapsed building. Search and rescue efforts ongoing. https://t.co/Ac7KgnJOSO pic.twitter.com/oeczbumRG9

MBPD and @MiamiBeachFire are assisting the Town of Surfside at a partial building collapse located at 8777 Collins Avenue in Surfside, Florida. Multiple police and fire agencies from across Miami-Dade are assisting. Please follow @MiamiDadeFire for updated information. pic.twitter.com/8tORIfZfjY

Fox News reports one witness, who was on vacation in the city with his family, was next door and said it sounded and felt like a tornado or earthquake. He said he believed much of the building was occupied.

He estimated the collapse occurred at about 1:20 a.m.

#MDFR is on scene of a partial building collapse near 88 Street & Collins Avenue. Over 80 MDFR units including #TRT are on scene with assistance from municipal fire departments. Updates will be provided on Twitter as they become available.

Some of the photos from the scene were devastating, the Fox News report added, and the building seemed to be well over 10 levels in scale.

Miami-Dade Fire Rescue tweeted that fire crews are on scene and said the building is located near 8877 Collins Avenue. There are over 80 units at the scene, along with other first response agencies.

The department has not yet said what may have caused the collapse. There were no immediate reports of injuries or casualties. 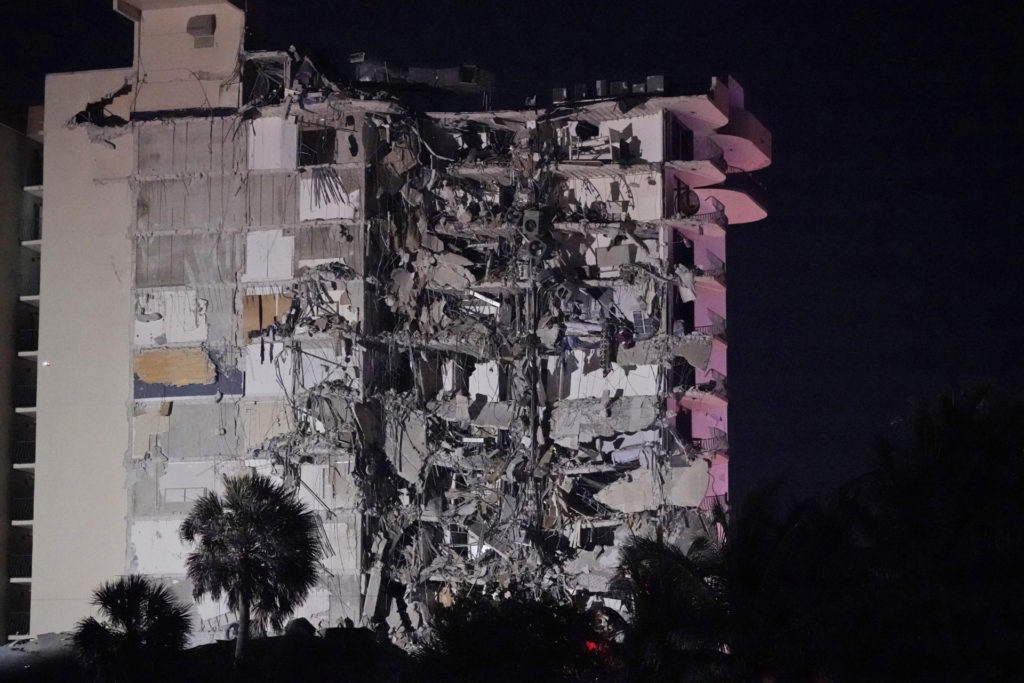 A partially collapsed building is seen early Thursday, June 24, 2021, in the Surfside area of Miami, Fla. Miami Dade Fire Rescue is conducting search and rescue. Authorities had no word yet on casualties, or details of how many people lived in the building. (AP Photo/Wilfredo Lee)

AP reports the sea-view condo development was built in 1981 in the southeast corner of Surfside, on the beach. It had a few two-bedroom units currently on the market, with asking prices of $600,000 to $700,000, an internet search shows.

The area is a mix of new and old apartments, houses, condominiums and hotels, with restaurants and stores serving an international combination of residents and tourists. The community provides a stark contrast from bustle and glitz of South Beach with a slower paced neighborhood feel.

This story is developing. More to come…